Planthoppers vibrate plants with a “snapping” organ as a mating call • Earth.com 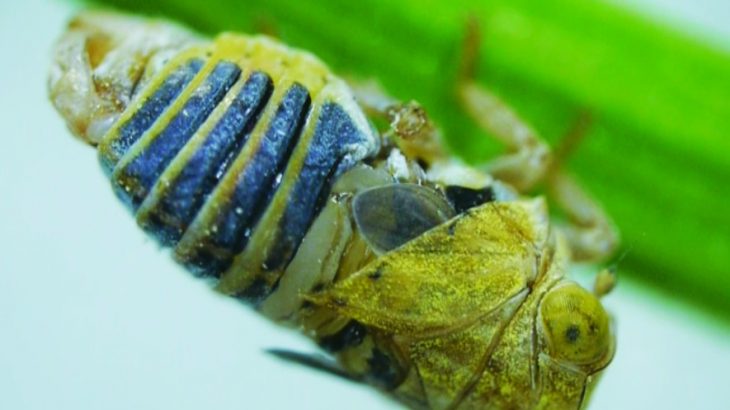 Planthoppers vibrate plants with a “snapping” organ as a mating call

Planthoppers, so named for their quick “hop” reflex that allows them to leap away from danger, are small plant-eating bugs found in most corners of the world.

One unusual trait of the planthopper is the way the bug attracts a mate by sending vibrational calls along the plant stems that they perch upon. The strong vibrations travel along the stems, and both males and females use this unique mating call to signal to one another.

To produce a strong enough vibrational call, the bug needs to expel a large amount of energy and quickly release it.

In a new study, researchers from the University of Oxford discovered the secret behind the planthopper’s quick release of stored energy, a complex organ that quickly snaps open and closed to produce the vibrational calls.

The research was published in the journal PLOS Biology.

With the snapping organ, the bug can release stored energy like a catapult, and the release occurs cyclically in a repetitive pattern.

Leonidas-Romanos Davranoglou, the lead author of the study, was examining 3D images of planthoppers when he discovered the organ.

“I was studying 3D images of planthoppers that I had collected using X-ray imaging in a particle accelerator, trying to understand the evolutionary relationships between different groups,” said Davranoglou. “But as I dissected the bugs in virtual reality on my computer, I immediately realised that I was looking at something entirely new, so decided to investigate further.”

Davranoglou, along with a team of researchers, collected live planthoppers around Athens to see if the snapping organ was found in other species of planthoppers and to understand how the mechanisms worked.

The snapping organ was found in all the specimens collected and was present across different families of the bug.

Next, the researchers created a theoretical model of the organ to help aid in future studies into the planthopper’s unique anatomy.

“These insects include several economically important pest species, including the brown planthopper, which is one of the most serious pests on rice in the developing world,” said Dr. Beth Mortimer, a co-author of the study. “Understanding how these insects signal to each other may help in disrupting their communication channels or detecting their calls. Silent to the ear, the planthoppers have come up with their own novel way to communicate with potential mates.”