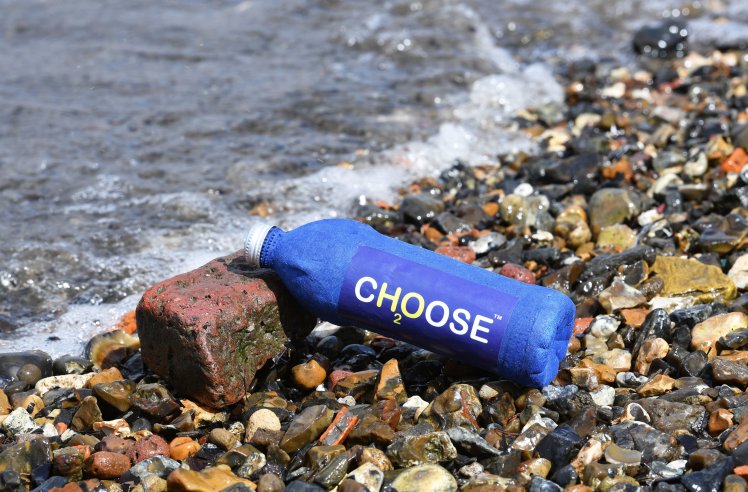 James Longcroft invented the plastic-free bottle after launching a non-profit water bottle company, Choose Water, as a means to provide clean drinking water to countries in Africa two years ago.

Longcroft saw the growing problem with plastic pollution filling up landfills and ending up in the oceans and decided to go plastic-free.

After experimenting with different materials and techniques, Longcroft designed an effective replacement bottle that didn’t use any fossil fuels in the production process.

The paper bottle surrounds a waterproof seal made of entirely sustainably-sourced natural ingredients and can break down in salt-water in just three weeks.

“The outside is made from recycled paper, but the inside had to be waterproof, provide strength so the bottle would retain its structure, and keep the water fresh – just like plastic,” Longcroft told the Scotsman. “We’ve managed to do all that, which is pretty exciting. It’s made with a combination of natural, sustainable materials. I’ve just mixed some stuff together from trees and plants – they’re all natural.”

The bottle costs just a little more to make than the average price of just one plastic single-use bottle. After use, the new bottle starts to break down almost immediately and takes only a few weeks to completely biodegrade.

The steel cap is the only part of the bottle that doesn’t break down quickly but still begins to decompose within a year.

Plastic pollution is increasing and while researchers, engineers, and policymakers are scrambling to find ways to reduce the amount of plastic waste that ends up in landfills and oceans, plastic production is projected to exceed 500 million metric tons by 2050.

Choose Water’s plastic-free bottle could be a major step in reducing plastic pollution and creating new ways to package and sell products that are sustainably sourced.

“Changing an industry will be a massive uphill battle but with the public’s support we will change the way we look at bottled water’,” Longcroft was quoted as saying in the Daily Mail. “We really want to get our bottles on shelves and into people’s hands as soon as possible, if we can stop even one plastic bottle ending up in the environment it will be worth it.”