How the poppy evolved to produce compounds for pain relief • Earth.com 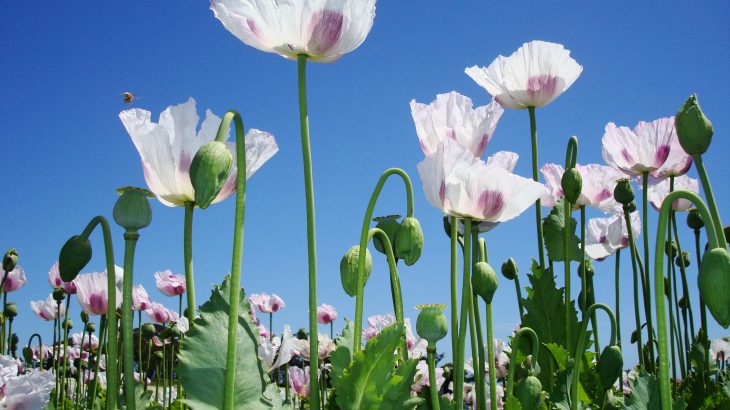 How the poppy evolved to produce compounds for pain relief

Researchers have mapped the genome of the poppy plant which could help make effective pain treatment production easier and widely accessible.

The study, conducted by researchers from the University of York and the Wellcome Sanger Institute, sheds light on the evolution of the opium poppy plant and how it developed the compounds that have become so important to pharmaceutical advancements through the years.

Now, researchers know how and when the poppy plant first developed the genetic pathways that allow for the production of noscapine (used as a cough suppressant), morphine, and codeine (used to alleviate pain) in the plant today.

“Biochemists have been curious for decades about how plants have evolved to become one of the richest sources of chemical diversity on earth,” said Ian Graham, the co-corresponding author of the study. “Using high-quality genome assembly, our study has deciphered how this has happened in opium poppy.”

Researchers are currently working on creating a way to synthetically manufactured noscapine and morphine, but deriving these opiates directly from poppy plants is the cheapest method of production.

The new study, published in the journal Science, could help create ways to maximize poppy plant yields and disease resistance.

“At the same time this research will provide the foundation for the development of molecular plant breeding tools that can be used to ensure there is a reliable and cheap supply of the most effective painkillers available for pain relief and palliative care for societies in not just developed but also developing world countries,” said Graham.

First, the researchers sequenced the poppy genome using a method that allowed for the identification of a cluster of genes that encode enzymes in the production of noscapine and morphine.

Plants can duplicate their genomes which creates the opportunity for some duplicated genes to evolve to do certain tasks like defend against disease or attract pollinators.

The researchers discovered that millions of years ago, the poppy’s ancestral genes came together in the first step towards the production of morphine and codeine,

“A highly repetitive plant genome and the intermingled evolutionary events in the past 100 million years complicated our analysis,”  said Kai Ye, another co-corresponding author of the study. “We utilized complementary cutting-edge genome sequencing technologies with sophisticated mathematical models and analysis methods to investigate the evolutionary history of the opium poppy genome.”

The team was able to identify the ancient creation of the pathways that make morphine production possible today in the poppy plant, and this could help with optimizing poppy plant growth and provide pain relief to areas in need of quality healthcare and medicine.

“It is intriguing that two biosynthetic pathways came to the same genomic region due to a series of duplication, shuffling and fusion structural events, enabling concerted production of novel metabolic compounds,” said Ye.