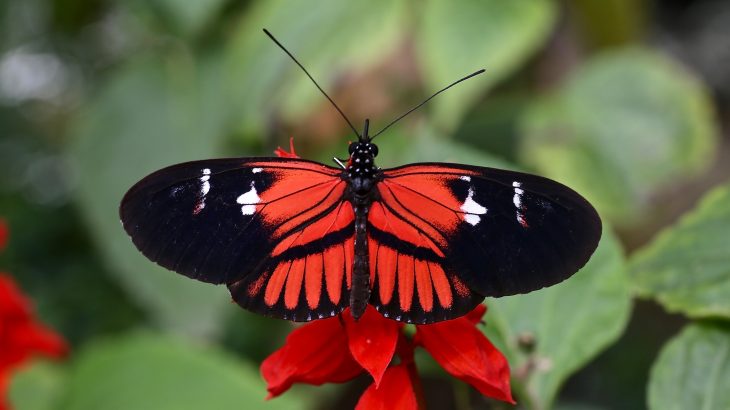 Pretty poison and Müllerian mimicry: Teaming up to avoid predation

“You can hide as cleverly as you like, but in the final analysis mimicry is deception, pure and simple. It doesn’t solve a thing,” says a character in Haruki Murakami’s IQ84.

That might be true for humans, but in the animal world, mimicry has evolved as as essential adaptation in some species. This deception does indeed solve a problem: that of being eaten. Some animals mimic leaves, or rocks, or the substrate upon which they live, obscuring them from predators. Others possess markings that make them resemble predators themselves. Take, for example, the owlish “eyes” on the wings of many insects.

While the camouflaging properties conferred by a resemblance to an inanimate object or a larger, dangerous, animal are obvious, some creatures have developed even more complex forms of mimicry. In Batesian mimicry, non-toxic species have evolved to mirror the aposematic patterns used by poisonous species to advertise their toxicity, thus protecting them in some measure from predators who are wary of such markings. That phenomenon was first noted by Henry Walter Bates in an 1862 paper and was later taken up by Charles Darwin.

Conversely, in Müllerian mimicry, one toxic species evolves to resemble another toxic species. The German scholar Fritz Müller first noted strong similarities between the markings of several species of poisonous Brazilian butterfly in 1878. (He too communicated his findings to Darwin.) While all were toxic to birds and other animals that might think to prey upon them, they appeared to be copying each other in physical appearance. Among the butterflies he observed were those in the subfamily Heliconiinae, still among the most diverse and best studied groups of Müllerian mimics. Müller’s observations have since been borne out in observations of many other species. However, the validity of his original characterization is hotly debated, not least due to the overlapping Batesian characteristics of some putative Müllerian mimicry relationships.

Per Müller’s reasoning, this form of mimicry evolved in less common, but still unpalatable species that shared a habitat with another distasteful, but more common species. This advergence allowed the two species to share the burden of predation by naive young birds and lizards. If, for example, a fledgling bird must sample a novel type of insect several times before learning that it is poisonous, relatively fewer members of each similarly patterned species will be taken. The bird population will have learned that the pattern shared by the less abundant species with the more abundant species signifies an inedible insect by eating some of the model species rather than its mimic and vice versa.

If the less-common species had its own pattern, more would need to be sampled before the bird population wised up to its nasty taste, resulting in the death of more specimens of that butterfly. Though the benefits to the mimic species are greater, predation on the model species is slightly defrayed by the consumption of mimic specimens.

In experiments where the patterns of Heliconius butterflies were obscured before they were released near insectivorous birds, the birds attempted to eat them. The butterflies were of the same species that the birds avoided when its natural coloring was visible. So, too, birds exposed to color morphs of toxic butterflies that did not share their range sampled them with abandon, thereby supporting the notion of predator learning curves as a strong selective force. Such an arrangement strongly discourages the emergence of polymorphism in the mimic species. If it displays a novel pattern rather than the pattern of its model, it is that much more likely to be eaten. 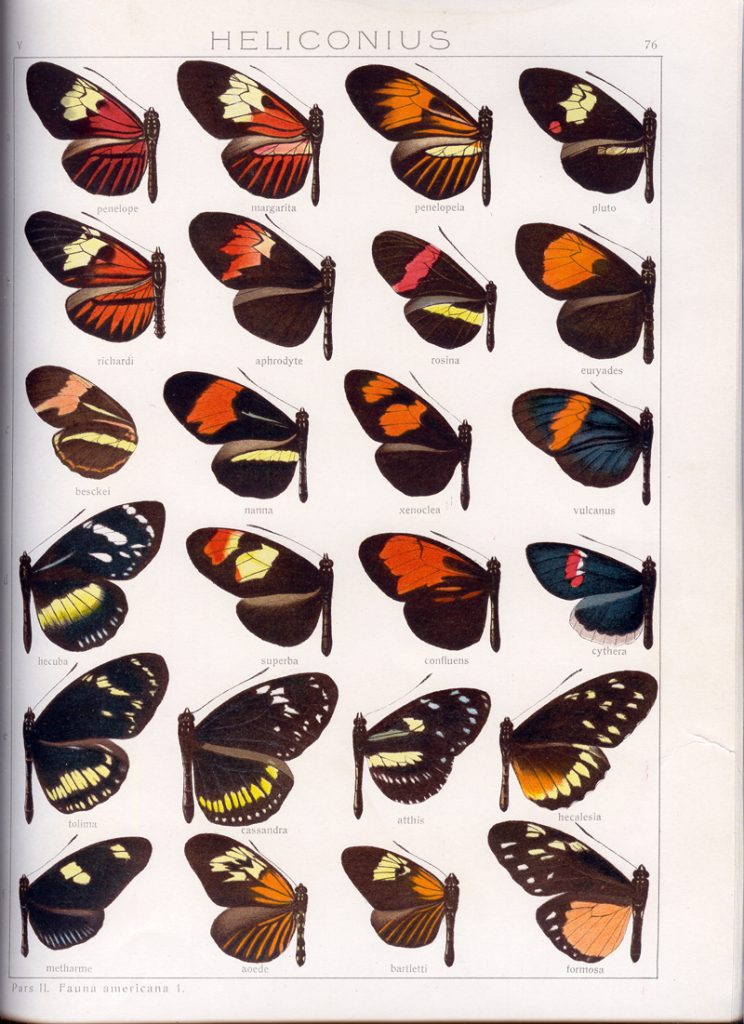 Model species, however, often do display polymorphism and mimics may follow these shifting colors and patterns as they vary across their shared range. This is known as a mimicry ring. The butterflies Heliconius erato and H. melpomene exhibit at least 30 color variations. Each variation is matched by the other species across the expanse of their co-distribution.

If that seems remarkable, consider this: Müllerian mimicry frequently involves more than two species. In the Appalachian Mountains of the United States, a group of seven species of toxic millipede exists in a ring wherein coloration varies from locale to locale and all seven species at a given locale resemble the others. The case of the millipedes is a particularly appealing illustration of Müllerian mimicry because they are all blind, ruling out the role of sexual selection in their coloration, as may be the case in butterflies and other animals. Intriguingly, in some species, one sex may exhibit Müllerian mimicry and the other not, as in the case of Asian pitvipers. This is thought to be due to the differing habits of the sexes, which expose them to different predation risk.

All of this is complicated by the frequent imbalance in toxicity between mimics. Sometimes, the mimicking species is less toxic than the model species, blurring the boundaries between Müllerian and Batesian mimicry. Some have suggested that supposedly Müllerian mimicry relationships in which the mimic is less toxic than the model may actually be Batesian or parasitic.

Because some specimens exhibiting the shared pattern are more palatable, the resemblance may actually result in more predation of the toxic model species by predators who have learned that is sometimes okay to eat specimens exhibiting those patterns. On this basis, it is asserted that true Müllerian mimicry is quite rare, as most such relationships contain species with unequal level of toxicity.

To whit: several species of tiger moths mimic wasps and while the moths are toxic, they hardly possess the stopping power of a wasp sting. Such scenarios have been proposed as a possible selection pressure on certain model species who are evolving to resemble their tastier mimics less closely in order to reduce being mistaken for them. Then, there are the mimics who are in fact more toxic than their models, as in the case of the poison frog Dendrobates imitator. It mimics three different species, all of which are less toxic, depending on which species it occurs alongside. It may have been more evolutionarily parsimonious for D. imitator to resemble its more-common model species as it moved into their territories than to rely on its own aposematic signals to deter predation.

All of this suggests a more intricate schema for the development of shared aposematism than initially conceptualized by Bates and Müller. Further exceptions and modifications to the general rules for these relationships are sure to emerge as more species are studied. What’s sure is this: the sickening sartorial habits of toxic organisms reflect an evolutionary arms race belied by the fantastical colors and patterns that result.