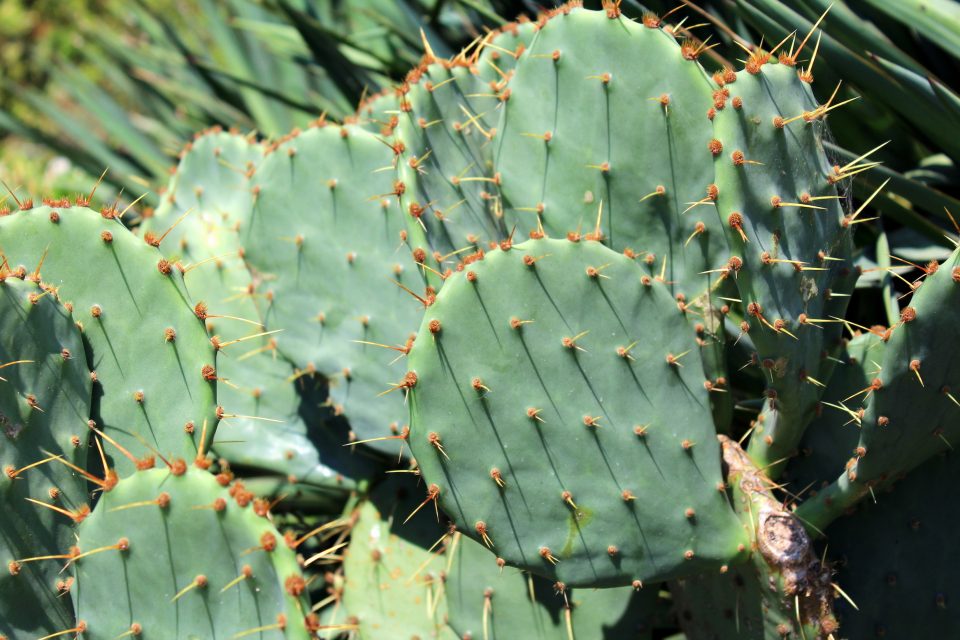 Professor Konrad Rykaczewski of Arizona State University (ASU) studies wettability, or how water interacts with solids, to develop surfaces for industrial applications. After relocating to the Sonora Desert six years ago, Professor Rykaczewski sprayed the plants in his front yard with water to investigate how they interacted with the droplets.

“It was the first time I’d lived in a desert, and I was fascinated by the flora and fauna,” said Professor Rykaczewski. “What I noticed about prickly pear cacti is that the new pads are superhydrophobic, but the ones a season older right below them are superhydrophilic. I wondered why.”

With a seed grant from ASU’s Biomimicry Center, Professor Rykaczewski and a team of students began experimenting in the lab to characterize the microscopic 3D epidermal structure of prickly pears at dry and wet times of the year.

The study revealed that new cactus pads have a continuous waxy, hydrophobic surface, while the older pads are covered with a network of microcracks. Kenneth Manning, a doctoral student on the project who led the experimental work, explained that these microscopic cracks “go down all the way through the wax to the cell wall,” which is hydrophilic.

Using high-speed video, the researchers observed the water droplets bouncing off of the young cactus pads. Among the older pads, however, the microcracks exposed the inner hydrophilic surface which caused water droplets to hit and stick. “The skin is acting as a smart membrane,” said Manning. “As cacti dry out the cracks close, helping to preserve water.”

The findings of the study are now being used to inform Manning’s latest research project in which he is developing a smart material for hazmat suits. The pores of the material will close in the presence of dangerous chemicals. Otherwise, the pores will remain open to allow for vapor and heat transfer out of the hazmat suit, which is a limitation of hazmat suits that are currently in use.

The suits will mimic the smart skins of prickly pear cactuses. “It’s the same sort of change in the surface morphology,” said Manning.

The research will be presented at the American Physical Society‘s Division of Fluid Dynamics 71st Annual Meeting in Atlanta, Georgia.