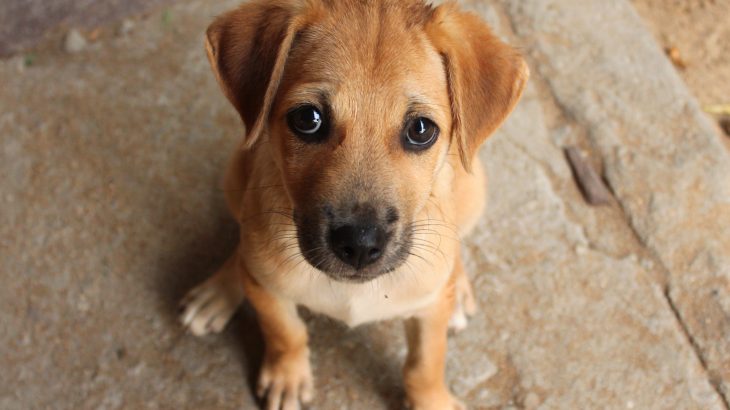 Dogs evolved their ‘puppy dog eyes’ to appeal to humans

The term “puppy dog eyes” isn’t just an expression, as a new study has found that dogs evolved specific muscles around their eyes that allow them to make cute and human-life facial expressions.

It’s an evolutionary adaptation 33,000 years in the making and likely developed as a result of domestication as dogs split from their wild wolf counterparts.

The quizzical, eyebrow-raising expressions aren’t just adorable, but also serve as a useful means of communication, triggering a nurturing response from humans.

Researchers from the University of Portsmouth conducted the first detailed analysis of the anatomy and behavior of wolves compared to dogs. Although facial muscles between the two species were mostly similar, the researchers discovered one key difference in domestic dogs.

A small muscle in the inner eyebrow allows dogs to raise their eyebrows, making their eyes seem larger and more appealing to humans. The movement, which the researchers dubbed the Action Unit 101, makes dogs seem more infantile.

Wolves do not have this capability.

“This movement makes a dogs’ eyes appear larger, giving them a childlike appearance. It could also mimic the facial movement humans make when they’re sad,” said Professor Bridget Waller, a co-researcher for the study. “Our findings show how important faces can be in capturing our attention, and how powerful facial expression can be in social interaction.”

The researchers say that the muscles evolved relatively quickly and dogs are the only example of an animal whose facial expression changed in response to domestication.

“The findings suggest that expressive eyebrows in dogs may be a result of humans unconscious preferences that influenced selection during domestication. When dogs make the movement, it seems to elicit a strong desire in humans to look after them,” said lead researcher Dr. Juliane Kaminski. “This would give dogs, that move their eyebrows more, a selection advantage over others and reinforce the ‘puppy dog eyes’ trait for future generations.”

Siberian huskies were the only dogs that did not have the muscle movement, which could be because huskies are a much older breed of pack dog.

The results of the study were published in the journal Proceedings of the National Academy of Sciences.