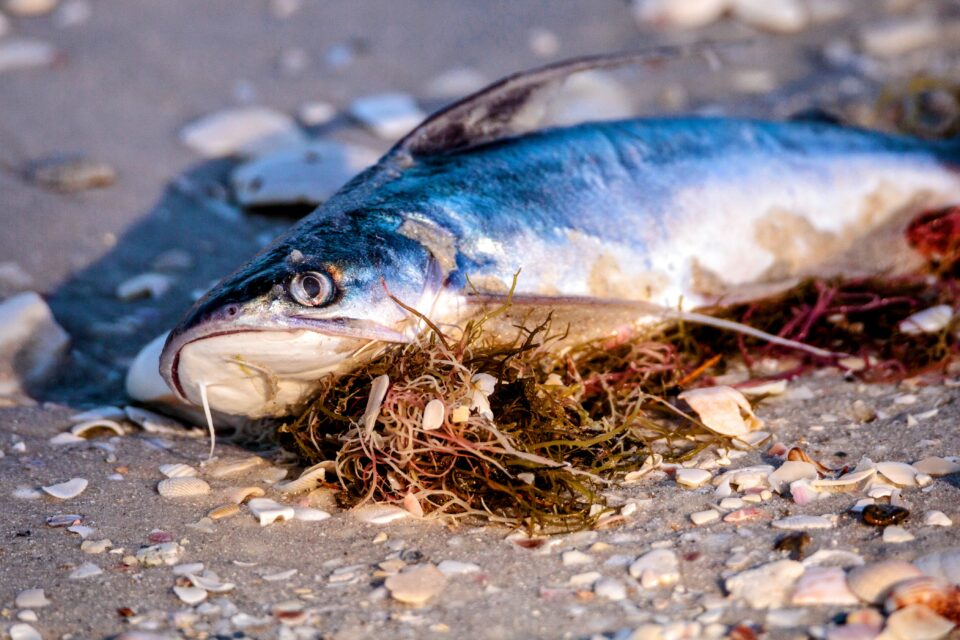 Red tides are gradually becoming an annual occurrence off the west coast of Florida. They are caused by massive blooms of the algae species Karenia brevis, which are partly fueled by the presence of excess nutrients in the ocean. These algal blooms turn the ocean surface red and produce a large variety of toxins that are harmful to marine animals, seabirds, and even humans. The presence of these toxins can lead not only to localized fish kills, but also to large-scale massive mortalities to marine life.

According to a new study led by the University of Miami, these problems are quite frequently compounded by the emergence of low-oxygen regions known as “dead zones” or “hypoxic areas,” which occur when red tides begin in early summer and continue into the fall.

“These events are so disruptive they are being incorporated in population assessments of some grouper species for use in fishery management decisions. During the 2005 red tide that also had hypoxia, it was estimated that about 30 percent of the red grouper population was killed,” said study lead author Brendan Turley, an ecosystem oceanographer at the University of Miami. “There are also concerns that the conditions favorable for combined red tide and hypoxia events will increase with climate change projections into the future.”

In order to determine the frequency of hypoxia events and their association with red tides, Dr. Turley and his colleagues examined nearly 20 years of oceanographic data, which included temperature, salinity, and dissolved oxygen from the surface to the seafloor across the West Florida Shelf. They found that hypoxia events emerged in five of the 16 years examined. In 2005, 2014, and 2018, these events occurred simultaneously with extreme red tides.

The scientists now aim to collaborate with commercial fishermen in Southwest Florida to monitor the occurrence of red tide blooms and hypoxic events and to better understand the relationship between these harmful processes. Further research is needed to clarify whether there is a causal linkage between the two, and to assess the impact of climate change on their occurrence.

The study is published in the journal Harmful Algae.