Resilient coral reefs moving north can be guarded against one additional threat • Earth.com 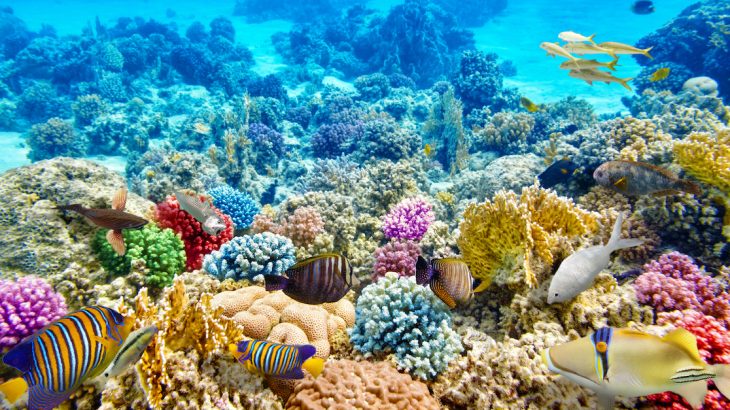 Coral reef ecosystems are one of the most stunning and biodiverse places on Earth. These reefs take up less than 1% of the ocean floor yet harbor more than 25% of all life in the ocean. The basis of all this life is of course coral, the animal that builds the physical structure that creates reefs.

Coral polyps are actually tiny, soft creatures that are related to sea anemones and look a bit like them as well. These soft animals build incredible structures that house entire colonies of individual corals. Hard corals are made of calcium carbonate, also known as limestone. The hard reef structures are fantastic homes for algae that give the reefs their bright colors. The soft corals reap food from the photosynthetic algae in exchange for their reef homes. The reefs also provide shelter and food for fish, octopus, crustaceans and the whole stunning marine jungle that makes up a reef ecosystem.

When corals start to decline, the whole system crumbles and the beauty and life is lost. Research has shown that ocean temperatures just two degrees above normal for a few weeks drives the algae out of the reef, prompting the unraveling of the whole system.

For a while, the diagnosis for Earth’s coral reef ecosystems has been bleak. The reefs have been bleaching and dying off due mainly to warming waters, part of a global warming trend that is very unlikely to change soon.

But there does seem to be some good news for coral. First, it seems that the reason for global coral die off isn’t as simple as many people think. Climate change may play a role but it’s not the only factor involved.

Research published earlier this year looks at coral decline over thirty years at Looe Key, Florida. No one can question the decline of the coral at Looe Key. In 1984, coral covered 33% of the sanctuary preservation area. By 2014, the coral covering those protected marine areas at the tip of the Florida Keys was only 5%.

Corals the world over are dying off and the oceans are warming. In 2016, it was reported that 30% of the Great Barrier Reef was bleached to death and the amount of bleached reef only continues to rise. There is good evidence that warming oceans are to blame for the die off of reef but the study of Looe Key’s corals showed that the situation is complicated.

Throughout the thirty year study, the waters surrounding Looe Key’s reefs exceeded 30.5 °C, the temperature thought to be a “bleaching threshold”. Interestingly, each time the temperatures rose beyond this threshold, massive bleaching didn’t occur. Instead, large bleaching events occurred only when there was also intense run-off from the Everglades. The runoff carried pollutants, including nitrogen known to cause algal blooms.

It seems that the two factors together weaken coral and cause a bleaching process. This is potentially good news because it’s easier to control pollution run-off near reef areas than it is to reverse climate change. Still, with continually increasing temperatures, corals may still continue to die off even with greater pollution control.

Many terrestrial environments face similar problems. Some plants have been dying off within their native ranges. Interestingly, some plants have been slowly migrating northward or up in elevation, surviving in places that were once too cold but now meet environmental requirements. Plants are sometimes limited by how far they’re capable of moving in response to climate change. A perfect example is that of the Hawaiian Silversword, a plant that seems to be at the top and coolest environment it can reach and is starting to show signs of decline. Corals and the reef systems they support are a reflection of these terrestrial ecosystems and the problems they also face from climate change.

A new study on coral suggests that reefs may be responding to climate change in a way similar to how plants can easily colonize cooler, more compatible environments as their old habitats heat up. On a global scale, the study shows an 82% of coral recruitment from 1974 to 2012 and a decrease in coral densities in equatorial regions.

The upside is the study also found an increase in coral densities in subtropical regions. 78% or more increases in coral density were shown at 20 degrees latitude. It seems that corals are moving towards the poles. Even as corals decline overall, the fact that they have the potential to move northward shows some potential for their long term survival. This of course could lead to dramatically different world oceans in the future.

Marine organisms and ecosystems are constantly on the move just like their terrestrial counterparts. Recently, a couple sailing to Fiji encountered an enormous raft of porous floating rocks. The raft of pumice was created by the eruption of an underwater volcano. Scientists predict that by the time the pumice raft encounters Australia’s Great Barrier Reef, thousands of marine animals will have colonized the cracks and crevices of the floating rocks.

This mass of floating life may help revitalize the declining reef system for a while, but it’s hard to imagine it turning the tide for the Great Barrier Reef while it faces continuing problems. The pumice raft represents hope of another sort, hope that when the reefs alive to day bleach and die, the life that they supported can move as well.

The growth of new reef ecosystems closer toward the pole is a sad realization of the loss we suffer with the death of their equatorial counterparts. The growth of the reef systems further from the equator also hold out hope for new reef systems in different parts of the world, a way for life in the oceans to continue on the best it can. Other research shows that there is potential for some coral adaptation to warmer waters by potentially replacing algae with more heat tolerant varieties.

While we hope for corals to adapt or at least rebuild reefs elsewhere, it’s helpful to know that our run-off pollution can hurt them as much as warming waters, something else to tackle along with climate change.