Restoring wildlife habitats may prevent the next pandemic • Earth.com 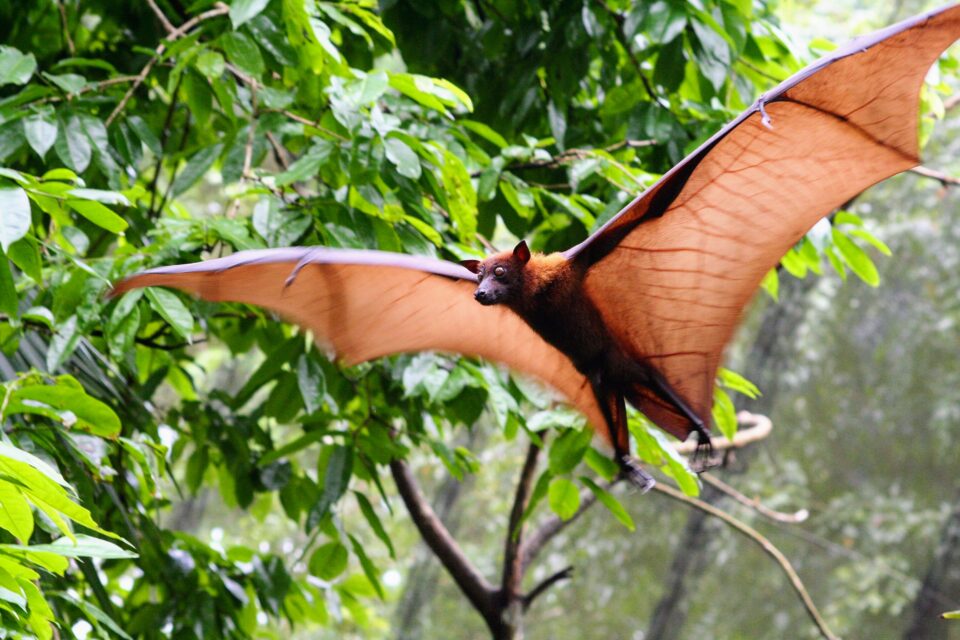 Restoring wildlife habitats may prevent the next pandemic

The SARS-CoV-2 pandemic has made people more aware of the dangers of close contact with wild animals. Viruses such as SARS-CoV-2, SARS-CoV-1, Nipah, and Hendra have all been shown to originate in bat populations and to spill over into humans, sometimes via intermediate hosts. Previous studies have linked spillover with changes in land use that affect bat populations, but there is little explicit data on the connections between spillovers, bat ecology and behavior, and viral dynamics.

A new review, published in the journal Nature, combines multiple datasets on bat behavior, distributions, reproduction and food availability, along with records of climate, habitat loss and environmental conditions over 25 years. The data is used in the development of a model, along with information on the incidence of Hendra virus outbreaks. This allowed the experts to investigate which factors are associated with the spillover of Hendra from fruit bats to horses, and then to people, in subtropical Australia.

Australian flying foxes (Pteropus spp., also known as fruit bats) are reservoir hosts of Hendra. This virus does not cause discernible disease in bats, but has a fatality rate of 75 percent in horses (the intermediate host), and 57 percent in humans. The bats forage naturally on nectar and fruit, and are particularly dependent on indigenous flowering trees for food in winter. Infected bats that feed or roost in horse paddocks pass viral particles in their droppings, and horses may contact these while grazing. Humans are exposed via infected horses and do not pass the virus between each other.

The data sets used for developing the computer models (called Bayesian network models) were collected between 1996 and 2020. They contained information on the locations and sizes of fruit bat populations in subtropical Australia, the landscapes where they foraged, climate and El Niño events, years when there were food shortages, bat reproductive rates, records of bat intakes into rehabilitation facilities, habitat loss in forests that provide nectar in winter, and years when flowering in existing winter forests occurred.

The results of the analysis indicated two major factors driving spillover of Hendra: habitat loss pushing animals into agricultural areas, and climate-induced food shortages. In years subsequent to an El Niño event (high temperatures in the Pacific Ocean), buds of trees that bats depend on for nectar failed to produce flowers during winter, leading to a food shortage. This led to bat populations splitting up and moving into agricultural or urban areas in search of food.

But it is not only El Niño events that have this effect. Human destruction of forest habitat for farmland and urban development has left few forests that produce nectar for bats in winter, resulting in their need to establish permanent populations in agricultural and urban areas instead, where weed species and fig, mango and shade trees offer shelter and food that is reliable, albeit less nutritious.

A second investigation, on the links between ecological conditions and Hendra virus in fruit bats, has been published in Ecology Letters. This study used data from the Nature study to show that, when bats are stressed due to food shortages, there are more Hendra virus particles present in their droppings. The researchers propose that the stressed bats shed more virus because they need to conserve energy and protect their immune systems from excess work.

Furthermore, the bats that moved to unnatural winter habitats, such as agricultural areas, shed more virus than bats in traditional winter habitats. These findings indicate that when bats experience food shortages, despite living in farmlands, their droppings contain more viral particles and have an increased likelihood of causing periodic spillovers of disease. Historically, most spillover episodes have occurred in Australia during the winter months.

The researchers found that, in years when food was abundant in natural habitats during the winter months, bats emptied out of agricultural areas and away from human communities, to feed in native forests. In particular, when the remaining stands of eucalyptus trees bloomed in winter, the bats moved to make use of these flowering events, and pathogen spillover ceased completely.

“We put these data into the network models and found that we could predict spillover clusters based on climate, the availability of food, and the location of bats,” said Raina Plowright, professor in the Department of Public and Ecosystem Health at Cornell University, and senior author of both studies. “We show that when remaining habitat produces food, spillover stops, and therefore a sustainable way to stop these events could be to preserve and restore critical habitat.”

The researchers noted that, while fruit bats historically formed large roosts of over 100 000 individuals that moved around nomadically to utilize flowering events, this has changed since around 2003. There has been a five-fold increase in the number of smaller roosts, particularly in agricultural and urban areas, and these are more or less permanent. Bats are far less likely today to return in large numbers to their shrinking native habitats.

It is clear that winter flowering pulses are very important for bat survival and health, and that these events are becoming increasingly rare. In 2020, the researchers’ model predicted a high likelihood of viral spillover but, following a significant winter flower pulse, no spillover occurred. Instead, hundreds of thousands of bats left agricultural and urban habitats and headed to the patches of forest where flowering took place, thus decreasing the contact between bats and horses. The remaining patches of suitable forest trees are clearly critical in reducing the risk of zoonotic spillover.

“Right now, the world is focused on how we can stop the next pandemic,” said Plowright. “Unfortunately, preserving or restoring nature is rarely part of the discussion. We’re hoping that this paper will bring prevention and nature-based solutions to the forefront of the conversation.”