Right whales have been recorded singing for the first time • Earth.com 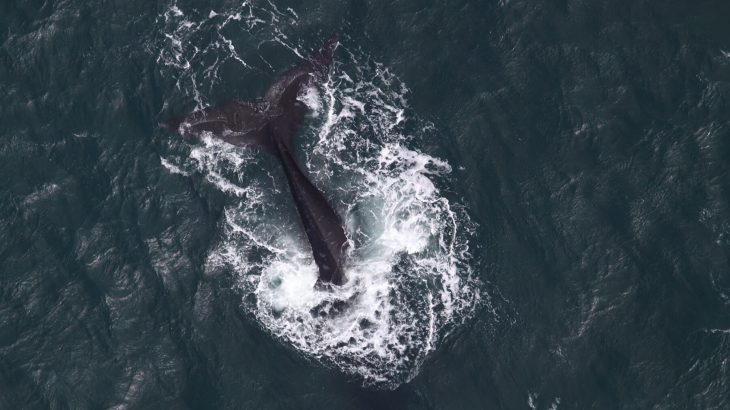 Right whales have been recorded singing for the first time

Right whales have large, distinctive heads that can help identify them and also hold baleen to filter tiny food such as plankton from the ocean. They are impressive animals, weighing as much as 100 tons and living at least 70 year life spans. The only way these whales are obscured is by living in remote, wild and open parts of the ocean much more massive than even they are. Still, whales have played an important role in culture and unfortunately have tangled in human economics.

The right whale in particular has a long relationship with humans, especially from being hunted. Indeed, even the name ‘right whale’ was given to the unfortunate mammal by whalers who dubbed it the ‘right whale’ to kill, according to National Geographic. The whales were viable prey for whalers because they swim slowly and float after death.

Despite international law, the USSR and Russia hunted North Pacific right whales from 1965 to 1999, a time when only 82 of the whale sightings were reported in the eastern portion of the North Pacific. Due largely to whaling, right whales have been on the Endangered Species List since 1970, according to NOAA. Historically, the whales were found throughout oceans from temperate waters to the subpolar Bering Sea. Today, with a population much reduced, knowing the full extent of the North Pacific right whale’s range is complicated by the smaller chance of seeing the whale anywhere.

Including the North Pacific right whale, there are three right whale species, left in minuscule numbers from the damage of whaling.

Populations of right whales grow slowly, National Geographic reports, because the whales are sexually mature only after 10 years and females give birth to a single calf after a year of pregnancy. However, NOAA notes that there are no accurate estimations of the population or population trends. It’s part of the complication of studying a whale that lives in remote, cold waters near Alaska, as it makes research challenging. Despite these challenges, the North Pacific right whale and NOAA researchers recently made big news.

Interestingly, all known singing whales are male. This points to possibilities but no one is exactly sure the purpose of singing in whales in general and especially not in the North Pacific right whales. There is no evidence that the other right whales sing, but this recent discovery makes it seem more likely.

This is especially true for research carried out in the large, remote and challenging Bering Sea. For the North Pacific right whales in the singing population, there is about a 2 to 1 ratio of males to females. With such odds in such a small population, finding mates must be very challenging for the males. It seems likely that the singing has to do with an attempt to find mates in the vast, lonely ocean but it’s not entirely certain.

Whale songs in general have been reported since the beginning of whaling, so it’s surprising to discover a new species singing this recently. This new discovery of such a large animal, with such a long history of interactions with humans, highlights how large the world is and how small human knowledge of it is. This is true most in the oceans, the environment most foreign to us and most vast – an open place devoid of human habitation where we only visit in our boats.

Without more time spent observing North Pacific right whales, the best that can be done is educated speculation based on what we know about other whale songs. As a rule, whale songs change over time throughout the singing season, according to a report in Cell. Different populations of whales have different songs, which also change year to year. Interestingly, a group of whales encountering another group will sometimes adopt the other groups song.

It’s hard to say how much of these generalizations is true for right whales and we may never know. It’s comforting to learn that there are secret things animals have shared among themselves without the knowledge or interference of humans. It’s exciting to catch a new glimpse at the inner life of a different creature but it’s good to acknowledge the awe of mystery as well. Nowhere on Earth is as mysterious as our oceans.