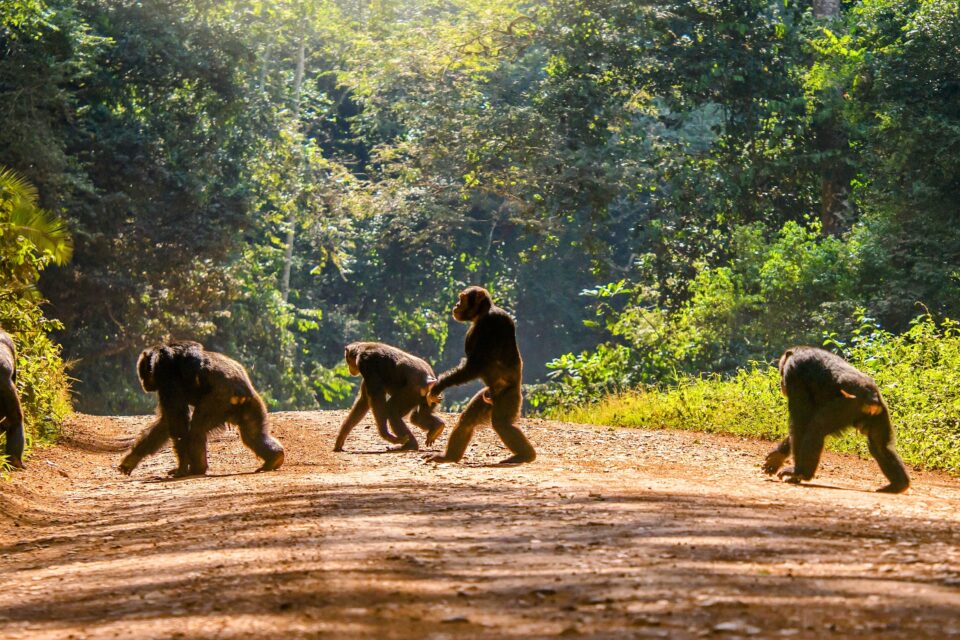 It has been well established that roads generally have a negative impact on biodiversity and many species of wildlife. A new study from an international team of scientists published in the journal Conservation Letters looks more closely at the impact of roads on chimpanzees.

“Western chimpanzees were once widespread across West Africa, but the species has declined by 80 percent in the last 20 years and is currently classified as critically endangered,” said Balint Andrasi, who led the research as a masters student at the University of Exeter.

The study was a hard one to accomplish because less than 5 percent of the chimpanzees’ range is outside of “road-effect zones,” explained Adrasi,

“The human population in West Africa is growing rapidly, and chimpanzees face mounting pressure from the expansion of settlements and infrastructure.”

“Just 4.3 percent of their range remains unaffected by roads, so they don’t have anywhere else to go, and in any case migration over long distances is uncommon. Western chimpanzees are highly territorial, so attempting to move could lead to conflict with neighbouring groups.”

In the end, the study concluded that roads have a far-reaching impact on the great apes. The impacts of large, major roads extend for an average of 10.7 miles, while minor roads adversely affect about 3.4 miles of surrounding habitat. Roads bring disruptive human activities with them, and also fragment and redirect chimpanzee populations.

“Our great ape cousins face so many threats, from habitat change to hunting to disease,” said Dr. Kimberly Hockings of Exeter. “The impact of infrastructure development is much larger than I ever anticipated and is truly worrying.”

Dr. Hockings hopes that the research is a step in the right direction for chimpanzees,

“We hope these findings will ensure the true costs of infrastructure development on the critically endangered western chimpanzee are fully considered by policy makers…we can’t give up. We must do everything we can to ensure their continued survival. I can’t imagine a world where humans are the only great apes left.”

The study is published in the journal Conservation Letters.