New robotic exosuit can switch between walking and running • Earth.com 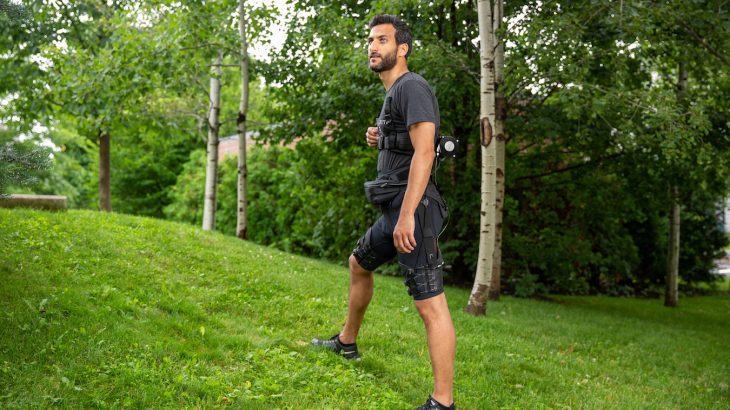 New robotic exosuit can switch between walking and running

You might not think there’s a big difference between walking and running besides speed. But when working to develop robotic devices to help assist in these movements, it is challenging to create one that can seamlessly switch between gaits.

A new exosuit developed by researchers from Harvard and the University of Nebraska Omaha can help with both walking and running, and it’s the first untethered portable device of its kind.

When we walk and run, although our gaits start with an extension of the hip, the biomechanics of the two paces are drastically different.

For this study, published in the journal Science, the researchers built on previous multi-joint extension exosuits designed to help with mobility and were able to create a new hip-assisting suit that is less complex than previous models and light-weight.

When worn, a cable actuation system applies force between a waist belt and thigh wraps.

The researchers had to find a way for the suit to identify a walking and running gait and distinguish between the two.

To help overcome this challenge, the researchers used biomechanic comparisons between walking and running to create an algorithm. While walking, a person’s center of mass moves upward when the heel strikes the ground, but in running the movement of the center is mass is opposite.

“We took advantage of these biomechanical insights to develop our biologically inspired gait classification algorithm that can robustly and reliably detect a transition from one gait to the other by monitoring the acceleration of an individual’s center of mass with sensors that are attached to the body,” said Philippe Malcolm, Ph.D., a co-corresponding author of the study.

Treadmill tests showed that the exosuit lowered metabolic walking rates for wearers by 9.3 percent and running rates by four percent.

“We were excited to see that the device also performed well during uphill walking, at different running speeds and during overground testing outside, which showed the versatility of the system,” said Conor Walsh, Ph.D., the leader of the study. “While the metabolic reductions we found are modest, our study demonstrates that it is possible to have a portable wearable robot assist more than just a single activity, helping to pave the way for these systems to become ubiquitous in our lives.”