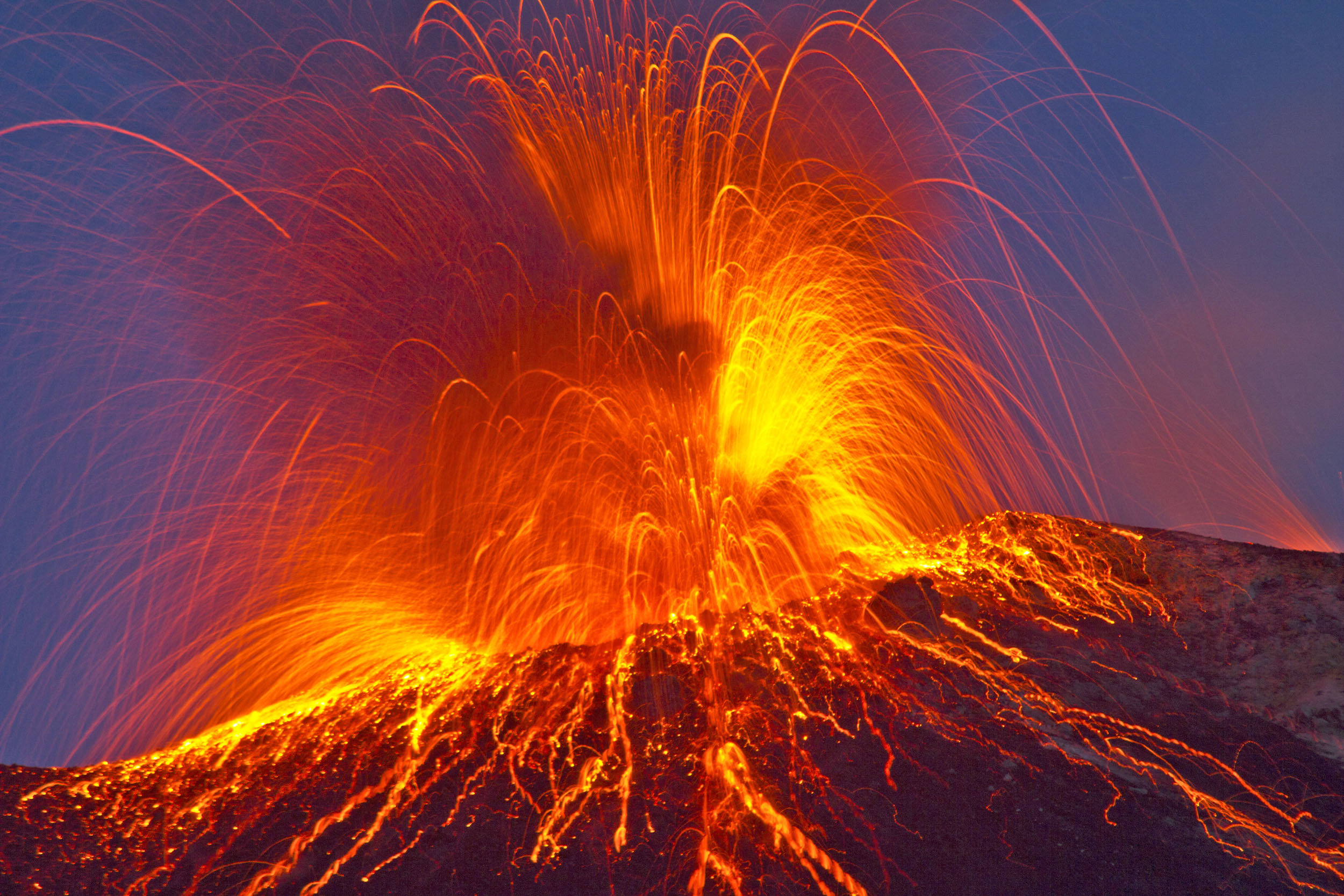 On average, 40 volcanoes on land erupt into the atmosphere each month, while scores of others on the seafloor erupt into the ocean. A new time-lapse animation uniting volcanoes, earthquakes, and gaseous emissions reveals unforgettably the large, rigid plates that make the outermost shell of Earth and suggests the immense heat and energy beneath them seeking to escape.

With one click, visitors can see the last 50 years of “Eruptions, Earthquakes, and Emissions.” Called E3, the app allows the viewer to select and learn about individual eruptions, emissions, and earthquakes as well as their collective impact. Visualizing these huge global datasets together for the first time, users can speed or slow or stop the passage of time. They can observe flat maps or globes, and watch gas clouds circle the planet. Data from Smithsonian’s Global Volcanism Program and the United States Geological Survey (USGS) feed into the app, and the datasets are available for free download. The app will update continuously, accumulating new events and additional historical information as it becomes available.

“Have you had a ‘eureka!’ moment where you suddenly see order in what appeared chaotic? This app abounds in such moments,” said Elizabeth Cottrell, head of the Global Volcanism Program of the Smithsonian Institution in Washington, DC. “As geologic events accumulate over time, Earth’s tectonic plates appear before your eyes. What took geologists more than 200 years to learn, a viewer learns in seconds. We wanted to share the excitement with as big an audience as possible. This is the first time we’re able to present these datasets together for the public.”

She added, “This app is interesting not only for educators and the public, but also will help scientists understand global eruption patterns and linkages between Earth’s inner workings and the air we breathe.”

A team of experts developed the app with support from the Smithsonian Institution and the Deep Carbon Observatory, an international multidisciplinary research program exploring the quantities, movements, forms, and origins of carbon deep inside Earth. Deep Carbon Observatory scientists are studying volcanic emissions as part of this mission, and will more than triple the number of permanent volcano gas monitoring stations from 2012-2019.

Hundreds of millions of people around the world live on the flanks of active volcanoes, and eruptions can cause massive economic damage even when few people live nearby. In 2010, Eyafjallajökull erupted in Iceland, spewing massive ash clouds, disrupting air travel for millions of people and costing the airline industry nearly USD 2 billion. Better anticipation of eruptions could lower the human and economic toll of these natural phenomena.

“We are deploying automated monitoring stations at volcanoes around the world to measure the gases they emit,” said Tobias Fischer, a volcanologist at the University of New Mexico, USA, and leader of DECADE. “We measure carbon dioxide, sulfur dioxide, and water vapor (steam), the major gases emitted by all volcanoes on the planet. In the hours before an eruption, we see consistent changes in the amount of carbon dioxide emitted relative to sulfur dioxide. Keeping an eye on the ratios globally via satellites and on-site monitoring helps us learn the precursors of volcanic eruptions. Monitoring these volcanic gas variations also helps us come up with a more accurate estimate of total volcanic carbon dioxide emissions on Earth – a major goal of DCO.”

“Our goal of tripling the number of volcanoes monitored around the world by 2019 is no small task,” added Fischer. “Installing instruments on top of volcanoes is dangerous work in extremely hard-to-reach places.”

“Sometimes our monitoring stations become victims of eruptions they are trying to measure, as happened recently on Villarrica volcano in Chile. At least our instruments recorded gas composition changes right up until the eruption destroyed them,” Fischer noted.

By 2019, DECADE scientists hope to have gas monitoring stations on 15 of the world’s 150 most active volcanoes. This will add to the eight stations currently operated by other entities such as the USGS and the University of Palermo (Italy). Data collected at these monitoring stations are feeding a new database of volcanic carbon emissions, making potentially life-saving information available to many more scientists around the world.

Maarten de Moor and his team at the National University in Costa Rica, for example, using DECADE monitoring stations, have measured gas emissions at Póas and Turrialba volcanoes in Costa Rica over several years. De Moor and colleagues have observed remarkable changes in gas compositions before eruptions at these volcanoes, both of which have a huge impact on local society. Turrialba, for example, deposited ash on the capital city of San José over the last few weeks, affecting about 3 million people and closing the international airport.

“We’re getting more and more confident that changes in the carbon to sulfur ratio precede eruptions,” said de Moor. “Potentially, we can now see an eruption coming just by looking at gas emissions. What is truly fascinating is how dynamic these volcanoes are in their degassing and eruptive behavior. To understand the big picture of Earth degassing, we also need to understand the processes driving temporal variations in volcanic emissions.”

Historically, volcanologists have measured emissions of smelly sulfur dioxide much more easily than colorless, odorless carbon dioxide emissions. But DCO scientists at Centre National de la Recherche Scientifique (CNRS) and Université de Lorraine in France are designing new geochemical tools to detect and monitor large-scale emissions of volcanic carbon dioxide. Tools include a new high-precision method for measuring excess airborne amounts of a rare form of helium found in magma, high-temperature fluids from below Earth’s crust that come out of volcanoes in the form of lava and gases.

“Our helium data suggest that even when they are not erupting, volcanoes constantly release carbon dioxide and other gases through the crust, from magma chambers deep underground,” said Bernard Marty, leader of the CNRS group. “We see low level release of carbon dioxide over large areas surrounding Mt. Etna volcano in Sicily and Erta Ale volcano in Afar, Ethiopia, which tells us this might be happening at sites around the world.”

Eyes in space add to the toolkit

To assess volcanic activity and gas release on a global scale, DCO researchers at the University of Cambridge, UK, are taking yet another approach; measuring volcanic gases from space using satellites.

“While water vapor and carbon dioxide are much more abundant volcanic gases, sulfur dioxide is easier to measure because Earth’s atmosphere contains very little sulfur dioxide,” said Marie Edmonds, co-Chair of DCO’s Reservoirs and Fluxes Science Community. “With satellites, we have been able to measure sulfur dioxide emissions for years and the technology keeps getting better. An exciting new aspect of DCO’s research combines the satellite data with ground-based measurements of carbon to sulfur ratios provided by DECADE. This powerful combination allows us to better define global volcanic emissions, or degassing, of carbon dioxide.”

“DECADE’s volcano-based instruments make it possible for us to ground-truth our satellite observations and obtain much more frequent measurements” added Edmonds. “Eventually we hope we’ll get as accurate measurements from space as we do from the ground. When this happens, we can monitor volcanoes in remote parts of the world for a fraction of the cost and without risking scientists’ lives.” As the data accumulate, they too will stream into and through the E3 app.

The Deep Carbon Observatory (DCO) is an international network of nearly 900 multi-disciplinary scientists committed to investigating the quantities, movements, forms, and origins of carbon in deep Earth. The Alfred P. Sloan Foundation (New York) provides core support for the DCO.

The National Museum of Natural History is part of the Smithsonian Institution, the world’s preeminent museum and research complex. The Museum is dedicated to inspiring curiosity, discovery, and learning about the natural world through its unparalleled research, collections, exhibitions, and education outreach programs.

The mission of the Smithsonian’s Global Volcanism Program (GVP) is to document, understand, and disseminate information about global volcanic activity through four core functions: reporting, archiving, research, and outreach. The data systems that lie at the program’s core have been in development since 1968 when GVP began documenting the eruptive histories of volcanoes.