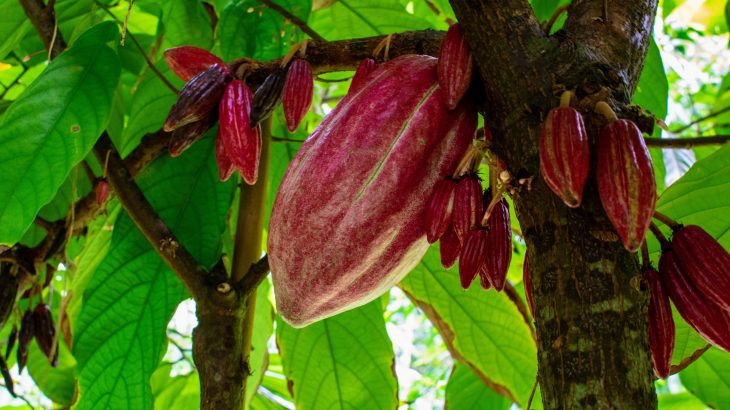 A new study from Penn State has produced a potential solution to the issue of black pod disease among cacao trees. The researchers found high levels of the antimicrobial compound clovamide in the leaves of a disease-resistant strain of cacao, which could ultimately help in breeding trees with immunity to black pod rot.

The discovery is significant because this fungal disease is a serious problem in all areas of the world where cacao is grown, explained study co-author Professor Mark Guiltinan.

“This is the first time that clovamide has been implicated in cacao resistance to pathogens, and the innovative method we used to measure the compound in the leaves could have a major impact in the quest to develop highly productive, disease-resistant varieties of cacao,” said Professor Guiltinan. “But these results may have consequences for advancing disease resistance in other plant species, as well.”

The study was focused on a cacao variety known as Scavina 6, which is tolerant of the fungus that causes black pod rot. The leaves of this particular cacao strain were found to accumulate high levels of clovamide and several other metabolites that are known to be involved in responses to stress.

Compared to a susceptible cacao strain, Imperial College Selection 1, concentrations of clovamide were up to 58 times higher than in Scavina 6 leaf extracts.

“These results pointed to clovamide as a potential contributor to disease resistance, and laboratory tests supported this hunch,” said Professor Guiltinan.

Lab tests confirmed that the compound inhibits the growth of three pathogens of cacao in the Phytophthora genus. In one experiment, clovamide inhibited the activity of the enzymes proteinase and pectinase, which are known to break down plant cell walls.

According to the researchers, their study indicates that clovamide prevents the pathogen’s ability to break down cell walls while killing and digesting plant tissue.

Study lead author Ben Knollenberg said the findings promise to enhance plant-breeding efforts to develop highly productive varieties of cacao that can withstand the onset of black pod rot. He explained that the method used in this study to measure clovamide levels in leaves could greatly streamline and condense the breeding process.

“The Scavina 6 strain has been utilized as a parent in cacao-breeding programs for decades, but it hasn’t been clear why it’s resistant to black pod rot, which makes breeding for resistance difficult,” said Knollenberg.

“Breeders cross Scavina 6 with higher-yielding varieties, for example, and they get a bunch of seeds or offspring, which may or may not have inherited the disease resistance. Evaluating the disease resistance of this new generation of trees requires years of growth and measurements in field trials, which requires land, labor and money.”

If breeders can screen for leaf clovamide content when the trees are just seedlings in the greenhouse, they can eliminate trees that lack the trait before transplanting the seedlings to the field, said Knollenberg.

“We think this will accelerate breeding and make it more efficient so that breeders can develop resistant varieties more quickly. For example, instead of growing 1,000 trees to evaluate resistance, with the ability to measure the relative abundance of clovamide in the leaf tissues, they could grow just the 100 highest-clovamide trees instead.”