Shattered asteroid fell to Earth millions of years ago • Earth.com 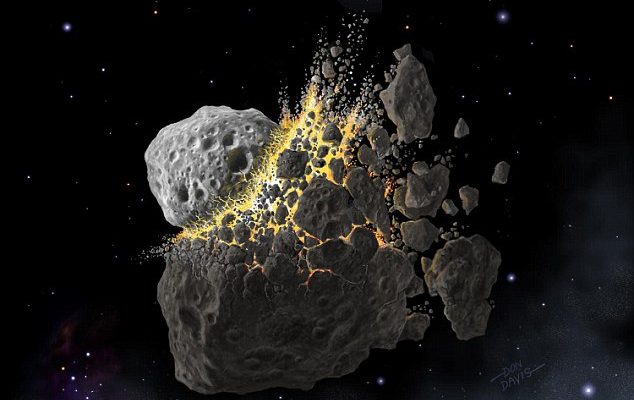 Shattered asteroid fell to Earth millions of years ago

Differences in mineral content show that some ancient meteorites may have been the remains of a shattered asteroid, according to a new study.

An equally fascinating find is that meteorites that date to about 466 million years ago are even more different. The find could be the remains of an ancient space disaster, the team said.

The researchers believe that some space object crashed into an asteroid between 466 and 467 million years ago. Based on the types of minerals found in meteorites from that time, the remains of the shattered asteroid seem to have fallen to Earth, they said.

The drastic differences between modern meteorites and those that fell in the past may point to other cosmic events. For example, a cratering event on the asteroid 4 Vesta may have sent basaltic meteorites down to Earth in another space disaster.

“This is the first reconstruction of the background flux of the different meteorite types in a geological time perspective. Similar reconstructions are ongoing for other periods in the Earth’s ­geological past,” the researchers wrote in the study.

To better understand the differences between modern and ancient meteorites, the scientists collected “micrometeorites” from an exposed seafloor in Russia that is millions of years old. They dissolved the minerals the micrometeorites were made of to expose the chrome-spinels that act as their core.

From there, they could determine what minerals they were originally made of, and trace them back to “families” of asteroids made of the same materials.

The study has shaken up astronomers’ beliefs about the solar system.

Astronomers believed that for the past 500 million years or so, the solar system has been relatively stable, the scientists said. The new study shows that this may not have been the case.

The study could help astronomers learn more about the evolution of the solar system’s asteroid belt, Heck said.

The study was published in the journal Nature Astronomy.