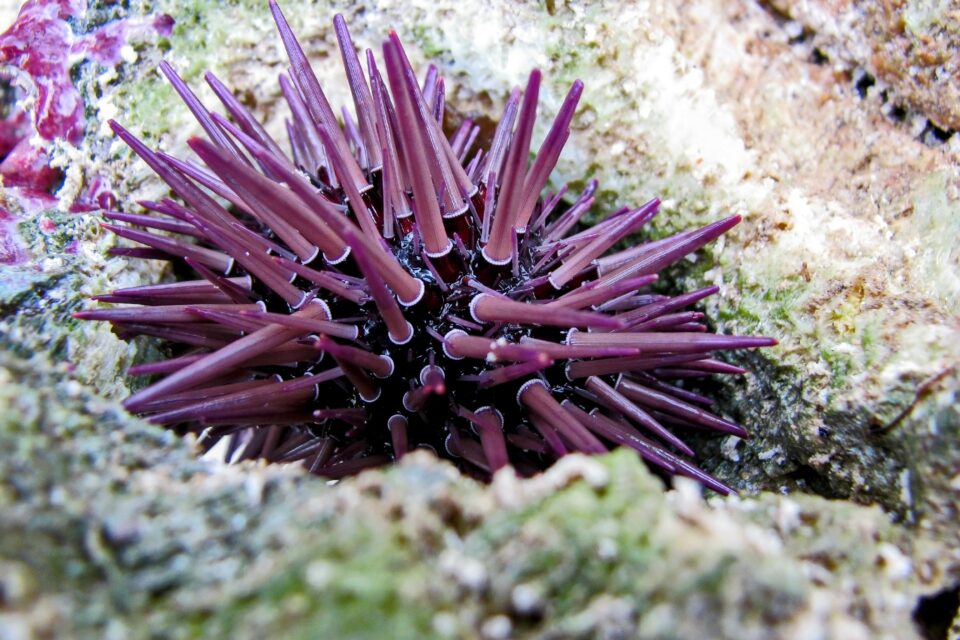 Sluggish sea urchins double their pace when they smell danger

Sea urchins look like spikey outgrowths of the ocean floor, but they are in fact living organisms, part of a group of animals called echinoderms (the same family that sea stars and sand dollars belong to). While to a casual observer they may seem sedentary, movement is an important part of this animal’s ecology, and thus an important part of nearshore ecosystems.

A new study from the University of Barcelona quantifies just how important the predator-prey relationships of these spiny sea-creatures are.

Study lead author Dr. Jordi Pagès and colleagues subjected captive sea urchins to the smell of one of their chief predators, the sea snail Hexaplex trunculus, and then observed their reactions for up to several hours.

“In short, sea urchins can perceive the chemistry of their predators and react instantly by changing their movement patterns. That is, they fear the predators and react accordingly. This response, coherent and consistent in all individuals, has an adaptive sense,” explained Dr. Pagès.

“This makes us think that, just like there are optimal movement patterns for finding food, there are optimized movements for escaping the predators.” This isn’t a new phenomenon, Dr. Pagès notes, as “there are fossil traces of echinoids in marine sediments that suggest that these urchins’ complex movements took place more than 50 million years ago.”

Even in the slow lane, the complex dance of predator and prey is important to understand for ecologists as they attempt to gain a better understanding of how ocean ecosystems function.

“Our study shows that if such a simple species like the sea urchin is able to react in such a clear way in front of a predator, it is worth to add this complexity to the predator-prey models,” concluded Dr. Pagès.

“Only by doing so will we be able to predict the coexistence capacity of predator and prey populations and understand the populational dynamics in nature.”