Snapping shrimp are getting louder as the ocean warms • Earth.com 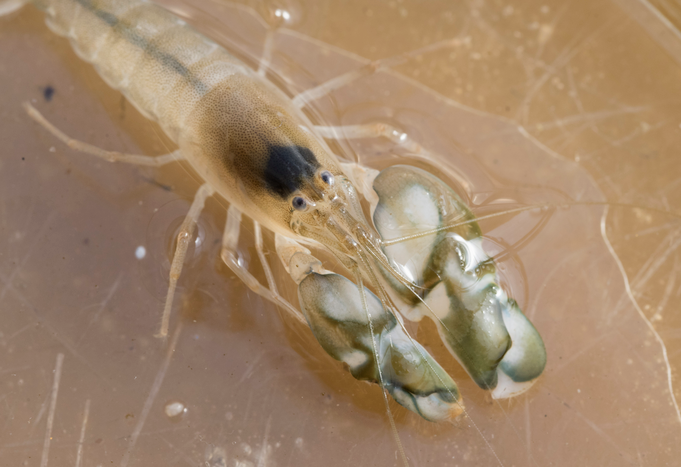 A humble shrimp is raising an alarm about climate change. A study published in the journal Frontiers in Marine Science has verified previous observations that two species of snapping shrimp snap louder and more frequently in warmer water.

Scientists from Woods Hole Oceanographic Institution (WHOI), Ashlee Lillis and T. Aran Mooney, were able to draw a clear connection between warming and snapping by analyzing shrimp off the coast of North Carolina.

The researchers observed that for every one degree (C) increase in water temperature, the shrimp snapped one to two decibels higher and increased in frequency by 15 to 60 percent. The researchers also discovered that the frequency of snaps more than doubled when the water was between 68 and 86 degrees Fahrenheit.

This behavior change is important because these tiny shrimp have a tremendous influence on the environment. Whales and dolphins use their sounds to navigate coastal areas, and the snapping attracts fish, shellfish, and coral larvae to good settling areas.

“These shrimp are the most ubiquitous sound producer in the ocean, and now we have evidence that temperature has a huge impact on their behavior and the overall soundscape,” said Lillis, principal scientist at Sound Ocean Science. “That’s relevant to everything from migrating whales to larvae trying to use the soundscape, or humans who use the sea for extractive or military purposes.”

Mooney points out that although it’s crucial for functioning ocean systems, crustacean behavior – as it affects the larger ecosystem – is often ignored when considering the consequences of climate change.

The research was conducted during a short-term heatwave, and the study authors stress that there are still many unanswered questions.

“Climate change is impacting the marine soundscape in fundamental ways,” Mooney said. “Warming waters can influence how animals are physically able to communicate and use sound to reproduce and attract mates. We don’t yet know what happens to the ecosystem when background noise levels are higher, but there are far-reaching implications.”