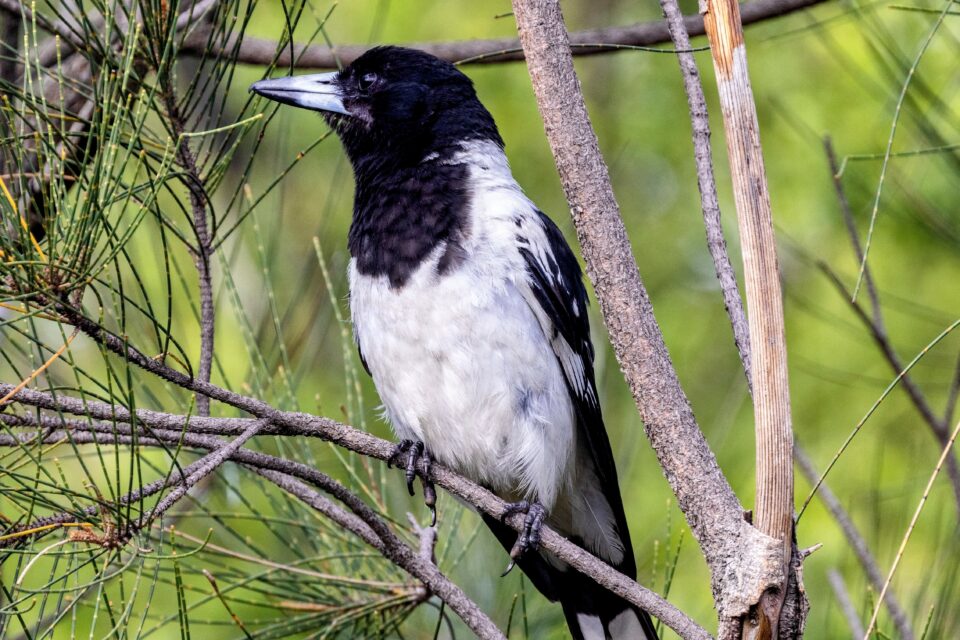 A new study conducted by birdsong scientists from the University of California, San Diego (UCSD) in collaboration with musicians from the Sydney Conservatorium of Music has found that the order of song elements – or the syntax – of Australian pied butcherbirds is strongly associated with the butcherbird’s rhythmical timing. In the human brain, grammatical syntax and musical rhythm processing have been found to share cognitive resources. The study suggests that songbirds could be processing syntactic-rhythmic relationship in a similar manner to humans.

The scientists and musicians involved in the research discovered that the order of song elements in Australian pied butcherbird songs share a productive relationship with how these elements are rhythmically timed. This relationship seems to be retained when the length of song elements is controlled, suggesting that how syntax and rhythm interact with each other in pied butcherbird songs is more than an artifact of simply producing song elements of different lengths in sequence.

“It is extremely exciting,” said study co-author Hollis Taylor, a fellow at the Sydney Conservatorium. “This collaboration adds to my previous documentation of the myriad overlaps between pied butcherbird vocalizations and human music genres. The musician in me recognizes the musician in them.”

According to Taylor and her collaborators, each bird sings differently, with phrases changing annually, and the songs are combinatorial. “Previously, songbird research has been dominated by studies of song syntax, or how song elements are ordered,” she explained. “Song rhythm, on the other hand, is relatively understudied. We know that if you provide a regular musical beat to children with communication disorders, their grammatical skills improve. To our knowledge, rarely anyone has thought about how syntax and rhythm might be related in birdsong.”

Until recently, birdsong researchers have mainly studied song syntax via information theory – a theory that originates in mathematics and is focused on the encoding of discrete symbols rather than on temporally-continuous bio-acoustic signals. While this has led to a rich variety of valuable studies on birdsong syntax, other aspects of songbird behavior have been largely ignored.

“Information theory tends to treat birdsong as chunkable units; our paper shows we can more directly use music theory to patch some of the inherent problems of information theory,” Taylor said.

Although further laboratory research is necessary to clarify whether songbirds truly process syntactic-rhythmic relationships in the same way as humans, these findings suggest that songbird and human cognition may have more similarities than previously thought, despite the fact that birds lack a layered cerebral neocortex, which is believed to support complex cognition in humans.

“Our paper adds to a gradually growing belief in the birdsong scientific community that we can start integrating what we know about how humans process music to understand how songbirds process their songs. In this pursuit, we can begin to understand the latent musicality of other animals, and in turn, re-examine our own musicality,” concluded lead author Jeffrey Xing, a researcher at UCSD.