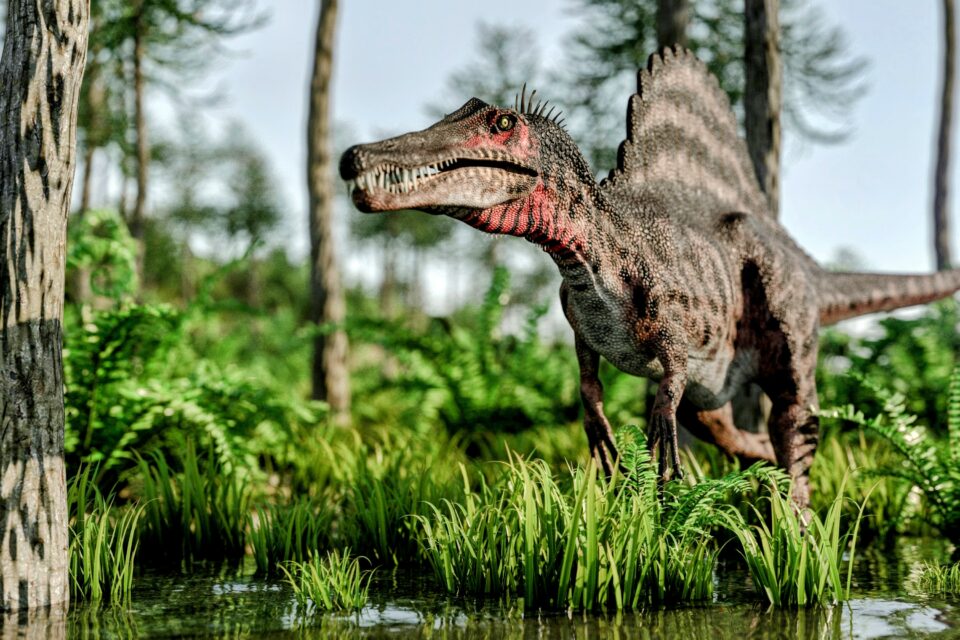 Many dinosaurs replaced their teeth as they fell out – a trait that is shared with modern crocodilians and sharks. Tooth replacement is useful for predatory animals whose teeth are used to hold struggling prey animals and are often broken off.

Now, new research shows that spinosaurids (a group that includes spinosaurus) replaced their teeth even faster than many other dinosaurs. This helps explain why so many spinosaurid teeth have been found littering dinosaur digs.

A team of scientists led by the University of the Basque Country assessed a partial spinosaurid jaw from the Late Cretaceous found in La Rioja, Spain. The jaw contained eight alveoli or tooth sockets and tooth remains. Indeed, the researchers found up to three teeth in a single alveolus.

“We recognized up to three generations of teeth in the same alveolus: the functional tooth of the animal, another tooth being formed and which would replace the first, and the germ of the one that would end up replacing the second,” explained Pablo Navarro, co-author of the research published in the journal Historical Biology.

“This suggests very rapid tooth replacement and is probably one of the reasons why so many spinosaurid teeth can be  found on the Iberian Peninsula during the Lower Cretaceous.”

Previous research showed that some species of spinosaurids were able to quickly replace their conical teeth, with an estimated time of 60 to 68 days. This research not only verifies the trait for the entire group, but also explains the mechanism of how this regeneration is possible.

“Throughout their lives these animals grew new teeth that gradually replaced the original ones and caused them to fall out. This means that the same animal could generate multiple teeth,” said Navarro.

“These teeth, more or less conical in shape and a centimetre in size, were transported by rivers, accumulated in lake areas and, over time, became fossilised,” said the researcher. They are one of the most common vertebrate remains in Iberian sites of the Lower Cretaceous (between 145 and 113 million years ago)”.

Although scientists aren’t entirely sure why spinosaurid teeth were replaced so quickly, it’s likely this ability gave them an edge over other predators.

The study is published in the journal Historical Biology