Dirty birdies: The case of the stinking bird • Earth.com 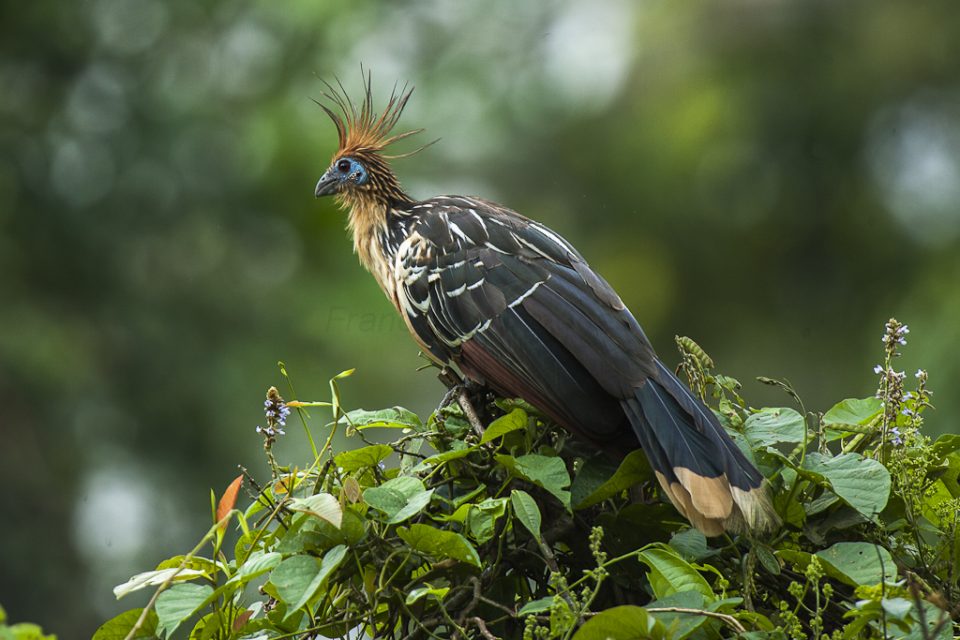 Dirty birdies: The case of the stinking bird

Ruminate on this: the peculiar process by which many mammalian herbivores digest plant matter has been remarked upon since ancient times. Aristotle analyzed the compartments of the ruminant stomach. Even the Christian Bible takes note of cud-chewing, an essential part of ruminant digestion that involves regurgitating and masticating food that has already passed into the digestive system in order to further break it down.

These animals make use of microbial symbionts, in concert with cud-chewing to extract the most nutrients possible from otherwise indigestible plant matter, notably cellulose and related compounds. Until 1989, the intricate process of fermenting plant matter in the foregut through symbiosis with microorganisms was thought to be restricted to artiodactyls and some marsupials—all of them mammals.

However, analysis of the unusual digestive processes of a South American bird, the hoatzin (Opisthocomus hoazin), determined that it too digests its diet of leaves by use of foregut fermentation. Though hoatzins don’t regurgitate their food and re-chew it like cows and other ruminant mammals, they do in fact chew their food to a degree, using the unusual serrations of their beaks. Their digestive process is otherwise similar.

The hoatzin is one of the very few obligate folivorous, or vegetation-eating, birds. This means that it subsists almost exclusively on vegetation, occasionally supplementing with flowers and fruit. The rarity of its digestive habits thus explains their obscurity. Most birds don’t require such a system and until the hoatzin digestive tract was intensively studied, it was simply assumed that birds digested their food in other ways. 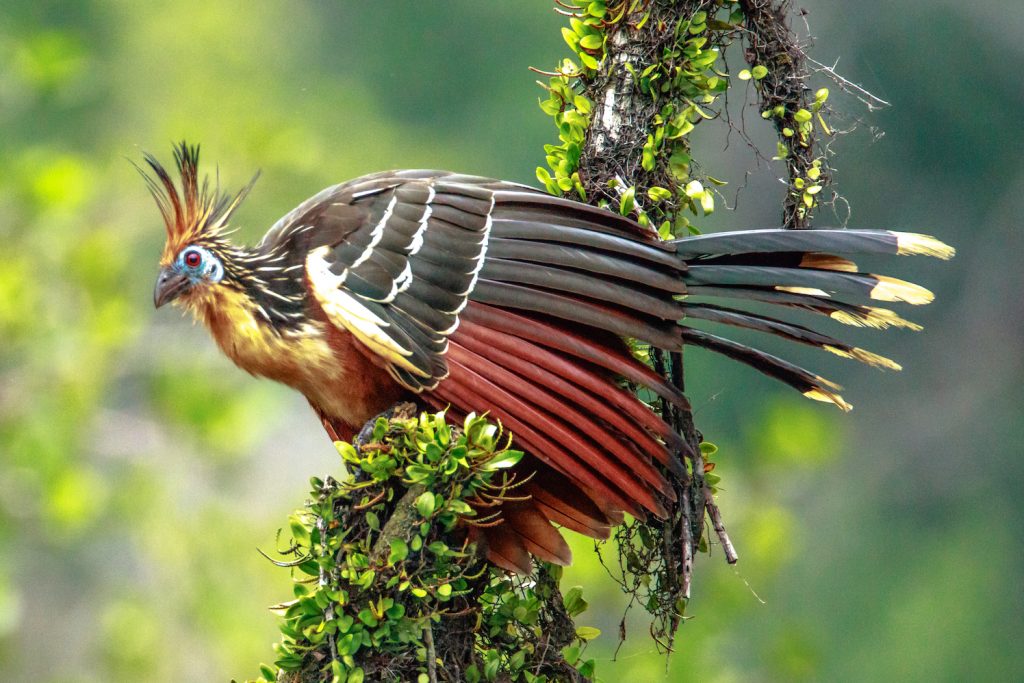 Since the discovery of the hoatzin’s ruminant digestive system, only two other species of bird have been found to share it—the green-rumped parrotlet (Forpus passerinus) and the speckled mousebird (Colius striatus). Most other folivorous birds ferment their leafy diets in the hindgut—the large intestine and cecum, closer to the end of the digestive system. Few of these other folivores feed exclusively on leaves as the hoatzin does.

While the microbial community that aids the hoatzin in processing roughage resembles those of mammalian herbivores, the majority of the species of archaea, bacteria, fungi, and protozoa found in hoatzins are unique. In addition to assisting in the breakdown of cellulose and hemicellulose, this complement of microbes is also thought to help detoxify certain leaves, neutralizing such compounds as saponins.

Though it does not regurgitate its cud like cows and other ungulates, its double-chambered crop does feature ridges that aid in grinding vegetation into smaller pieces. The fermenting foliage results in the formation of methane, which, like cows, the birds expel through burping. This has given them the charming colloquial name “stink bird.”

Most other birds use the crop to store food rather than to digest; digestion occurs in the gizzard, lower in the digestive tract. Because the crop of the hoatzin is so enlarged—it may comprise up to 17% of the bird’s body weight—it is a poor flyer. While it can get airborne for short distances, the hoatzin mainly gets around by climbing and flapping through the branches of the trees it inhabits. Its breast muscles are reduced and a special callus on the breast bone allows the bird to rest its engorged crop on a branch while digesting.

Its strange habits and morphology have provided a challenge to taxonomists looking to situate it in the larger avian family tree. Initially thought to be related to the extinct Archaeopteryx, a plethora of other relations have since been proposed. For some time, the hoatzin was grouped with the Galliformes, the chickens and pheasants. Since then, genetic and morphological studies have variously grouped it with the Cuculiformes (cuckoos and anis), Musophagiformes (turacos), Columbiformes (doves and pigeons), and Carlamiformes (seriemas). The most parsimonious recent analysis, from 2015, places the hoatzin at the base of the avian family tree and suggest that its ancestors evolved as long as 65 million years ago, making it among the most primitive of living birds.

The primitive evolutionary status is further reinforced by the presence of claws on the wings of the juveniles. In light of that feature, it’s no wonder that earlier theories linked it to the Archaeopteryx. Though a few other bird species, notably turacos, also have this feature in the juvenile stage, it is rare among modern birds but much in evidence in the fossil record. The young use these claws as climbing tools. Hoatzins nest on branches overhanging the rivers of Amazon and Orinoco basins. When the young are threatened by predators such as monkeys and snakes, they launch themselves into the water, and, when the threat is gone, climb back up to their nests.

Interestingly, while currently restricted to South America, the ancestors of hoatzins are believed to have evolved in Europe and Africa. Fossils resembling hoatzins have been discovered in France and in Namibia and Kenya. Though no extant relatives survive in the eastern hemisphere, the fossil evidence suggests that early relatives of hoatzins must have somehow reached western shores.

Fossils from Wyoming suggest that these relatives were once relatively widespread in North America and South America. Because the continents had already begun to drift apart by the time hoatzin ancestors emerged, and because hoatzins are weak flyers, it has been hypothesized that they colonized the western world by means of rafting. That is, large chunks of floating soil and vegetation were washed out to sea by rain and floods, and the early hoatzins went along for the ride, all the way across the Atlantic.

Unlike many of the animals of the Amazon rainforest, hoatzins are not particularly threatened and appear to have healthy populations throughout their range. Some have attributed this to the fact that hoatzin flesh is not particularly palatable due to its diet, diminishing the threat posed by hunting. There is some advantage to smelling like cow dung. However, tourist presence does, according to one study, negatively affect breeding. Nonetheless, the hoatzin has persisted for millennia, and like a feathered frat boy, will likely loll about the Amazon, belching and squawking, for years to come.