Study: New York City will frequently be under water in the next century • Earth.com 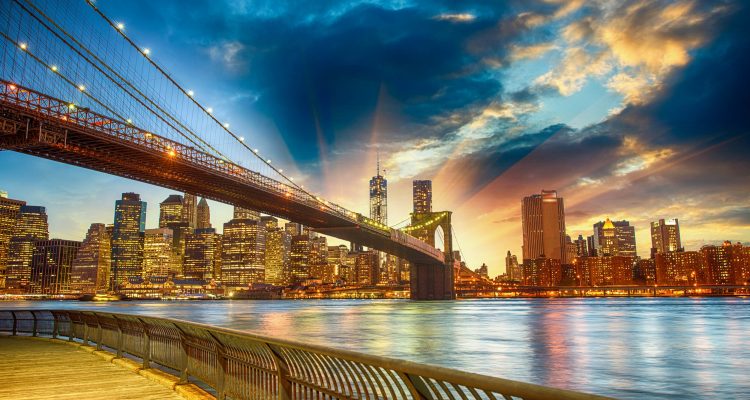 Study: New York City will frequently be under water in the next century

New York City can expect 9-foot floods, as intense as that produced by 2012’s Superstorm Sandy, at least three times more frequently over the next century – and possibly as much as 17 times more frequently, according to a paper published today by scientists at Rutgers University, Princeton University and the Woods Hole Oceanographic Institution.

The paper was published in the Proceedings of the National Academy of Sciences.

The study is based on a combination of historical data and computer model projections performed by Ning Lin of Princeton University, Benjamin Horton and Robert Kopp of Rutgers University, and Jeff Donnelly of the Woods Hole Oceanographic Institution. The historical data consist of tidal gauge records taken from New York City, going back to 1856, and geological records from the same area going back two millennia. The model projections consist of Kopp’s work on future sea-level models; Lin’s work on future storm intensity; and the work of Horton, Kopp and Donnelly on historical sea levels and storm surges.

The scientists ask the question: How frequent will floods like that produced by Sandy be in the future? Earlier research led by Andra Reed, now a postdoctoral scholar at Rutgers, had shown a 20-fold increase in the frequency of extreme floods, primarily as a result of sea-level rise, between the historic period from 850 to 1850 and the late 20th century.

The historic sea-level rise was largely due to natural effects, like the slow sinking of the land in the mid-Atlantic region in response to the end of the last ice age; but over the late 20th century, human-caused climate change came to dominate sea-level rise.

In the paper published today, the authors report that floods as intense as Sandy’s would have occurred about once every 400 years on average under the sea-level rise conditions of the year 2000, but that over the 21st century are expected to be about four times more probable due to an acceleration in the rate of sea-level rise.

“The grand answer is that things are going to get worse by 2100,” says Horton, who is professor of Marine and Coastal Sciences in the School of Environmental and Biological Sciences. “If nothing changes with hurricanes, sea-level rise alone will increase the frequency of Sandy-like events by 2100.”

But the size, intensity, and tracks of hurricanes may change. In the paper, Princeton’s Lin combined historical climate data and modeling of future climate conditions and storm surges. She found that these changes may lead to a more modest three-fold increase in flood probability, but may also break badly against New York City, making Sandy’s flood 17 times more probable.

“As we refine climate and hurricane dynamic models, we will have more accurate predictions that will allow planners to better design flood mitigation strategies,” said Lin, the study’s lead author.

The study built upon past work by Kopp, professor of earth and planetary sciences in the School of Arts and Sciences, estimating sea levels over the 21st century. “We ask, ‘What is likely?’ and ‘What are the extremes?'” Kopp said. “We take into account factors that cause local sea level to vary from global sea level. And we’ve shown, through geological investigations, that our projections are consistent with the assumption that temperature and sea level will be related in the future as they have been over the past two thousand years.”

Projections are not predictions and, Horton says, the spread between what’s “likely” and “extreme” is an indication of the complexity of future projection. “Things are only going to get worse by 2100,” Horton says. “It’s just a question of how much worse it will get. There is no happy scenario.”