As stunning super blooms spring up, tourists often get carried away • Earth.com 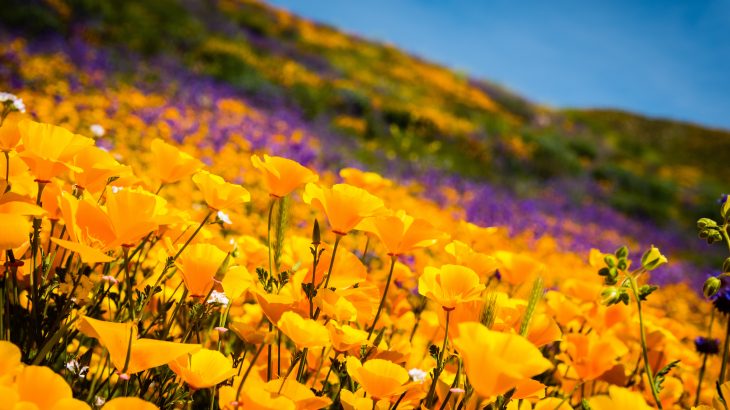 As stunning super blooms spring up, tourists often get carried away

So far, 2019 has been a good year for an abundance of wildflowers.  So-called ‘super blooms’ have been reported in the hostile climates of Death Valley, Phoenix, and elsewhere.  According to the Arizona-Sonora Desert Museum, there are some critical factors involved in how many wildflowers will bloom in any given spring.

Desert wildflowers germinate in the fall.  A rain during the germination period is important for wildflowers in the spring.  This initial trigger rain is followed by an unusually wet winter season for a ‘super bloom’ to occur.  Spectacular blooms occur in the Sonoran and Mojave deserts about once every 10 years. Of course, perennial desert plants often flower with less rain the pickier perennials dependent on rain for germination.  Southern California has been the heart of this particular super bloom, much of the landscape being covered in a veritable sea of golden poppies.

Lake Elsinore, a Southern California town located on the shores of a lake by the same name, has been a popular destination for visitors.  Lake Elsinore is in an area long inhabited by Native Americans and until recently been a small town, now grown to a population of over 60,000.  News and social media have made this part of California especially popular.  Not only super blooms of wild flowers but also large numbers of painted lady butterflies (Vanessa cardui) are being attracted by the flowers.  The butterfly migrates from Mexico into California in one generation and further north in the next, the generation after starting a southern migration.  In 2005, during a year of exceptionally good blooms, it was estimated that there were billions of butterflies flying over Southern California, according to NBC News.  Now, the city of Lake Elsinore is being crowded even more by people. 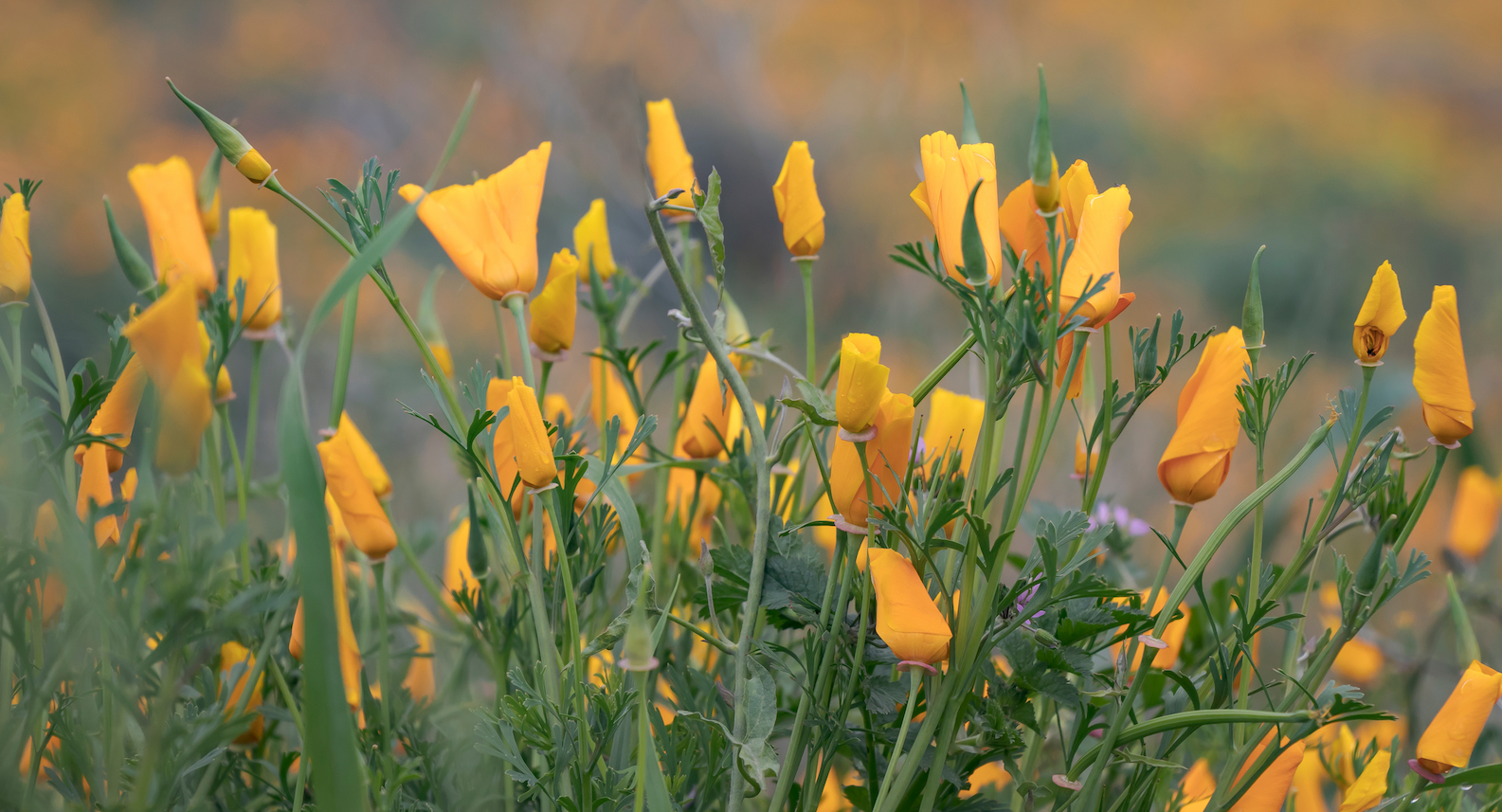 According to Ecowatch, as many as 50,000 tourists visited Lake Elsinore to see the fields of poppies, nearly doubling the population.  Traffic leading to the best places to view the super blooms has been congested and slow. People trampled the flowers to get the best selfies in the fields of blooms.  Quickly, elation over natural beauty turned to discomfort caused by the massive influx of tourists. Photos captioned #superbloom by tourists were quickly followed by photos tagged #poppynightmare on social media.  The city of Lake Elsinore itself has taken to bemoaning the influx of visitors on its FaceBook page.

The Guardian reports that the situation got so bad that Walker Canyon, one of the more popular places to visit the poppy super bloom, was closed temporarily.  In the midst of the swarms of people, not only is the city becoming crowded and the roadways congested, the poppies themselves are being loved to death.  In the frenzy to see and photograph the super bloom, people are actually trampling the flowers under foot. The problem is spread across Southern California, not just Lake Elsinore.

Antelope Valley Poppy Reserve, a California State natural reserve, is another popular place to view the super bloom.  The official website encourages visitors to come and enjoy the fields blanketed in flowers but advises those that do to stay on official trails, not bring dogs and to not pick the flowers.  Commercial or student film and photography also requires a permit. What the rules don’t explicitly say is to not land a helicopter in a poppy field. 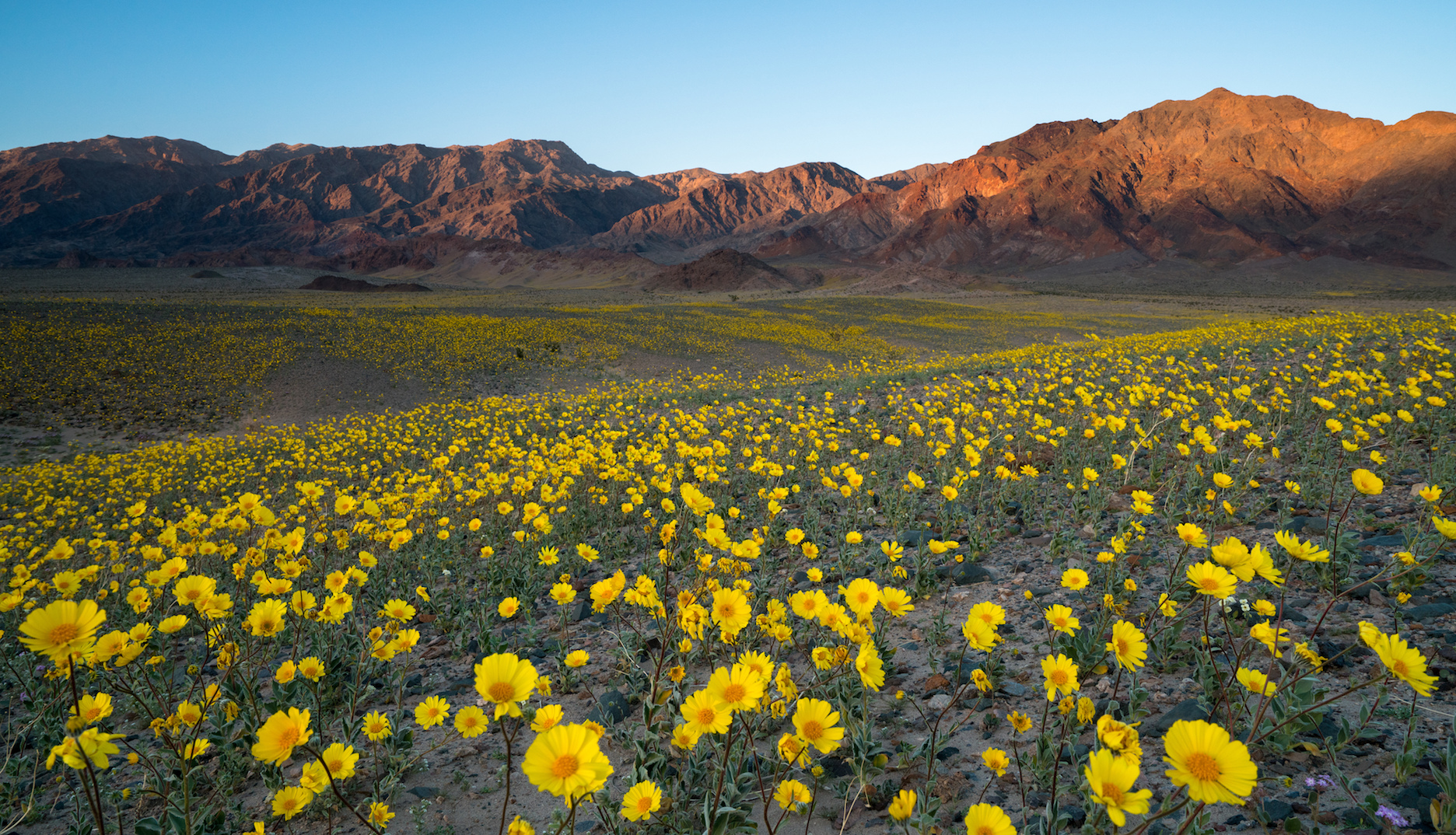 Recently, The Guardian reports, a couple did just that.  A helicopter landed in an open field of poppies and a man and woman got out and started walking around, crushing even more of the flowers than their helicopter did.  As law enforcement officials approached, the two jumped into the helicopter and quickly flew away. This act, although not described in the rules on the official reserve website, is illegal and is now being investigated.  Officials are also on the lookout for people entering the reserve illegally by ducking through barbed wire fences. With the number of visitors now, it’s easy to worry about the poppies being trampled. All this havoc is despite early preparations in California.

At Lake Elsinore, officials knew of the possibility of crowding and damage from tourists.  In 2017, tourists arrived in large groups to view that years stunning super bloom. Observing the weather over the winter, city officials tried to prepare, reports The Press-Enterprise. More law enforcement officers were made to be present and more signs were put up to warn people off the poppy fields, yet the mess seemed almost unavoidable given the power of social media.  Walker Canyon is managed for wildlife and native plants, with a few trails, so the focus isn’t on tourism or recreation but conservation, which makes managing the huge number of visitors a challenge.

Not only the plants and wildlife suffer, but the tourists endangered themselves and others as well.  People were pulling onto the shoulder of roads to illegally take selfies. Rattlesnakes come out of hibernation around this time and at least one super bloom visitor was bitten by a snake, another was injured scrambling over rocks to flee a snake.  Unfortunately, beautiful places often suffer from people ‘loving them to death’.

California is a huge tourist destination and many popular hiking and camping destinations there and across the west are increasingly crowded, sometimes with people unaware of proper outdoor etiquette.  Huge numbers of visitors combine with other challenges to conservation, such as climate change which may be affecting iconic plants in places such as Joshua Tree National Park and Saguaro National Park.  The poppies and other flowering plants part of the super bloom may be affected as well.  It may seem to some like this recent super bloom repudiates the idea of a trend towards hotter drier weather, as but Desert Sun reports, it’s just an anomaly.

Fewer young Joshua Trees are growing in Joshua Tree National Park, one of the places to see the spectacular super bloom, despite this year’s especially wet conditions.  Annual flowers are one thing; quickly growing plants depending on only one season of good moisture to thrive – for a year.  Joshua Trees and cacti are another thing – slow growing plants that can establish themselves in dry hot conditions but may have a hard time when young as the climate becomes increasingly hotter.  Fewer super blooms seem likely in the future as well, despite this one and the tourists will make it harder for the flowers to continue to bloom even in the rare conditions when they can in such numbers.