The decline of the saguaro? • Earth.com 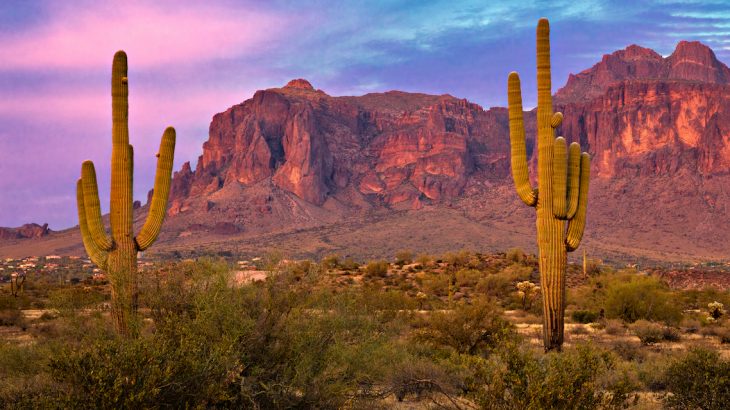 The decline of the saguaro?

The Sonoran Desert is towered over by one of the most iconic of plants.  Saguaro cacti (Carnegiea gigantea) are so unique that seeing one in a photo, a painting or in person brings to mind scenes of the old west and wild desert.  The saguaro is unsurprisingly, the largest cactus found in the US and it’s certainly one of the easiest to recognize, nothing very similar is found through most of the saguaro’s range in the US.

There of course are organ pipe cacti of the Organ Pipe National Monument but organ pipe cactus appear more like a cluster of cactus-like tentacles erupting from the ground than the singular trunk with arms of the saguaro.  If you drive south of the border, the simple image of the giant columnar cacti painted in Arizona becomes complicated.

The Mexican giant cardon (Pachycereus pringlei) might be confusing as it’s found just south of the border in Sonora, Baja California and Baja California Sur; the cardon grows much larger than even the saguaro though.  Throughout the Americas, there are approximately 170 species of columnar cacti.  Columnar cacti can be found even in the Andes, where driving from the Amazon and cresting the mountains a transition into stark desert where rain is rare can be shocking.  Even with the broad range of columnar cacti as a group, it’s hard not to be impressed by what amounts to a very dry forest made of towering cacti surrounded by various ‘shrubs’ that are also a half-dozen species of cacti.  This is the magic of the Sonoran Desert in Arizona.

Saguaros are an important part of the Sonoran desert as something of a keystone species.  Saguaros are pollinated by bees, birds and less commonly by bats. Coyotes and other wildlife eat the saguaro fruit.  Gila woodpeckers peck nests into the outer part of saguaros while gilded flickers hammer deeper into the cactus for their homes.  The Gila causes no serious damage but the gilded flicker is a less friendly woodpecker and can cause real harm to its host. Stems weakened by gilded flicker homes may break in storms and eventually cause the death of a saguaro.

Many invertebrates make good use of the saguaro for a home as well and empty woodpecker burrows are used by owls.  Hawks and other larger birds sometimes make nests where the saguaro arms meet with the main trunk as they would with a tree.  Native peoples have long collected saguaro fruits for food as well as wine. Some native people also used the waxy ‘boots’ that form when a woodpecker makes a hole in the saguaro to carry water or food in.  Ribs from dead saguaros are good for creating shaded ramadas, furniture and can sometimes be handy walking sticks.

The main cause of death for the saguaro in their upland habitat in Arizona where they’re most plentiful is freezing.  A saguaro that survives a freeze is marked with a pinched section drawn around its trunk. Lighting also hits some saguaros, causing a tremendous explosion of the cactus.  Saguaros like all plants must die, but is the future for the entire species threatened?

There is a persisting tale of a slow demise of the saguaro.  The Desert Museum reports that the first fear of saguaro extinction dates back to the 1940s and it explains why there is an eastern and western unit to Saguaro National Park, on either side of Tucson Arizona.  The eastern section of Saguaro National Park was first selected because the area was full of large, impressive, mature saguaro cacti.  These were older individuals nearing the end of their 150 to 200 year life span.

Because of ranching in the area, much of the Palo Verde and other bushes that create shade where young saguaros start their lives were absent.  There were very few young or middle aged saguaros in the original Saguaro National Park. So the older cacti started dying in large numbers and the park officials panicked.

The western unit of Saguaro National Park was founded on the other side of Tucson in hopes of protecting the cacti even if all the saguaros in the east died of a mysterious disease.  Dead cacti were bulldozed and buried in the desert in hopes of stopping an unknown pathogen. Over time, the idea of the decline of the saguaro has surfaced again and again, due to bad science and sensationalized journalism.  Again, the idea of a mass saguaro die off is in print and it’s fair to ask whether this time is different.

Tucson.com reported on December 10, 2018 that scientific monitoring is finding fewer saguaro seedlings than usual.  Tom Orum and his wife Nancy Ferguson have monitored saguaro cacti in the eastern unit of Saguaro National Park for forty years.  The scope of their work is looking at 600 individual saguaros spread over 60 acres. The saguaros have been continuously monitored since 1941.  Tom and Nancy are the third generation of monitors. Since the 1990s, it seems like the couple might’ve noticed a decline in young saguaro numbers.

A 2018 study shows that indeed there are fewer saguaros on both sides of the National Park. According to Pinal Central, a survey headed by National Park biologist Don Swann found only 70 saguaros younger than 15 years in 10,000 saguaros in the whole park.  Older saguaros are well adapted to the hot, dry climate of the Sonoran desert. Younger cacti are more dependent on the two rainy seasons of the region.

Arizona has been in a drought since 2000 and it’s unclear whether climate change is causing the drier conditions.  A recent study found that since 1950, Saguaro National Park has warmed by roughly 1.2 degrees Celsius. Saguaros are dependent on specific climatic conditions; the change in temperature could presage a slow march to higher elevation by the cactus.  Eventually the high ground would run out if conditions continued to warm and then the saguaro would die out.

As bleak as that scenario is, it’s far from certain.  It’s good to remember history and be cautious. Tom Orum, the cacti monitor, himself a retired plant pathologist thinks more research is needed before we cry wolf.  Saguaros have been monitored for only a very short period, especially for a plant that can outlive a person by 100 years or more under good conditions. Scientists have jumped the gun in crying doom for the saguaro more than once before.  Let’s hope this time it’s another case of no news for the west’s most iconic cactus.