Suraj the elephant: a harrowing story of survival • Earth.com 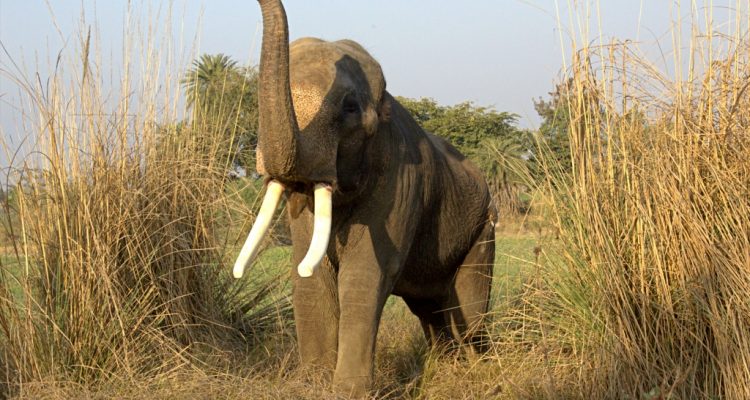 Suraj the elephant: a harrowing story of survival

Suraj the elephant spent many of his 45 years on Earth chained up in a tiny, dark room in a temple located in the Indian state of Maharashtra. He was kept dehydrated and malnourished while held as an attraction for temple visitors. That is, of course, until a year ago, when Suraj was finally saved by wildlife rescue workers.

According to Yahoo News, when Wildlife SOS (WSOS) volunteers found Suraj, he was living in “solitary confinement in a 20 foot by 20 space with tight spiked chains on all four limbs… 24/7, from dawn to dusk.”

The rescue effort turned out to be no easy operation. According to Daily Mail UK, WSOS workers needed an armed team of more than 70 law enforcement officials to settle a stand-off with 200 temple supporters.

Emancipation was only the first step in Suraj’s road to recovery. At the time of his rescue, Suraj was in such rough shape from his years in captivity that a crane was needed to lift him onto his feet. While he has made incredible progress since then, many of Suraj’s health problems have continued to require daily care from the WSOS team.

“You can’t undo 50 years of abuse in just a few weeks,” said Rhea Lopez, WSOS Elephant Campaign Manager. “But over the first few months at the center, we’ve gotten to know Suraj — experiencing his first taste of freedom, his capacity to forgive, and his absolute joy in little things. It’s rewarding and just completely indescribable.”

“It’s amazing to see the progress Suraj has made in the last year,” added Nikki Sharp,  Wildlife SOS Executive Director. “Sometimes it’s hard to imagine the amount of pain and loneliness he endured for so many years. We can’t return him to the wild from where he was taken, but we can give him some joy in his life. Seeing him doing so well makes us more motivated to help others in a similar situation as he was.”

Suraj the elephant has since been named one of Time magazine’s Most Influential Animals of 2016. According to Daily Mail UK, he now spends his days “strolling free, foraging, investigating new smells and sounds.” Suraj also allegedly loves peppermint, peanuts, and papaya.