Reynard of the steppes: The Tibetan sand fox • Earth.com 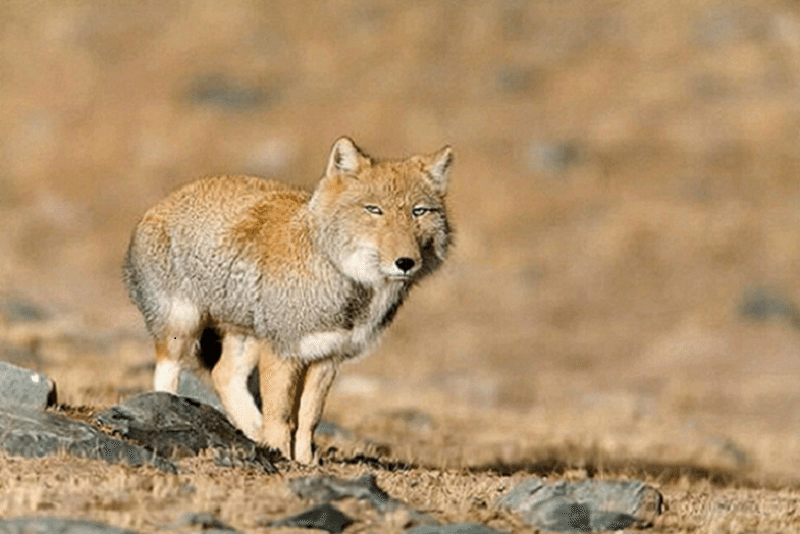 Reynard of the steppes: The Tibetan sand fox

Even in an era when the highest reaches of the atmosphere and the lowest depths of the ocean are accessible to industrious scientists, some relatively large animals escape notice. Whether because of their remote habitats or cryptic habits, they haven’t worked their way into the public imagination as other charismatic megafauna have.

It’s sort of astounding, really. The internet is saturated with cute animal photos geared at feeding a culture addicted to the dopamine hits they elicit. You’d think that every remotely charming creature known to man would have gotten its viral moment in the sun at this point. Everything from the dumbo octopus to the Japanese dwarf flying squirrel has ridden the so-called “cute response” to greater levels of renown.

Ethologist Konrad Lorenz called this the Kindchenschema—the set of proportions that lead humans to believe an infant or another animal is cute. Among these factors are a large head, stubby limbs, and chubby cheeks. A few critters still wait in the wings, prime-time ready but still relatively obscure. The Tibetan sand fox (Vulpes ferrilata), a small canid native to the Tibetan Plateau of China, Nepal, Bhutan, and India, is one of them. A more charming ambassador for the region hasn’t emerged since the Dalai Lama. And this one doesn’t spout irritating platitudes.

Highly adapted to the harsh climate of its home, the fox is swathed in luxurious grey-gold fur. (It’s Latin name means “iron-grey side.”) It’s so furry, in fact, that it appears almost cartoonish. With its slitted eyes and slyly smirking expression, it looks like a CGI fox that ought to be voiced by Benedict Cumberbatch or Cate Blanchett.

And those cheeks—if those fluffy jowls don’t fit into the Kindchenschema, I don’t know what does. Known to Western science since the mid 19th century (1842), when British diplomat Brian Hodgson described it, along with many other animals of Kathmandu, where he was stationed, the Tibetan sand fox is still relatively poorly studied. That is perhaps true of most of the animals that share its remote highland habitat.

Sometime called the “roof of the world,” the Tibetan Plateau is surrounded by mountains, including the Himalayas, and supports a relatively small population of pastoralist nomads. It is significant to humans in that it hosts the headwaters of many of Asia’s major rivers, including the Brahmaputra, Yangtze, and Mekong. Among the few to have studied the wildlife of the area is biologist George B. Schaller, who recalls running over a Tibetan sand fox when it bolted in front of his truck. The unfortunate fox was found to have swallowed a whole pika.

It is the fox’s relationship to the pika, specifically the plateau pika (Ochotona curzoniae), that is best studied. In fact, most Tibetan sand foxes have been found in the vicinity of pika colonies. These lagomorphs—relatives of rabbits—appear to be its preferred prey species, with studies of fox feces finding pika remains in nearly all of them. When pikas are scarce, they will also eat plateau zokors (Eospalax fontanierii) and other small rodents, birds, insects, plants, including Ephedra berries, and even carrion left by wolves and bears.

Just as their close relative the Arctic fox follows polar bears, hoping to scavenge from their kills, Tibetan sand foxes are known to follow brown bears (Ursus arctos). However, they’re not usually after carrion, which is a last resort for them. Instead, they’re hoping to prey upon pikas fleeing from the bears, who dig up their burrows. This relationship sits on the border between kleptoparasitism and mutualism—while the bear doesn’t necessarily gain anything from the relationship, neither does it lose anything. It would be unlikely to catch the pikas fleeing from their other exits anyway.

Interestingly, the Tibetan sand fox shares much of its range with the similarly sized red fox (Vulpes vulpes). However, because the red fox is a more generalist predator and prefers to hunt at night, as opposed to the crepuscular and occasionally diurnal habits of the Tibetan sand fox, there appears to be little competition between the two species.

While the IUCN lists the species as being of “least concern,” suggesting relatively stable populations, and CITES doesn’t bother with a mention, the Tibetan sand fox is actually at some risk due to its reliance on the pika. Since 1958, extensive government campaigns have sought to poison the pika due to the notion that its burrowing habits degrade rangeland used for pasturing livestock. Luckily, because most of these poisoning efforts are conducted on foot by inexperienced workers, they have been only sporadically effective.

Though they may occasionally be preyed upon by wolves and birds of prey, one of their other main threats appears to be human-related as well. Stray and feral dogs are known to take foxes, which are substantially smaller and thus easy prey. As if this weren’t bad enough, these dogs may then transmit a fatal tapeworm infestation back to human settlements.

Tibetan sand foxes are the primary hosts of the tapeworm Echinococcus multilocularis; pikas may also serve as intermediate hosts. This cestode causes alveolar echinococcosis (AE), a disease in which tapeworms infect the liver and other organs, damaging them beyond repair if not detected early enough. It can be fatal. Though no programs aimed specifically at controlling foxes due to the risk they pose to humans as a zoonotic vector, it is a situation worth monitoring.

With its unusual lack of territoriality and tendency to mate for life, this adorable canid is Pixar fodder just waiting to be harvested. Let’s not let what happened to the recently extinct Spix’s macaw (Cyanopsitta spixii), star of the animated Rio, happen to the Tibetan sand fox. It would be a shame to lose this species before its habits—and its importance to its ecosystem—are fully known.