Tidal flats are under pressure from urban expansion • Earth.com 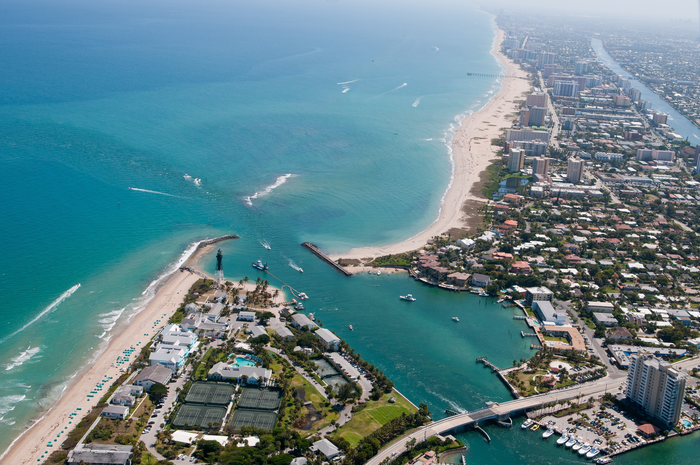 Tidal flats fringe the edges of coastal areas and are important ecosystems for plant and animal communities, as well as for people. They include beaches and coastal wetlands, both of which are used extensively for human activities, such as fishing and bathing.

These areas, where the tide rises and falls each day, act as buffer zones between the land and the ocean, and can protect coastal communities from the most severe effects of extreme weather events such as hurricanes, tsunamis and floods. However, urban expansion and ever-increasing pressure from human activity threaten the functionality of these tidal ecosystems, and even their very existence, as people seek new places to occupy and build infrastructure.

About 29 percent of the United States’ population lives in coastline counties – more than 41 million live in Atlantic counties alone. This high population density poses a critical threat to coastal areas because it brings with it intense human activity, some of which is focused on the tidal flat areas. Although several recent studies have found that tidal areas are shrinking due to direct and indirect human activity, there is as yet no unified method for assessing or quantifying the interactions between urban areas and tidal flats on a large scale. At best, research is focused on local areas only and uses different methodological approaches.

Researchers from Florida Atlantic University have now developed a novel approach that quantifies patterns of change in tidal flats from a spatiotemporal perspective, using data that has been collected over time. For their study, they analyzed the annual dynamics of three highly urbanized coastal counties in the southeastern U.S., namely Charleston in South Carolina, Chatham in Georgia, and Duval in Florida.

The area under investigation contains several unique environmental settings, including a tidal flat system of more than 3,168 square kilometers that is characterized by numerous sounds, estuaries and wetlands. The researchers identified and quantified the tidal flat losses in these three counties, between 1985 and 2015, that were directly or indirectly associated with urban expansion. Their study is one of the first to investigate correlations between tidal flats and urban areas using this technique.

The data used in this study came from the 30 m annual map collection of urban extent in the U.S., which was derived from Landsat images taken between 1985 and 2015. The National Land Cover Database (NLCD) archives the land cover maps in different time periods throughout the U.S., which provides worthwhile references for urban mapping before 2011. In addition, a set of nighttime light images given by the Visible Infrared Imaging Radiometer Suite was used for analysis of urban extent after 2011. Using a similar approach, data from 30 m annual maps of tidal flat areas in the southeastern U.S. between 1984 and 2020 were also used.

The results also showed that the tidal flats are under pressure from urban expansion from both the eastern and western sides. In particular, the western side has been rapidly urbanized during the three decades, giving Duval County the largest new urban areas within two kilometers of the coast. Duval County has experienced more erosion and urban growth than the other two counties and also has much smaller tidal flats than the other two counties. It has the largest newly urbanized area toward the seashore. Compared with the two other counties, Duval County also has a less stable environment of tidal flats, which calls for a higher level of public awareness and concern.

Meanwhile, some suburbs in the two other counties have also been rapidly urbanized, including the eastern and western wings of the city of Charleston and southwestern side of the city of Savannah. These urbanizations would have affected the surrounding tidal flats, with the closest areas experiencing higher environmental pressures.

The researchers found that, in locations where new urban areas overlap with tidal flats, the constant shrinkage of the tidal flats is hysteretic to (lags behind) the accelerated process of urbanization in the coastal area. This hysteresis effect also exists in the restoration and management of ecosystems, and severe damages could result in irreversible changes.

“It takes time to observe the follow-up ecological effects of urban expansion in recent years. Based on our research, the tidal flats in these three counties urgently need a sustainable plan of management in response to the rapid expansion of urban areas,” said study senior author Dr. Weibo Liu.

These results highlight the conflicts between intensified human activities and tidal flat environments. The study authors said that, in order to deal with this environmental crisis, the conflict between human beings and the coastal environment urgently calls for public awareness, as well as effective collaborations between lawmakers, scientists, and local authorities.

“Urban expansion is regarded as one of the major anthropogenic threats to the environment of tidal flats,” said study first author Chao Xu. “While it is challenging to stop the inundation process driven by sea level rise, a more practical solution would be to limit urbanization near the shoreline. This way, tidal flats would be more flexible to migrate toward the inland area.”

The researchers propose that their method could be modified and then usefully applied to assess changes in tidal flat areas around the entire coast of the U.S., and even in other areas of the world.

The study is published in the journal Earth.