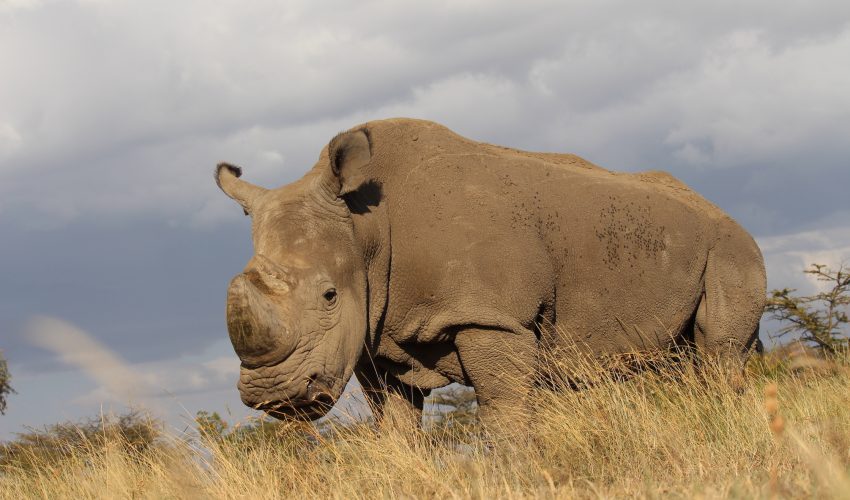 The world’s last male northern white rhino is also the world’s “most eligible bachelor” according to a new campaign by a Kenyan wildlife conservancy and the dating app Tinder to raise awareness and money to save the endangered species.

The goal is to raise the $9 million needed to protect the northern white rhino from extinction. When Tinder users ‘swipe right’ on Sudan’s profile, they will be directed to a page where they can donate to the cause.

“I don’t mean to be too forward, but the fate of the species literally depends on me,” the rhino’s profile says. “I perform well under pressure.”

Sudan, 43, lives at Ol Pejeta Conservancy in Kenya with his two female white rhino counterparts, Najin and Fatu who have been unable to breed naturally due to a range of issues including old age. They are  the last three northern white rhinos, according to Ol Pejeta. His species is considered to be extinct in the wild, a victim of widespread poaching and civil war, the conservancy said.

The funds raised from the Tinder campaign will go towards ongoing research into reproductive techniques to gradually build up a viable herd of northern white rhinos using stored sperm and embryos.. Once fertilized, the embryos would be transferred into surrogate southern white rhino females

“The plight that currently faces the northern white rhinos is a signal to the impact that humankind is having on many thousands of other species across the planet,” said Richard Vigne, the conservancy’s chief executive officer. “Ultimately, the aim will be to reintroduce a viable population of northern white rhino back into the wild, which is where their true value will be realized.”