Why tomatoes, peppers and other nightshades have such an infamous reputation • Earth.com 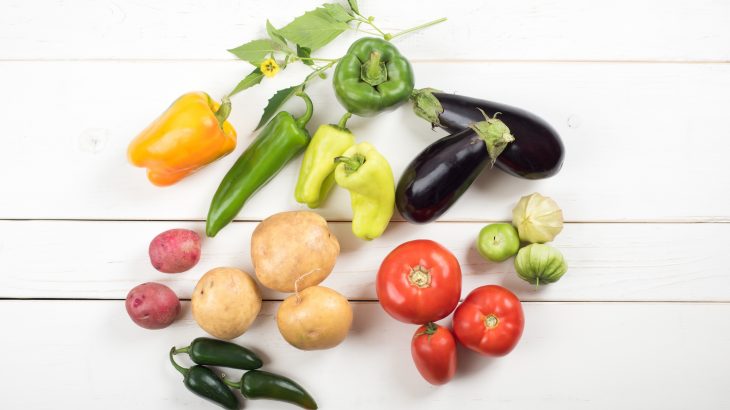 Why tomatoes, peppers and other nightshades have such an infamous reputation

Tomatoes, potatoes, eggplants, tobacco, mandrake, and datura are close relatives. They are all members of the infamous nightshade family (Solanaceae.) Many of its members are actually deadly toxic. Some have been used to create psychoactive brews and potions. Others were Shakespeare’s poison of choice. This has led to their association with witchcraft and evil. However, nightshades also include some of the world’s most popular foods.

This contrast reveals the complexity of this plant family. What is clear is that the nightshades have played a large role in many cultures. The foods, drugs, and poisons derived from this family have played essential roles at key moments in history.

The infamy of Solanaceae is well deserved, so let’s take a closer look at a few of this family’s most interesting and famous historical cameos.

Flying ointments are herbal preparations associated with “witchcraft.” They are theorized to be the historical origin of the trope of a “witch on a broomstick”.

These preparations were psychoactive oil-based extracts or salves. They were likely an important element of pre-Christian European religions and medicine. Along with other traditional religious practices, these were characterized as evil witchcraft during the middle ages and since. This has led to the amalgamation of what was likely a diverse religious history in Northern Europe into the simplified concept of “witchcraft.”

These practices were a combination of religion and traditional medicine. Many drugs derived from these “witches herbs” are still in use in modern medicine.

Much of what we know about these preparations is tainted by Christian witch trials. Surviving recipes and samples of flying ointments show they contained animal fats and herbs. These include hallucinogenic and toxic nightshades such as mandrake, deadly nightshade, henbane, and datura. The use of these herbs likely induced trance-like states in which users felt sensations of flight and transformation.

These preparations were applied to the skin as well as permeable mucous membranes including the vagina and anus. This route of administration likely contributed to stories of female witches flying on broomsticks. The Catholic magisterium, sexual chastity, and patriarchy were likely threatened by these practices. These are some of the earliest uses of nightshades in Europe.

Plants in Solanaceae were added to beer in place of hops in many traditional recipes. Henbane is called “bilsenkraut” in German. This is the root of the name “Pilsen,” the Czech city where Pilsners were created. In order to increase the apparent intoxication of beer, henbane was traditionally included in Pilsen beer. Nightshades were a common beer additive.

This practice was eventually made illegal due to the high risk of fatal intoxication from henbane. The “Reinheitsgebot” laws were created in the early 16th century to limit the ingredients in beer to water, barley, and hops. This notably excludes yeast since its role was not yet known.

Hamlet’s Father Was Poisoned by Henbane

“Sleeping within my orchard,

My custom always of the afternoon,

Upon my secure hour thy uncle stole

With juice of cursed hebenon in a vial,

And in the porches of my ears did pour

Holds such an enmity with blood of man…”

It has been conjectured that the “hebenon” Shakespeare mentions is an extract of henbane.

However, this work of fiction takes some liberties with the particulars of the poison’s effects.

In 1676, British soldiers were sent to the colony of Jamestown to prevent an uprising. They were not there long before many of the soldiers ate a salad of datura leaves. American historian Robert Beverly, JR. wrote: “they turned natural fools upon it for several days.” This event led to a common name for datura, Jimsonweed. This is a mispronunciation of “Jamestown Weed.”

Tobacco (Nicotiana spp.) is another addictive and toxic herb in the Solanaceae family. Occurring natively in the Americas, this plant has a long history of use by native groups. It contains a complex mixture of bio-active chemicals. The most notable of these is the stimulant nicotine. Nicotine has become one of the most popular drugs in the world. As a result, tobacco use now causes 7 million deaths per year around the world.

Tobacco also produces harmala alkaloids. These compounds act as MAOIs, modifying the body’s metabolism of neurotransmitters and drugs. This can contribute to the addictiveness of tobacco and other drugs.

Europe Was Terrified of the Tomato

After Europeans discovered tomatoes in the new world, they were brought back to Europe. However, they quickly became known as “poison apples.” This was because nobles who ate them were becoming mysteriously ill. Since these plants were in the same family as many poisons, the tomato was blamed.

In reality, the culprit was lead. Royals often ate off pewter plates. When these were exposed to the acidity of tomatoes, they leached lead. This lead poisoning was leading to the sickness and death associated with tomatoes.

Peppers are another group of edible nightshades. The link between deadly poisonous nightshades and tear-inducing peppers may seem natural. However, the primary spice causing chemical, capsaicin, is unrelated to the toxic tropane and solanine alkaloids.

Capsaicin is found throughout the genus Capsicum, from which it gets its name. These spicy peppers are essential to many cultures’ modern cuisines. However, they are only native to the “New Word.” Their powerful flavors have led them to be quickly adopted for many dishes.

A Model of A Plant

Today, Solanaceae still plays an essential role in our society. In addition to being the family of many extremely popular foods, these plants are popular amongst scientists.

Tobacco and petunias are both used as “model organisms.” This means that many experiments are first tried on these plants. Because of their widespread cultivation, they are easily grown in repeatable ways. This makes them a good choice for answering basic questions about biology.