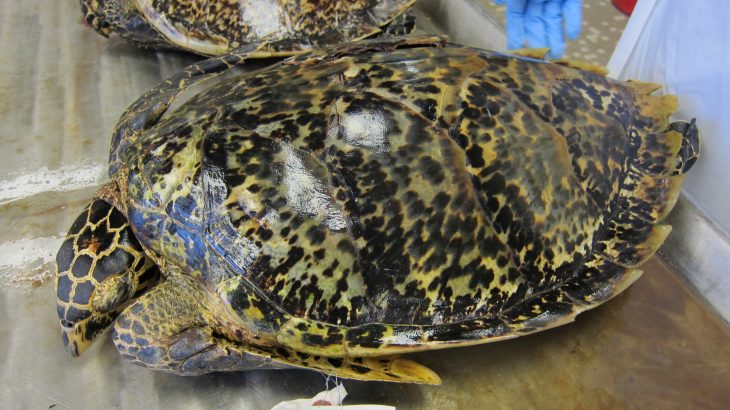 History of tortoiseshell trade sheds light on other illegal trafficking

The hawksbill sea turtle is known for its beautiful shell, which has been admired by animal-lovers and exploited by poachers for decades.

“The beauty of tortoiseshell has been the hawksbill’s curse,” says Dr. Emily Miller, an assistant research scientist at the Monterey Bay Aquarium and first author of a new study published in Science Advances. Her research involved analyzing 150 years of tortoiseshell trade records and using realistic harvest models to explore the trade of endangered hawksbill sea turtles.

Hawksbills are critically endangered, and are mainly being killed for their shells, which are used to make translucent, semi-precious material called tortoiseshell. This material has been carved into items such as sunglasses, bracelets, guitar picks, and combs.

Prior estimates of the global tortoiseshell trade relied on data that only went as far back as 1950, but scientists know that these turtles have been hunted for centuries. The team at the Monterey Bay Aquarium collected archival import records from dozens of countries going back to 1844 for this study. These new records showed that over half a million kilograms of tortoiseshell were traded before 1950. From this data, the authors estimated that this correlated to over 880,000 turtles killed.

The study found that roughly nine million turtles were harvested for shells over 150 years across a range that includes tropical Pacific, Atlantic, and Indian Ocean waters. These findings are more than six times previous estimates.

Miller used archival records to identify the top tortoiseshell exporters, finding a significant connection with modern IUU fishing patterns. Trade from Southeast Asia, Indonesia, Fiji, and Thailand combined to account for more than half of the historical exports.

“The fact that the tortoiseshell trade patterns and the IUU fishing patterns overlap so strongly suggests that social and economic factors are driving them,” Miller explains. “These drivers are issues of governance and longstanding trade relationships that form complex and opaque trade networks.”

By establishing the link between contemporary IUU fishing and long-standing tortoiseshell trade routes, this new research may be able to inform improved monitoring of other illegal trafficking of narcotics, guns, and humans. While the study has shed light on the illicit tortoiseshell trade, it has also shown how connected these activities are, and potentially given us a better idea of how to stop them.