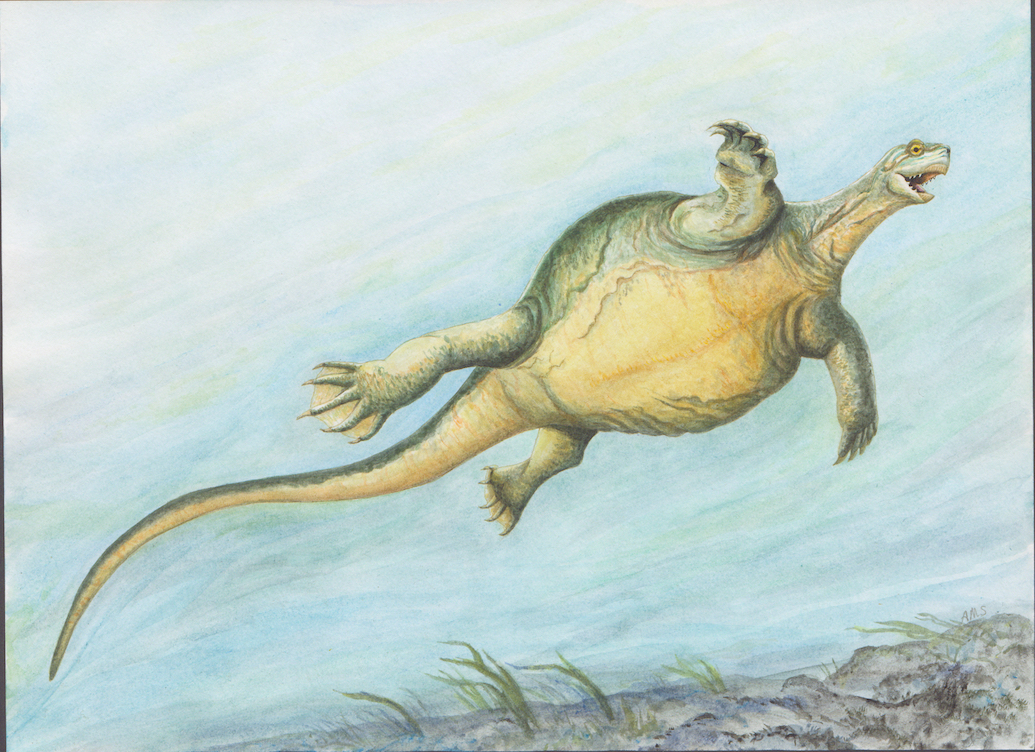 Fossil reveals how turtles developed a shell and toothless beak

Turtles are rather unique creatures, with their reptilian characteristics and their protective shell. Yet another distinguishing feature of the turtle is its toothless beak – and a newly-discovered fossil from 228 million years ago shines light on how turtles developed their signature traits.

The results were included in a report published in the journal Nature.

“This creature was over six feet long, it had a strange disc-like body and a long tail, and the anterior part of its jaws developed into this strange beak,” says Olivier Rieppel, a paleontologist at Chicago’s Field Museum and one of the report’s authors. “It probably lived in shallow water and dug in the mud for food.”

The paleontologists who discovered the fossil have named the new species Eorhynchochelys sinensis, which means “dawn beak turtle” – referring to it being the oldest turtle fossil to be found with a beak. Sinensis means “from China,” and is in reference to the place where the fossil was found by Li Chun, the lead author of the study and a researcher at China’s Institute of Vertebrate Paleontology and Paleoanthropology.

One of the more interesting aspects of this new species is that – while it’s body was wide and rib cage expansive – the species did not yet have a shell like the turtles we see today. But its discovery fits nicely into a missing piece in turtle lineage, as another early turtle species was discovered previously that had a partial shell, but no beak. “The origin of turtles has been an unsolved problem in paleontology for many decades,” says Rieppel. “Now with Eorhynchochelys, how turtles evolved has become a lot clearer.”

Mosaic evolution refers to the fact that traits can evolve independently of each other and at a different rate, and that not all ancestral species had the same combination of these traits. Eorhynchochelys developing a beak before other early turtles – while not having a shell – is evidence of mosaic evolution in this lineage. Some turtle relatives got partial shells, while others developed beaks, and over a long period of time, the genetic mutations that resulted in these traits occurred in the same animal.

Eorhynchochelys has even more to offer in the clarification of turtle ancestry. The skull of Eorhynchochelys helped solve the decades old debate as to whether turtle ancestors were part of the same reptile group as modern lizards and snakes – diapsids, which are known to have had two holes on the sides of their skulls early in their evolution – or if they were anapsids, which did not have these holes. The skull of the fossil Eorhynchochelys showed signs that it was a diapsid. “With Eorhynchochelys’s diapsid skull, we know that turtles are not related to the early anapsid reptiles, but are instead related to evolutionarily more advanced diapsid reptiles. This is cemented, the debate is over,” says Rieppel.

With all these observations, it’s clear that Eorhynchochelys was an important missing piece in the turtle family tree, and this discovery has changed the way that we think about the origin of the turtles we have today.