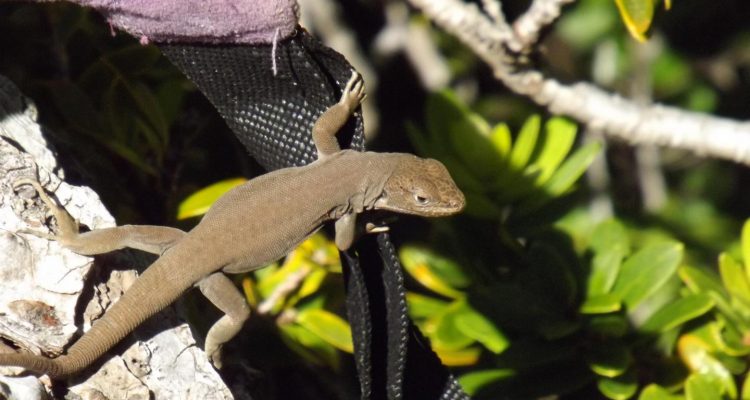 Two new lizard species have been discovered in the Chilean Andes.

Collected from areas of heroic past, both small reptiles were named after courages tribal chiefs who have once fought against colonial Spaniards in the Arauco war. The study, conducted by a team of Chilean scientists, is published in the open access journal ZooKeys.

Jaime Troncoso-Palacios from Universidad de Chile and his team found both new lizard species near a lake in a pre-Andean zone among deciduous vegetation. Following the examination of the collected specimens and further analysis of their mitochondrial DNA, performed by Dr. Alvaro A. Elorza from Universidad Andres Bello, Chile, the scientists concluded that they belong to species unknown to science.

One of the lizard species, called Liolaemus janequeoae, or, Janequeo`s Lizard, is distinct for being smaller than its relatives, measuring a maximum of roughly 7 centimeters at length, as well as having no pattern on its back. Both features are quite striking for the group of lizards it belongs to. The only contrasting coloration for the lizard species are several white scales appearing on the upper side in males. Otherwise, the lizard species are predominantly light brown with pearly whitish down side of the body.

In the local Lonko tribe’s history, Janequeo was a prominent chief, who lost her partner during the Arauco war, after he was caught and tortured to death by the colonial Spaniards. She is said to have had a leading role in the Battle of Fort Puchunqui. Coincidentally, the new lizard species was discovered where the war once took place, in the Araucanía Region.

The second new species, called Liolaemus leftrarui, or Leftraru`s Lizard, was collected from the same locality, hence it also received a heroic name honoured in the Arauco war. It is called after the most prominent Mapuche tribal chief. According to the stories, he was taken by the Kingdom of Chile’s Governor at the age of 11 to become his servant. There, however, he learned the military strategy of the Spanish, managed to escape and joined his people in the war. Later, not only did he kill his former master, but also won the most remarkable victories over the Spaniards.

The Leftraru`s Lizard is a large species of about 8 centimeters in length, characterised with absent precloacal pores, a common feature for its lizard group, save few. On the upper side of its body there are also unusual light blue dots. Overall, its colour is brown splashed with dark brown spots. Apart from the blue scattered scales on the back, there is also a bit of green on its head, limbs and tail. At the rear it becomes yellowish.

In conclusion, the authors note that the lizard fauna of Chile has been mistakenly assumed to be quite scarce up until recently. Yet, their latest discovery, along with several other new species, described in recent years, could be a clear sign that, “some populations under study could be described as new species in the future”.