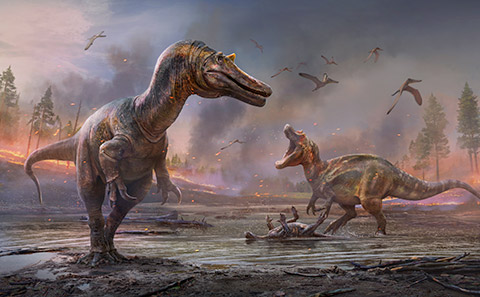 Two new predatory dinosaurs found on the Isle of Wight

A new study published in the journal Scientific Reports suggests that bones recently found on the Isle of Wight belong to two new species of spinosaurids, a type of predatory theropod dinosaurs closely related to the giant Spinosaurus. Scientists believe that these creatures’ huge crocodile-like skulls allowed them to hunt their prey both on land and in the water.

The only spinosaurid skeleton previously discovered in the UK was found in 1983 in Surrey and belongs to the genus Baryonyx. The newly discovered bones belong to different species, previously unknown to science.

“We found the skulls to differ not only from Baryonyx, but also one another, suggesting the UK housed a greater diversity of spinosaurids than previously thought,” reported lead study author Chris Barker, a doctoral student at the University of Southampton.

The first specimen has been named Ceratosuchops inferodios (“horned crocodile-faced hell heron”), and has a series of low horns in its brow region. As in the case of herons, this dinosaur probably had an eclectic hunting style and a flexible diet, feeding on both aquatic and terrestrial prey. The second one was named Riparovenator milnerae (“Milner’s riverbank hunter”) in the honor of late paleontologist Angela Milner, who had previously studied and named Baryonyx.

The discovery of these dinosaurs on the Isle of Wight was something scientists expected. “We’ve known for a couple of decades now that Baryonyx-like dinosaurs awaited discovered on the Isle of Wight, but finding the remains of two such animals in close succession was a huge surprise,” said study co-author Darren Naish, an expert in British theropod dinosaurs.

“It might sound odd to have two similar and closely related carnivores in an ecosystem, but this is actually very common for both dinosaurs and numerous living ecosystems,” added study co-author David Hone, a senior lecturer in Zoology at the Queen Mary University of London.

The scientists estimate that both dinosaurs measured around nine meters in length and had one meter-long ferocious skulls, perfectly evolved for catching and devouring a large variety of prey. With their large rivers housing a varied ecosystem, the Early Cretaceous rocks on the Isle of Wight provided dinosaurs with many hunting opportunities.

“This work has brought together universities, Dinosaur Isle museum and the public to reveal these amazing dinosaurs and the incredibly diverse ecology of the south coast of England 125 million years ago,” concluded project supervisor Dr. Neil J. Gostling.