The myth of an 'unpeopled' jungle • Earth.com 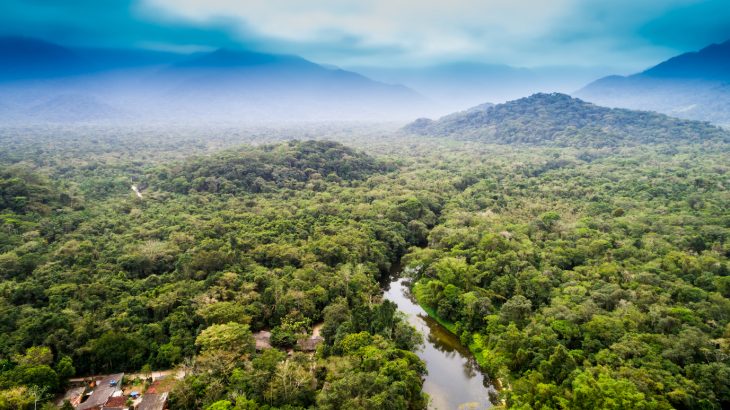 The myth of an ‘unpeopled’ jungle

When Europeans colonized new lands, they often did so by ignoring the rights of the people already living there. Ideas of manifest destiny, and the notion that Europeans had not only the right but were destined to inhabit foreign lands, were used to promote colonization of the Americas.  Along with the explicit idea of manifest destiny was the implicit idea that much of the land in the Americas went unused.

This idea is still widely accepted and even promoted by national parks and other institutions promoting wilderness preservation as divorced from human use.  This concept only holds up if prior to European occupation, the wild places of the Americas were mostly uninhabited and unused. An alternative notion is that these places were used in ways that left less scars obvious to European colonists by peoples with longer and deeper histories with American landscapes.  The method of denying the second possibility is usually simply to ignore it.

It was easy for European conquistadors and colonists to ignore the Native American population densities because they often never encountered them.  Despite the violent conflicts between Europeans and Native peoples, the majority of Native Americans were killed indirectly by European disease rather than by bullets or knives.

National Geographic reported in 2011 on genetic research that shows Native American populations at their all time lows only a few years after the arrival of Columbus.  Toribio de Benavente, a Franciscan missionary to Mexico, reported that smallpox killed over half the Native American population in most areas. After instances like these, the Americas were relatively uninhabited, because most of the original inhabitants were killed, leaving the land open to be stolen by colonists.  Many of the later colonists seemed to believe the lie of an uninhabited land, thinking little of the mark left behind by the Native Americans.

The Amazon basin of South America is a place that’s hard to imagine inhabited by large human populations, but that’s what conquistador Francisco de Orellana saw when he was the first European to descend the Amazon River.  Yale’s Global Forest Atlas reports that Orellana claimed to see numerous advanced tribes along the banks of the river, already in decline from European diseases.

Orellana’s reports were for a long time thought to be fantasy.  This might have been partly because Orellana also reported being attacked by (female) Amazon warriors with elaborate hairstyles.  Mainly though, it seems that Europeans were incapable of imagining groups of people colonizing in large densities land that Europeans themselves found inhospitable. Ideas of ‘green hell’ and ‘green paradise’ come from the paradox of tropical forests – places where the ignorant can easily starve but where the well-versed find an abundance.

Despite skepticism from many quarters, mainly those of anthropologists, Orellana’s claims only fueled the search for an El Dorado, a mythical, wealthy, and lost city in the jungle.  The Spanish conquistadors wanted to find such a city and raid it for gold and other resources, enslaving the inhabitants, much like they did throughout what is now Latin America.

Others that followed, like Colonel Percy Fawcett, were more interested in proving pet anthropology theories and a desire for discovery.  Fawcett himself was experienced in exploration of the Amazon region, spending years surveying for maps in South America, and well versed with encountering Native peoples.  Fawcett was known for bravery in the face of hostility by Natives, never returning it with attacks of his own. It was these experiences that lead Fawcett to the belief that a city could be supported and probably was hidden somewhere in the vast Amazon region.  Eventually, Fawcett disappeared in the jungle in 1925 before making good on his discovery and his final fate is unknown to this day. Despite Fawcett’s disappearance and the lack of Orellana’s credibility, it turns out both men were right about one thing – far from being inhospitable, the Amazon rainforest once supported humans in higher densities than most would find credible.

Research from the early 2000s showed that there was more obvious signs of large scale development in the Amazon region visible from the air than had ever been previously reported.  A paper from the University of Pennsylvania describes the remains of elaborate weirs used for large scale fish farming.  A 2017 report in Nature shows that in the Amazon region, domesticated trees and palms are five times more likely to be over represented than wild trees.

In the end, the research showed that this distribution of useful plants was caused by a mix of factors.  20% of the domesticated tree distribution seems to be directly from human influence. In the southwestern region of the Amazon, an area with larger pre columbian populations, 30% of the domesticated trees were due to human activity.  These two things together show that humans played a dynamic and active role in the Amazon region.

As we reported in March 2018, archaeologists found 81 ancient settlements in the Amazon.  The discovery was first made not by an archaeologist wielding a machete through dense jungle, but by a retired financial planner browsing free online satellite images.  The images were confirmed by scientists on the ground to be large earthworks, the remains of what appear to be part of extensive agricultural communities. This discovery suggests that as many as a million people may have occupied the Amazon region before 1500 and the arrival of European disease.

This all fits nicely with new research we reported on last month that shows signs of people living in southwestern Amazon long before the development of complex societies.  Hunter gatherers were living in the region and making fires the remains of which are dated to 10,000-4,000 years old. It appears that far from being a green wasteland, the Amazon region has long supported people and even the development of complex societies.

With the staggering beauty and biodiversity left behind after the collapse of societies in the Amazon, many questions are raised.  As we rush against our own destructive tendencies to create sustainable cities to live in, perhaps the answer has been hiding in the green maze of the Amazon this whole time.