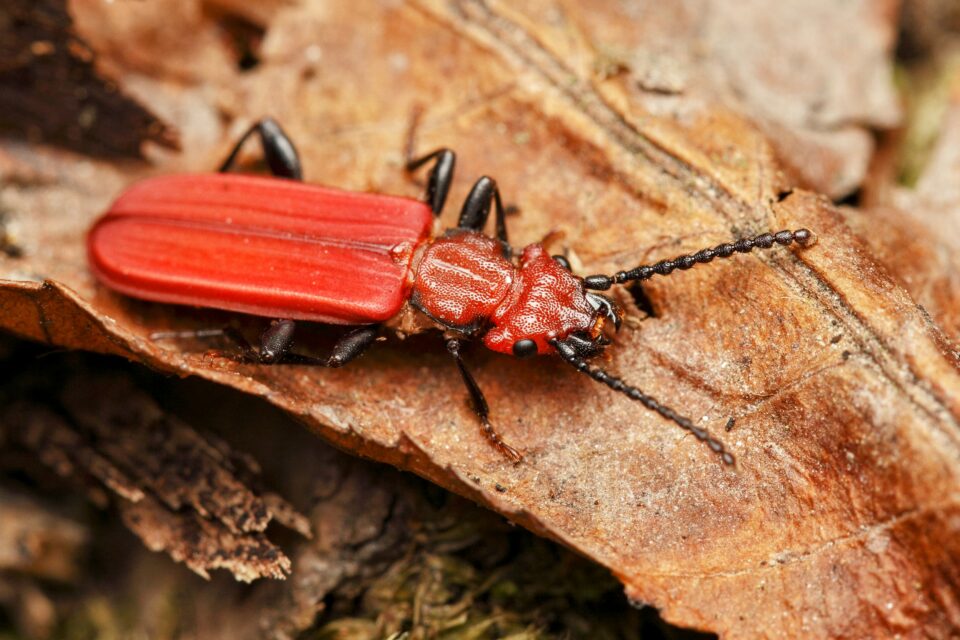 There are a few species of beetles that can jump, but beetle larvae tend to squirm across the substratum and have never been seen doing acrobatic jumps — until now.

A team of researchers has published a scientific article documenting the jumping behavior of larval lined flat bark beetles (Laemophloeus biguttatus). This type of locomotion has not been recorded for beetle larvae before.

The larvae are able to spring into the air with a speed of around 0.5 meters per second, and to travel forwards a distance approximately equivalent to four times their own body length. While flying through the air, the larva curls itself into a loop and as it lands, it bounces and rolls along until it becomes stationary.

“Jumping at all is exceedingly rare in the larvae of beetle species, and the mechanism they use to execute their leaps is – as far as we can tell – previously unrecorded in any insect larvae,” said study co-author Matt Bertone, director of North Carolina State University’s Plant Disease and Insect Clinic.

“The way these larvae were jumping was impressive at first, but we didn’t immediately understand how unique it was,” said Bertone. “We then shared it with a number of beetle experts around the country, and none of them had seen the jumping behavior before. That’s when we realized we needed to take a closer look at just how the larvae was doing what it was doing.”

Usually when insects make impressive jumps, they rely on a “latch-mediated spring actuation mechanism.” This means that two parts of the body latch onto each other while the insect exerts force using its muscles. When this builds up a significant amount of potential energy, the insect unlatches the two parts and all the stored energy is released at once. This results in an action-packed spring off the ground.

The researchers looked for a two-part latch mechanism on the surface of the lined flat bark beetle larvae and found nothing. Then, they used microCT scans to measure how much muscle the beetle larvae had and calculated whether this would provide enough power to launch the larvae into the air at a speed of 0.5 meters per second. The larvae did not have enough muscle to achieve this by muscle action alone.

The conclusion was that the larvae must be using some form of spring-loaded system to achieve their acrobatic jumps. This is when Bertone and study co-author Adrian Smith decided to film the behavior in order to get a better understanding of what was taking place. Smith is a research assistant professor of biological sciences at NC State and head of the Evolutionary Biology & Behavior Research Lab at the North Carolina Museum of Natural Sciences.

The team filmed some jumps at 60,000 frames per second and were able to see that the beetle larvae actually hook their feet into the ground as they arch their bodies and prepare to jump. As soon as one foot loses its grip on the ground, the spring is released and the larva is propelled into the air under the power of its body’s own potential energy store.

Meanwhile, in an unrelated video about jumping maggots, Smith had included a short clip of the jumping behavior in L. biguttatus. That video was seen by Takahiro Yoshida, a researcher from Tokyo Metropolitan University in Japan, who had witnessed similar jumps in the larvae of another beetle species called Placonotus testaceus, but had not published anything related to the behavior. Yoshida is a co-author on the publication about this unusual form of locomotion.

“We don’t have high-speed footage of P. testaceus, but the video evidence we do have from Yoshida’s lab suggests that this previously unknown behavior is found in two different genera which are not even closely related,” said Bertone.

“This raises a lot of questions. Has this behavior evolved separately? Is it found in other beetle species? Are these genera more closely related than we previously suspected? There’s a lot of interesting work to be done here.”

Details of this unusual method of locomotion in lined flat bark beetle larvae are published today in the journal PLOS ONE.