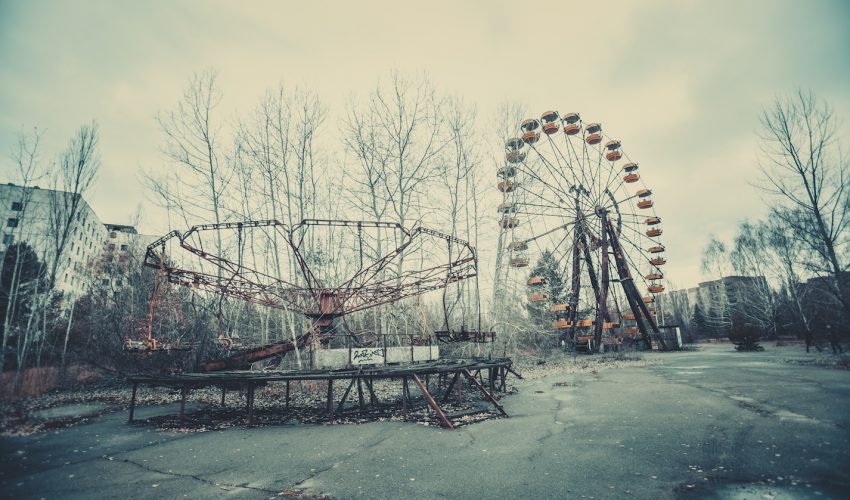 Our planet contains countless breathtaking and unforgettable places to explore. This is not among them. Yes, it’s true. You can book a trip to Chernobyl. No, not to the actual reactor. That would be crazy. But you can explore just about everything short of the Chernobyl Sarcophagus, which is about as ominous as it sounds. That’s the massive steel and concrete structure that “temporarily” encases the damaged reactor while a more permanent confinement shelter is in the works.

As for Pripyat and the rest of what’s called the Chernobyl Exclusion Zone or the Zone of Alienation, well, it’s not so alienating anymore. The website for Chernobyl Tour sums it up best, though in a bit of an understatement: “Radiation makes the zone particularly interesting.”

Not that you and the family have a thing to worry about, Chernobyl Tour assures. Stay for a day or two and…no problem. The tour group promise couldn’t be more reassuring: “Of course, the Zone in its central part still has places with elevated radiation, and we definitely would NOT recommend you staying at them for a long time. However, if you follow the suggested route and the guides’ directions, your visit to the Chernobyl zone will be absolutely radiation-safe.”

This, of course, is despite the website’s stated theme for the tour: “Eye-opening experience of post-Apocalyptic world.”

But let’s step back for a moment for a brief history lesson.

On the evening of April 26, 1986, Chernobyl, a Soviet-style nuclear power plant, experienced the world’s first Level 7 meltdown of a nuclear reactor. The second such nuclear catastrophe occurred to the Fukushima Daiichi plant in Japan in 2011, as the result of a devastating earthquake and tsunami.

The Chernobyl plant was – and is – located less than two miles from Pripyat, which was, at the time a thriving city of nearly 50,000 people. Two workers were killed immediately and nearly 30 other firefighters and workers lost their lives to radiation exposure in the days and months that followed. Not that the world learned of this cataclysmic event as it happened. Ukraine was part of the Soviet Union at the time, and authorities tried to keep it quiet. They sealed the damaged reactor in its sarcophagus and evacuated the surrounding cities and villages.

Ukrainian authorities insist that, after 30 years of evacuation, the radiation levels are low enough that tourists can explore the two towns, settlements and villages that comprise the Zone of Alienation. You can see tens of thousands of abandoned homes and other structures, and more than 10,000 tourists a year take up the offer. The once bustling Pripyat is the largest of the ghost towns, and a popular destination for apocalyptical-minded sightseers – especially the abandoned amusement park with its landmark Ferris wheel.

The Chernobyl Tour is a property of Ukraine’s Ministry of Economic Development and Trade, so it’s fully endorsed by the nation. There are significant explanations of health issues on the website, and an insistence that the stay of even a day or two is safe. In fact, some 200 people, including children, live in the Zone illegally. This 2012 Vice article explains that many of those children are seriously ill.

The photographers and extreme-sport version of tourists who visit can tell their friends they survived Chernobyl. What remains to be seen is whether they can still make that claim in 20 or 30 years.