Vaquita porpoises may have a good chance at recovery • Earth.com 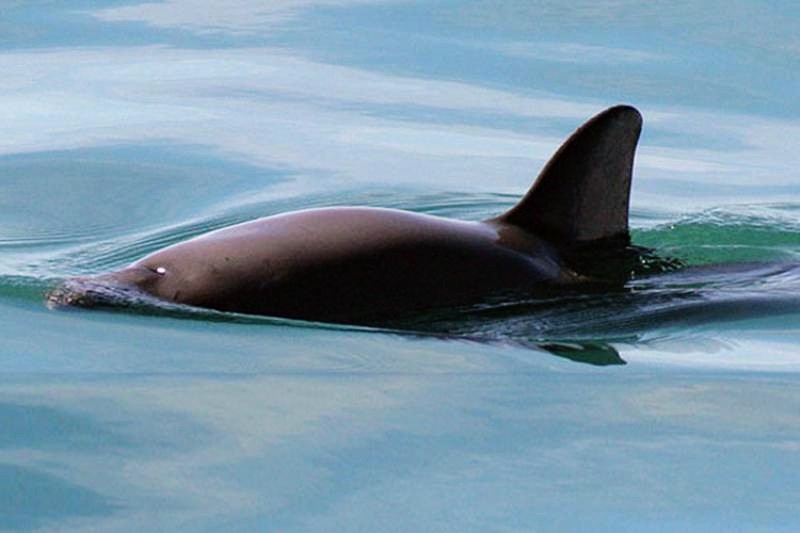 Vaquita porpoises may have a good chance at recovery

The vaquita porpoise is one of only seven different porpoise species in the entire world – and its population is critically endangered. The species is endemic to the northern end of the Gulf of California in Baja California, Mexico, and is unusual in that it is the smallest of all cetacean species and the only member of the porpoise family to live in warm waters. Tragically, there are only 10 vaquita porpoises left.

This small marine mammal, which only reaches four to five feet in length, has been the unfortunate bycatch of poachers hunting the totoaba (Totoaba macdonaldi), an endangered fish species that is highly prized in some countries for its perceived medicinal properties.  Vaquitas are roughly the same size as the large totoaba that are illegally targeted using gillnets, and the porpoises easily become entangled in the nets and then drown.

Fishing for totoaba has been outlawed in Mexico since 1975 but the ban has not been adequately enforced. The swim bladder of a totoaba is perceived in China as having medicinal and nutritional properties and is in such demand that the prices have become sky high. In fact, dried maw (swim bladder) from totoaba often fetches higher prices per kilogram than cocaine or gold. Despite the fact that the trade in totoaba is banned by CITES, the value of the maws makes them sought-after by poachers and so the illegal fishing and trade continues. Vaquitas are simply collateral damage in this situation.

A recent genetic analysis of vaquitas by a team of UCLA biologists and colleagues has, however, given a ray of hope for this critically endangered species. The experts analyzed the genomes from tissue of 20 vaquitas that lived between 1985 and 2017 and assessed the range of genetic variation present in the genomes. Using this information, they conducted computational simulations to predict the species’ risk of extinction over the next 50 years.

The results, published today in the journal Science, indicate that the species still has a relatively high genetic diversity and a low incidence of harmful mutations, despite the effects of inbreeding. The researchers say that this gives the living population a good chance of recovery, as long as gillnet fishing ends immediately.  If the threat of gillnets continues, however, the prospects of population recovery are very dim indeed.

“Interestingly, we found the vaquita is not doomed by genetic factors, like harmful mutations, that tend to affect many other species whose gene pool has diminished to a similar point,” said study co-lead author Christopher Kyriazis. “Outlawed fishing remains their biggest threat.”

Genetic diversity is a measure of the differences in genes that exist between individuals in a population. The accepted understanding is that the greater the genetic diversity present in a population, the healthier that population is. Large populations tend to have many differences, while naturally smaller or reduced ones have fewer, resulting in individuals that are more genetically similar. Breeding between genetically similar individuals (known as inbreeding) increases the chances of offspring with harmful genetic mutations, as mutated genes can be passed on by both parents.

“A prevailing view in conservation biology and population genetics is that small populations can accumulate deleterious mutations,” said senior author Professor Kirk Lohmueller. “However, our finding that the vaquita likely has fewer strongly deleterious mutations hiding in the population means that they are better poised to survive future inbreeding, which bodes well for their overall recovery.”

“Relative to other species, the vaquita has a higher chance of rebounding from an extreme population crash without suffering severe genetic consequences from inbreeding,” said co-lead author Jacqueline Robinson. “Genetic diversity in vaquitas is not so low that it constitutes a threat to their health and persistence. It simply reflects their natural rarity.”

The fact that vaquitas have always been rare is what seems to protect them from the harmful effects of inbreeding. Although their historic numbers are not known, a comprehensive survey in 1997 counted 570 porpoises in their only known habitat, the Gulf of California. This means that some extent of inbreeding has probably been taking place for a long time and the harmful mutations have gradually been selected out of the population.

“They’re essentially the marine equivalent of an island species,” said Robinson, who noted that the species has survived for tens of thousands of years with low genetic diversity due to the small size of their population. “The vaquitas’ naturally low abundance has allowed them to gradually purge highly deleterious recessive gene variants that might negatively affect their health under inbreeding.”

In fact, Robinson said, of the 12 marine mammal species that the researchers analyzed genetically, vaquitas had the lowest number of potentially harmful mutations. This situation gives hope that the population of these porpoises may be able to rebound from the precipice of extinction, given the chance.

Encouragingly, the surviving vaquitas in the northern Gulf of California are actively reproducing and appear healthy. But poachers’ gillnets continue to pose an existential threat to them, and unless further measures are taken to protect the porpoises, there is a distinct possibility they may go extinct. The loss would be a great tragedy, said study senior author Professor Robert Wayne.

“The vaquita is symbolic of the unique diversity found in the Gulf of California, which was described by John Steinbeck in his wonderful 1951 book ‘The Log from the Sea of Cortez,’” said Wayne. “It represents a unique evolutionary lineage – there is no similar species anywhere in the world – and its loss would rob the ecosystem of an important predator adapted to this unique ecosystem.”