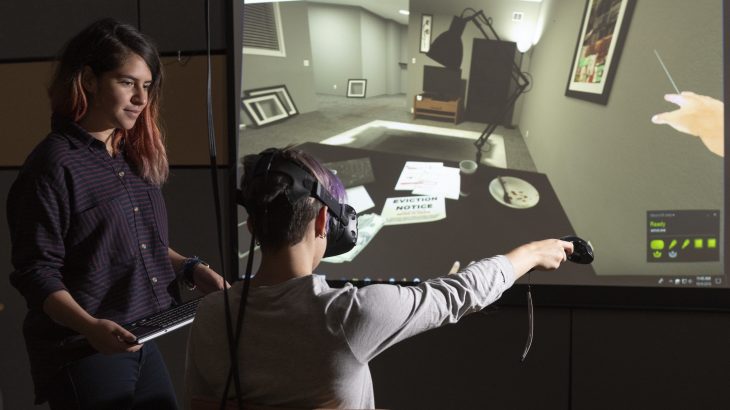 Published in PLOS ONE, the study used VR to lead participants through the experience of becoming homeless, showing different scenarios one might experience in the process. They compared empathy levels of those who did the VR experience to participants who were shown other media versions of the VR scenario, such as text.

“Experiences are what define us as humans, so it’s not surprising that an intense experience in VR is more impactful than imagining something,” says Jeremy Bailenson, a professor of communication and a co-author of the paper.

Previous research exploring how VR affects empathy has produced varying results, and most studies used small sample sizes made up of primarily college students. Furthermore, few studies have examined the long-term effects of VR on empathy.

For their study, the researchers conducted two-month-long trials with over 560 participants of varying ages and ethnic backgrounds. Some participants in the study were shown the VR experience “Becoming Homeless,” in which they are led through multiple interactive scenarios of what would happen if they lost their jobs. Scenes range from looking around an apartment to find items to sell to pay for rent, to sheltering on a public bus and protecting their belongings from being stolen by a stranger.

“Taking the perspective of others in VR produces more empathy and prosocial behaviors in people immediately after going through the experience and over time in comparison to just imagining what it would be like to be in someone else’s shoes,” says lead author Fernanda Herrera, a graduate student in the Department of Communication at Stanford. “And that is an exciting finding.”

These findings show that VR can be used for much more than just personal entertainment.

“What’s special about this research is that it gives us longitudinal evidence that VR changes attitudes and behaviors of people in a positive way,” explains Bailenson.

The impact that “Becoming Homeless” had on some members of the study didn’t go away once the research was completed. “Long after our studies were complete, some research participants emailed me to reflect on how they started becoming more involved in the issue afterward,” says Herrara. “One of them befriended a homeless person in their community and wrote me again once that person found a home. It was really inspiring to see that positive, lasting impact.”