Volcanic eruptions can cause ice sheets to suddenly melt • Earth.com 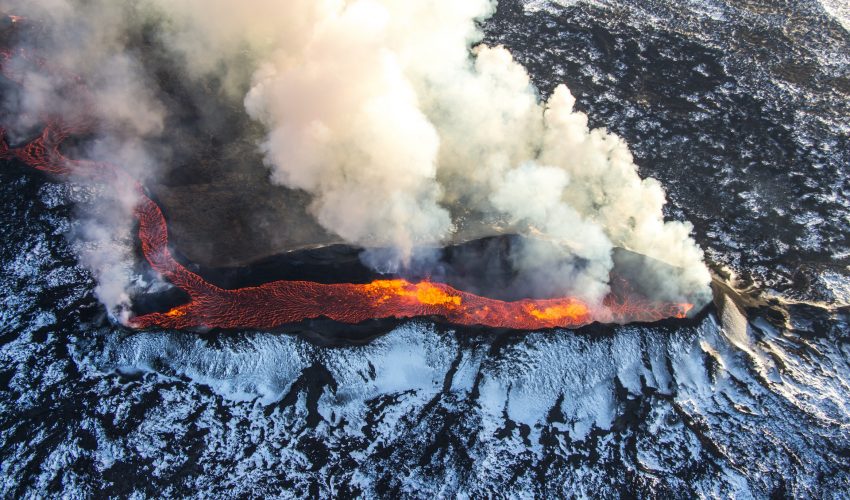 Volcanic eruptions can cause ice sheets to suddenly melt

Scientists have now found a direct link between volcanic activity and melting ice sheets. Researchers from The Earth Institute at Columbia University examined the environmental impact of ancient eruption events and found that they caused significant melting of the ice sheet which covered Northern Europe during the last ice age.

“Over a time span of 1,000 years, we found that volcanic eruptions generally correspond with enhanced ice sheet melting within a year or so,” said lead author Francesco Muschitiello.

The researchers analyzed ice cores and meltwater deposits from times that coincided with volcano explosions. Despite the fact these eruptions were occurring as far as a thousand miles away, the ice sheets were still impacted by ash falling from from the sky. The ash turned the ice a darker color on contact, which caused the ice to absorb more solar heat than usual.

“We know that if you have darker ice, you decrease the reflectance and it melts more quickly. It’s basic science,” said Muschitiello. “But no one so far has been able to demonstrate this direct link between volcanism and ice melting when it comes to ancient climates.”

Muschitiello’s team investigated a time period ranging from 13,200 to 12,000 years ago, when the last ice age transitioned into today’s climate. They focused on eruption events similar to the 2010 eruption of Iceland’s Eyjafjallajökull volcano. While the eruption itself was relatively minor, its massive ash cloud was severe enough to shut down air traffic across Europe for almost a week.

Glaciologist and study co-author James Lea said it is difficult to calculate exactly how much melting a volcanic eruption of that magnitude could cause. “It depends on many factors,” he said.

Thousands of model simulations produced by the team revealed that the amount of glacier melting depends on the individual eruption, which season it occurs in, the snowpack conditions at the time, and the elevation of the ice sheet.

“Change any one of these and you would get different amounts of melt,” said Lea.

The worst scenarios predicted that ash accumulation would melt between 20 centimeters and nearly a meter of ice from surface portions of the ice sheet. Muschitiello said that these preliminary findings indicate that “present day ice sheets are potentially very vulnerable to volcanic eruptions.”

Previous research has suggested that melting glacier sheets could actually increase the frequency of volcanic eruptions by lightening the weight on Earth’s crust and allowing magma to rise. If this link between volcanic activity and melting ice is confirmed, there may be a positive feedback loop between the two, by which eruption events trigger melting ice and the melting ice causes more eruptions.

The study is published today in the journal Nature Communications.