Which volcanoes are most likely to erupt next? • Earth.com 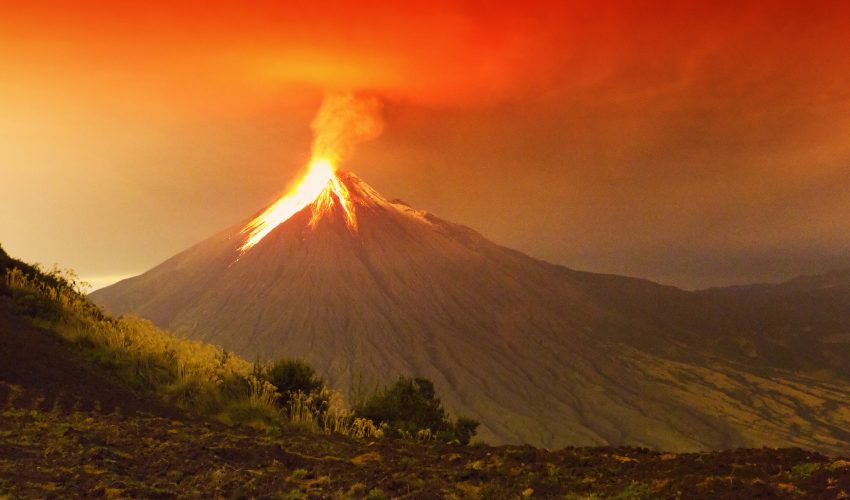 Which volcanoes are most likely to erupt next?

With North Korea claiming to have missiles that can reach Alaska, disaster movie scenarios have crept into the minds of many Americans. This isn’t the first time Alaska has been the locale for potential disaster. In 2008, the 49th State on the northwest extremity of North America saw two of the state’s 40 plus active volcanoes erupt in the southwestern Aleutian Islands. Neither Kasatochi Volcano or Mount Okmok’s eruptions were disastrous, but they did get us thinking… Might some natural disaster take us out before a foreign missile? When was the last time a volcano did some real damage in the United States?

In 1980, Mount St. Helens in Washington state erupted and caused 57 casualties, making it the deadliest and most costly volcano in US history. In 1989, Mount Redoubt in… you guessed it, Alaska, sent volcanic ash 45, 000 feet into the sky, causing all four engines on a Boeing 747 to fail and send the airplane plummeting toward the earth, until the pilots managed to get the engines restarted. Then in 2009, the same volcano went off from March to July. Fortunately, no planes fell from the sky that time and volcanoes on the North American continent have been relatively quiet since.

Mauna Loa in Hawaii, considered to be the largest volcano on earth having emerged above sea level some 400, ooo years ago, experienced its last eruption from March to April of 1984. Benjamin Edwards, Associate Professor of Geology at Dickinson College in Pennsylvania predicted in 2014 that Mauna Loa was one of the volcanoes most likely to erupt next. “It can produce pretty big lava flows that travel quickly, so there’s certainly some danger to the people on the Big Island of Hawaii. It’s such a famous volcano that there would be people from all around the world trying to go see it because it’s so well known for having such a large outpouring of lava when it erupts.”

In addition to Alaska and Hawaii, Russell McLendon lists the Cascade Range of mountains sprawling from Southern British Columbia to Northern California on the list of US volcanoes likely to erupt soon. “They aren’t as active as Alaska’s volcanoes, but they’ve caused the most powerful eruptions on U.S. soil, and they’re dangerously close to large population centers in California and the Pacific Northwest.”

There are also many theories about volcanoes outside the US that should be closely observed. Included on that list is Campi Flegrei (Italian for burning fields) in Italy, a volcano that one study suggests wiped out the Neanderthals 40, 000 years ago. Also along the Campanian Arc lies Mount Vesuvius, the only active volcano on the European mainland. Vesuvius is considered one of the most dangerous volcanoes in the world because of its proximity to the neighboring city of Naples, but hasn’t had a major eruption since 1944.

Iceland is also lousy with volcanoes. In 2010, a volcano went off sending plumes of ash into the sky, grounding 100, 000 European flights and resulting in losses estimated at 4 billion euros. Edwards said of Hekla, a stratovolcano in the south of Iceland, “The bigger volcanoes often give you a few weeks of warning or more–you start to get earthquake swarms, you start to get different gases. If it’s an ice-covered volcano, sometimes you see melting early on as magma starts to move. But with Hekla, it’s not unheard of for there to be only a few hours between the first signs of unrest and an eruption.” Hekla is historically more likely to produce flowing lava than do something more explosive, which is fortunate given its popularity as a hiking destination.

Of course, with something like 1,300 potentially active volcanoes worldwide, it’s impossible to predict when and where the next volcano will erupt. But just to be safe, we’ll keep an eye on Alaska.