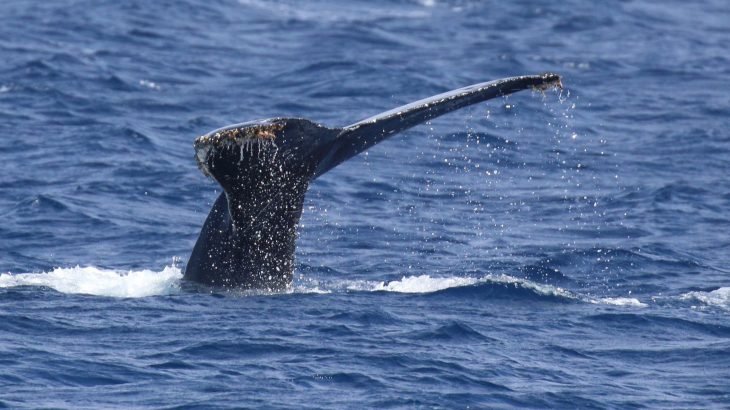 Humpback whales quiet their songs when they hear shipping noise

Whales may be some of the most vocal of the ocean’s inhabitants and their clicks, whistles, and pulsing calls can be heard for miles because sound travels faster underwater than in the air.

Researchers are still not sure the purpose of certain whale calls, like the famous whale songs of male humpback whales. But clicks and pulsing calls are used to communicate with fellow pod mates and identify what’s around, according to the National Oceanic and Atmospheric Administration.

Unfortunately, human shipping activity is creating an increase in low-frequency ocean noise which is how baleen whales communicate.

Researchers from the Ogasawara Whale Watching Association and Hokkaido University conducted a study to examine the impacts of noise pollution from shipping traffic on male humpback whale songs.

Two underwater recorders were used to capture the whale songs of humpback whales living around the Ogasawara Islands in Japan.

The researchers recorded 26 singing whales and shipping traffic activity between February and May of 2017.

The team observed that after a ship passed, whales nearby reduced their singing or stopped singing altogether for at least 30 minutes before resuming their songs.

There were also fewer male humpback whales who sang within 500 meters of a shipping lane.

“Humpback whales seemed to stop singing temporarily rather than modifying sound characteristics of their song under the noise, generated by a passenger-cargo liner,” the authors wrote in their study. “Ceasing vocalization and moving away could be cost-effective adaptations to the fast-moving noise source.”

The study further highlights the dangers of noise pollution in the ocean as it impacts whale behaviors and can harm marine wildlife.