Why tigers have stripes • Earth.com 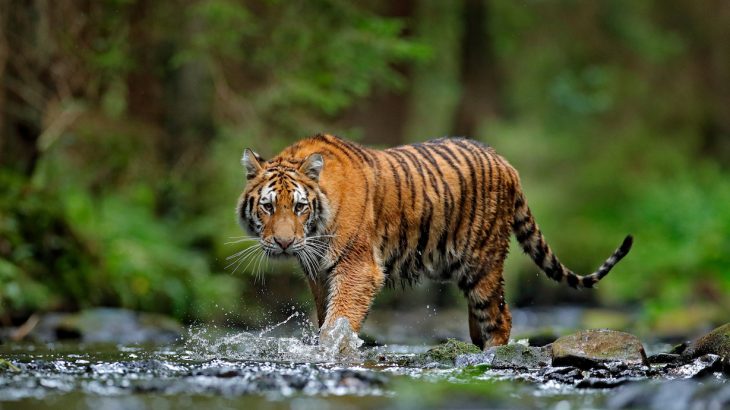 Why tigers have stripes

The coats, colors, feathers, and stripes we see in the animal kingdom often evolved to play a specific role such as providing convenient camouflage to hide from predators or prey or attracting mates.

When it comes to the bright orange and black stripes of a tiger, researchers have long wondered why tigers have such seemingly obvious coat colors. In the jungle forests, an orange tiger is easy to spot, at least to human eyes.

In a new study, researchers from the University of Bristol found that to colorblind prey, a tiger’s stripes help it blend into the green background.

The research was published in the Journal of the Royal Society Interface.

The researchers used computer simulations and image processing techniques to see how detectable a species is in its natural environment to other native animals in the same habitat.

Using computer image processing allowed the researchers to see which colors are best suited for camouflage and which ones stand out. This approach was applied to two environments, a temperate forest, and a semi-arid desert.

Simulating an environment through the eyes of an animal can help researchers better understand why certain coat colors evolved the way they did and which colors are optimal for camouflage.

To the trichromat eye, vision that can process red, blue and green colors, tigers appear orange. Deer, on the other hand, are only able to process blue and green and therefore are colorblind.

This means that to a deer, a tiger blends into the background seamlessly, the researchers’ imaging processing showed.

“Consider the coat of a tiger (Felis tigris); it has fur that appears orange to a trichromat observer rather than some shade of green, though the latter should be more appropriate camouflage for an ambush hunter in forests,” Dr. John Fennel, the lead author of the study wrote. “However, as illustrated, when viewed as a dichromat, the tiger’s colour is very effective.”

Next, the researchers asked participants to spot a red object in an image made to simulate three-color vision and two-color vision.

Participants had a much easier time spotting the red object in the three-color image.

The research provides a plausible answer to why tigers evolved to have such conspicuous coloring, to their colorblind prey it’s the perfect disguise.