Wildlife and livestock coexistence can work and benefit both sides • Earth.com 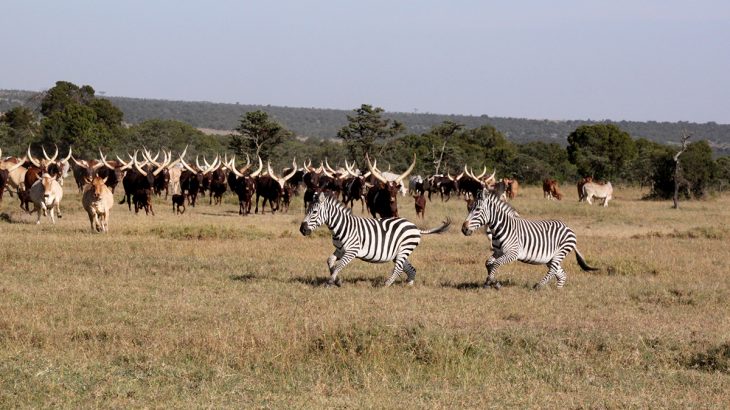 Wildlife and livestock coexistence can work and benefit both sides

A new study shows livestock and wildlife coexisting together could benefit all animals, as opposed to keeping wildlife areas strictly removed from human activities.

Many concerns come with wildlife coexistence, including the potential strain on resources, giving natural predators an abundant source of prey, and degrading natural habitats.

Coexistence also increases the risk of tick-borne diseases, that are easily spread between animals.

However, a new study has found that allowing livestock and wildlife to commingle under the right circumstances can have a positive impact.

Researchers from the University of Illinois at Urbana-Champaign recently surveyed wildlife coexistence on privately owned land in Laikipia County in Central Kenya.

“Laikipia County hosts 10 percent of Kenya’s wildlife, but none of the country’s national parks or preserves,” said Brian Allan, an author of the study published in the journal Nature Sustainability. “Most people depend on livestock for income and almost 70 percent of the land is devoted to large-scale ranching or pastoralism.”

In Laikipia County, the pressure to meet increasing food demands with agricultural expansion has resulted in farmers expanding into grasslands dominated by wildlife.

Some landowners in the area are also taking advantage of wildlife tourism as a secondary source of revenue because the area is home to a diverse array of animals like white and black rhinoceroses.

Laikipia County represents a unique research opportunity to examine the prevalence of tick-borne diseases that can spread between animals, and better understand how wildlife coexistence impacts both wildlife and livestock in the region.

“There is no greater diversity of tick species anywhere on the earth than in eastern and southern Africa,” said Allan. “And many of the ticks are host generalists, meaning they’ll happily feed on a cow, a gazelle or a zebra – and they’ll also bite humans.”

The researchers surveyed tick abundance, vegetations, and dung on 23 properties in Laikipia County in 2014 and 2015.

After identifying the ticks in the area, the researchers sequenced the DNA of tick-borne pathogens and talked with the managers and owners of each of the 23 properties about how much revenue wildlife tourism generated versus the income gained from their livestock.

Between areas that had wildlife and livestock coexistence compared to properties that only had livestock, the researchers didn’t find any difference in the number of ticks carrying disease. Tick abundance was also 75 percent lower on integrated properties.

Landowners reduced the spread of tick-borne disease by spraying cattle with acaricides that killed ticks but didn’t harm other animals.

“Reducing the number of ticks is one key part of a strategy to reduce the transmission of tick-borne diseases,” said Keesing. “These diseases can sicken and kill people, livestock and wildlife, which is particularly devastating in a vulnerable ecosystem experiencing many competing demands.”

The results of the study suggest that wildlife coexistence can be beneficial when managed properly and provides hope for wildlife conservation.

“It has been the attitude of conservationists that conservation lands must be kept secure and undisturbed from human uses, including livestock production, and I can sympathize with that perspective,” said Allan. “But our data are starting to suggest that there could be circumstances where livestock-wildlife integration can work – for the benefit of all. A productive savanna ecosystem may be the perfect place to try it.”