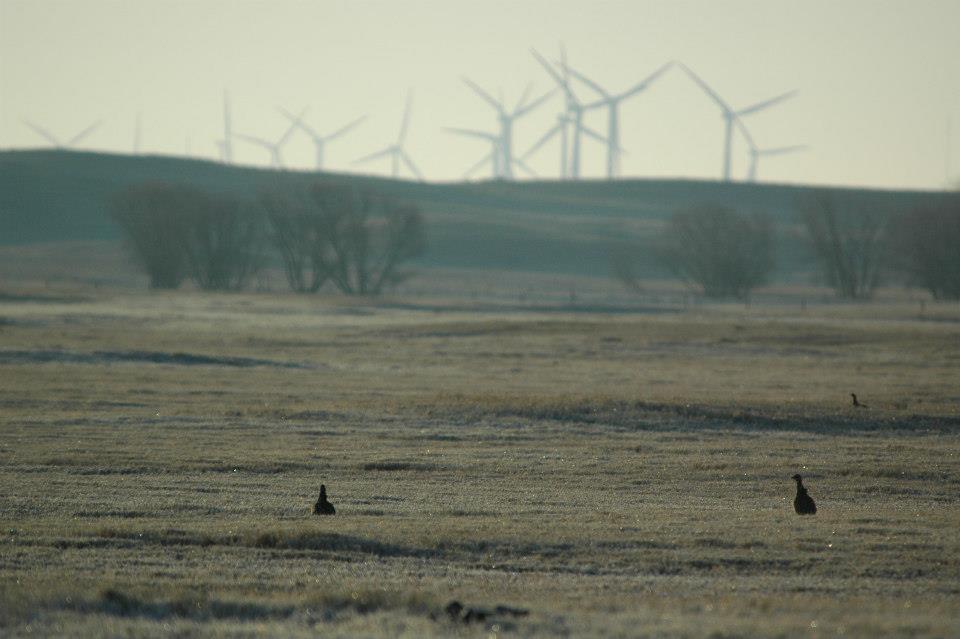 The Greater Prairie-chicken was once a common bird in North America, but like many endangered grassland birds, they are becoming more and more of a rarity. Today only small pockets of Greater Prairie-chickens exist in the plains and parts of the Midwest. And recently, there has been a growing concern that wind energy farms might add to the growing list of threats facing the endangered birds.

Wind energy, especially in the Great Plains, is increasing in popularity, and wind energy facilities are popping up all over the place to create a bountiful source of renewable, clean energy.

A new study published in The Condor: Ornithological Applications, led by Jocelyn Olney Harrison from the University of Nebraska-Lincoln in conjunction with her colleagues, finds that wind energy facilities in Nebraska have little to no effect on the Greater Prairie-Chicken nesting grounds.

The research team studied nesting sites near a small wind energy facility and captured 78 female prairie chickens from different breeding areas spaced at different locations across the facility. They fitted the birds with transmitters and monitored their nests and movements.

The team discovered that no matter how close a nest was to the wind energy facility, it seemed to have no effect on the bird’s mating and habits overall. Instead, the scientists found that the greatest threats were infrastructure and grazing patterns of animals.

“We suggest that livestock grazing and other grassland management practices still have the most important regional effects on Greater Prairie-Chickens, but we caution future planners to account for potential negative effects of roads on nest site placement,” said Harrison.

Further studies will need to be done with a larger scope to see if wind energy facilities have a significant impact on all grassland birds. But the promising findings of this project show that wind energy is not as great a threat as other current practices that lead to habitat loss.