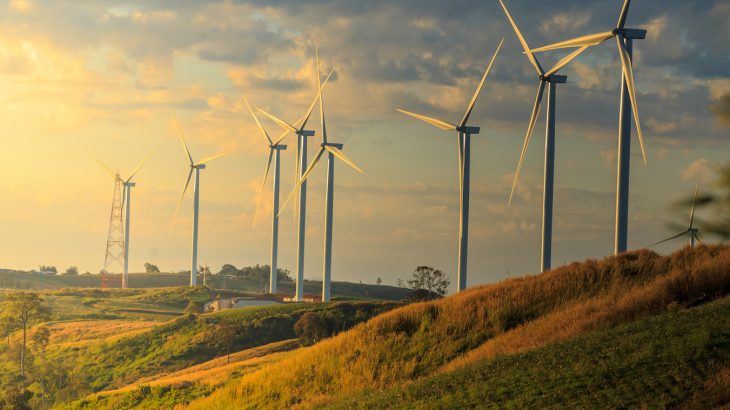 When a wind farm’s turbines all face directly into the wind, it reduces efficiency and slows the energy generated from turbines.

The wind turbines act like a speed boat navigating through choppy waters, and the wake created from oncoming wind slows down turbines further back.

Researchers from Stanford University have now discovered a better way to maximize wind farm efficiency and energy output without sacrificing turbines in the process.

The team found that pointing turbines in a different direction and not having them face the wind, a method called wake-steering, it prevents interference and ensures that all turbines are operating at their maximum speeds.

A turbine wake can reduce downwind generators by more than 40 percent.

“To meet global targets for renewable energy generation, we need to find ways to generate a lot more energy from existing wind farms,” said John Dabiri, the senior author of the paper. “The traditional focus has been on the performance of individual turbines in a wind farm, but we need to instead start thinking about the farm as a whole, and not just as the sum of its parts.”

The researchers developed a way to calculate and test misalignment of wind turbines and tried out these methods on a wind farm in Alberta for ten days.

“Through wake steering, the front turbine produced less power as we expected,” said Michael Howland, lead author on the study. “But we found that because of decreased wake effects, the downstream turbines generated significantly more power.

The new method also decreased variability for the wind farm, meaning it reduced the farm’s dependence on other energy sources when wind speeds were too low for the turbines to operate.

One of the struggles faced by wind farms is the need to match the amount of electricity supplied to a region to keep the grid reliable. If turbine wake suddenly decreases energy output for a short period, it may not be enough time to fire up a generator to match output and energy is lost.

With wake steering, the variability of power sources was cut by 72 percent.

The researchers also found that their method decreased operating costs by eliminating the need for frequent and costly repairs.

While the researchers were able to test their strategy in a field setting for ten days, the model they developed can be used by farms in different locations to see if misalignment might help improve efficiency and lower variability.

“Our model is essentially plug-and-play because it can use the site-specific data on wind farm performance,” said Howland. “Different farm locations will be able to use the model and continuously adjust their turbine angles based on wind conditions.”