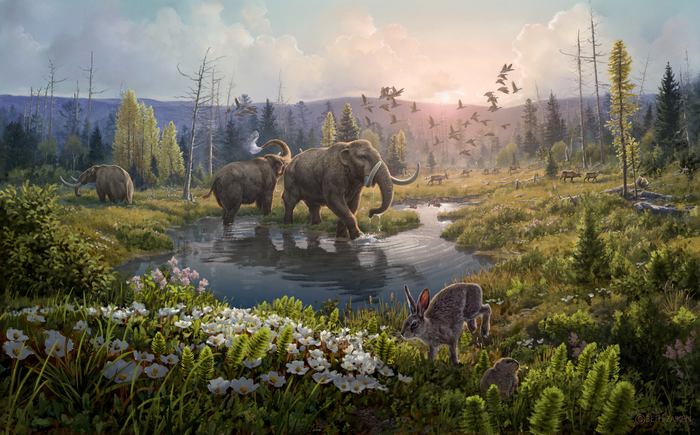 A team of researchers led by the University of Cambridge and the University of Copenhagen has recently identified two-million-year-old microscopic fragments of environmental DNA in Ice Age sediment in northern Greenland. By using cutting-edge technology, the experts discovered that these fragments are one million older than the previous record for DNA sampled from a mammoth bone found in Siberia.

Since this ancient DNA can now be used to map a two-million-old ecosystem which experienced extreme climate change, the result could potentially help predict the long-term environmental consequences of today’s global warming.

“A new chapter spanning one million extra years of history has finally been opened and for the first time we can look directly at the DNA of a past ecosystem that far back in time,” said study senior author Eske Willerslev, a geneticist at Cambridge. “DNA can degrade quickly but we’ve shown that under the right circumstances, we can now go back further in time than anyone could have dared imagine.”

“The ancient DNA samples were found buried deep in sediment that had built-up over 20,000 years. The sediment was eventually preserved in ice or permafrost and, crucially, not disturbed by humans for two million years,” added study lead author Kurt Kjær, a professor of Geogenetics at Copenhagen.

The DNA samples – collected from the København Formation, a sediment deposit nearly 100 meters thick from a fjord in the Arctic Ocean in Greenland’s northernmost point – suggest that the climate in Greenland two million years ago varied between Arctic and temperate and was about 10 to 17 degrees Celsius warmer than today.

The genetic analyses revealed evidence of animals, plants, and microorganisms, including reindeer, hares, lemmings, birch trees, and poplar trees, as well as proof that massive mammals like the Mastodon roamed as far as Greenland during that period.

Some of the DNA fragments were classified as predecessors to contemporary species, others could only be linked at genus level, and some originated from unknown species. These samples will likely help scientists build a picture of a previously unknown stage in the evolution of a range of species still in existence today.

Moreover, these findings could help predict how current climate change may possibly impact our planet in the future. “The Kap København ecosystem, which has no present-day equivalent, existed at considerably higher temperatures than we have today [but it] seems to have been similar to the climate we expect on our planet in the future due to global warming,” explained study co-first author Mikkel W. Pedersen, an assistant professor of Geogenetics at Copenhagen.

“One of the key factors here is to what degree species will be able to adapt to the change in conditions arising from a significant increase in temperature. The data suggests that more species can evolve and adapt to wildly varying temperatures than previously thought. But, crucially, these results show they need time to do this. The speed of today’s global warming means organisms and species do not have that time so the climate emergency remains a huge threat to biodiversity and the world – extinction is on the horizon for some species including plants and trees,” he concluded.