How young Emperor penguins survive after their parents leave them • Earth.com 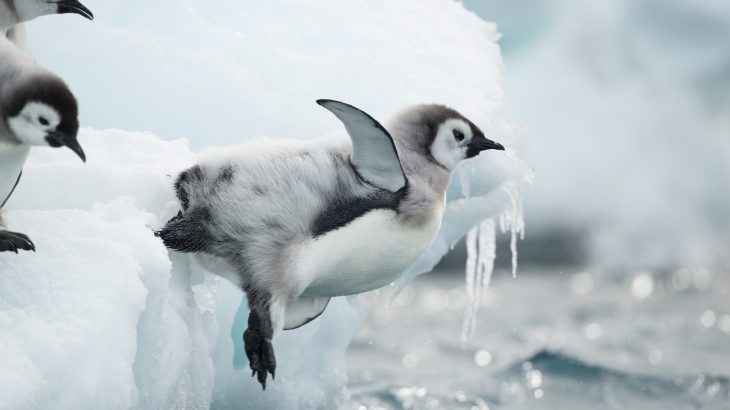 How young Emperor penguins survive after their parents leave them

A research team led by the Woods Hole Oceanographic Institution (WHOI) has monitored the behavior of juvenile Emperor penguins in the critical months when they leave their birth colony. The experts are sharing previously unknown details about when the penguins first learn how to swim, dive, and find food.

“This study provides insights into an important, but poorly understood, part of their life cycle, which is essential to being able to better predict the species’ response to future climate change,” said study lead author Sara Labrousse, a postdoctoral investigator at WHOI.

After just five months, Emperor penguin chicks are abandoned by their parents and left to fend for themselves in the harsh environment of Antarctica.

The investigation was focused on 15 juvenile penguins who were tagged before they left their colony in Terre Adélie as the weather started to get warmer, breaking up the ice and creating open waters near the nesting site.

The movements of the penguins, including diving and location data, were transmitted via satellite. Overall, more than 62,000 dives were recorded. The data showed that the juvenile penguins initially moved far north to reach warmer, open waters.

“This is when they are essentially learning how to swim,” said Labrousse. “That’s not something that their parents teach them. When they first go in the water, they are very awkward and unsure of themselves. They are not the fast and graceful swimmers their parents are.”

The researchers found that once the juvenile Emperor penguins became more experienced divers, they moved south and made deeper dives among the sea ice.

“That was something that surprised us because we didn’t previously know how long they were staying within the sea ice,” said Labrousse. “It turns out that they spend most of the winter diving beneath the sea ice.”

The thermocline, which is the layer of the ocean where warmer surface waters meet cooler waters below, begins to deepen in the fall. Labrousse explained that the penguins’ deeper dives were likely related to the depth of the thermocline and the seasonal change in the distribution of their prey.

“Juveniles stay at sea for five or six years before they return to the colony to mate,” said study co-author and WHOI biologist Stephanie Jenouvrier. “We need to better understand the dynamics of what happens during the time the juveniles are away from the colony. Understanding how they will respond to the changing landscape in terms of breeding and other life history stages is key to predict population responses and species persistence to future climate change.”

The study is published  in the journal Marine Ecology Progress Series.