What is Americium? • Earth.com 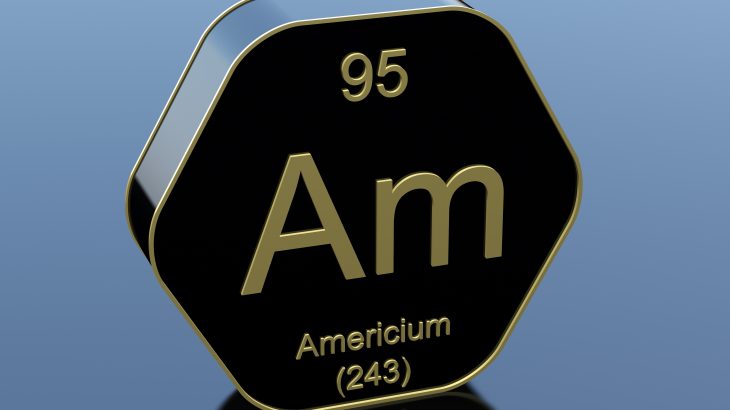 is a synthetic radioactive metallic element. The symbol for Americium is Am and the atomic number is 95. It is an actinide that was first isolated by Glenn T. Seaborg in 1944 while attacking plutonium with neutrons. It became the fourth transuranic (having an atomic number greater than 92) element to be discovered. It was named for the Americas. Am is widely used in commercial smoke-detectors and different types of industrial gauges.

Americium in its pure state has a silvery/white luster. In a dry area at room temperature it begins to slowly tarnish. In air it becomes AmO (Am-oxide). When it reacts with hydrogen it becomes AmH2. Unlike uranium, Am is hard to oxidize above the +3 oxidation state when in a liquid solution. However difficult, it still can be oxidized into +4 compounds. Americium is more silvery than plutonium and more pliable than uranium. It is not considered a weapons grade material as its critical mass is much larger than more readily obtainable plutonium or uranium.

Americium has several uses and is the only synthetic element to be used in household devices, mostly smoke detectors as Am-241. The amount of americium found in a new smoke detector is 9 billionths of 1 ounce or 0.28 micrograms. This amount decreases over time as the americium decays into neptunium. The americium in smoke detectors contain about 3% neptunium after 19 years, and 5% after 32 years. Americium-241 is also used in the medical and industrial field.

Gamma ray emissions from Am-241 can be used in radiography analysis and for quality control in manufacturing industrial gauges. These gamma ray emissions have also been used to provide accurate diagnosis of thyroid function. Am-241 can be combined with beryllium or lithium for other uses. 241AmBe is used in moisture/density gauges for quality control in highway construction. Other uses for americium include logging applications, nuclear propulsion and possibly as a neutralizing agent in plutonium reactor fuel rods to make the fuel unusable for nuclear weapons.

Americium emits both alpha and gamma radiation. Alpha decay is three times as active as the decay of radium. This substance is considered a serious health hazard.