What is Archean? • Earth.com 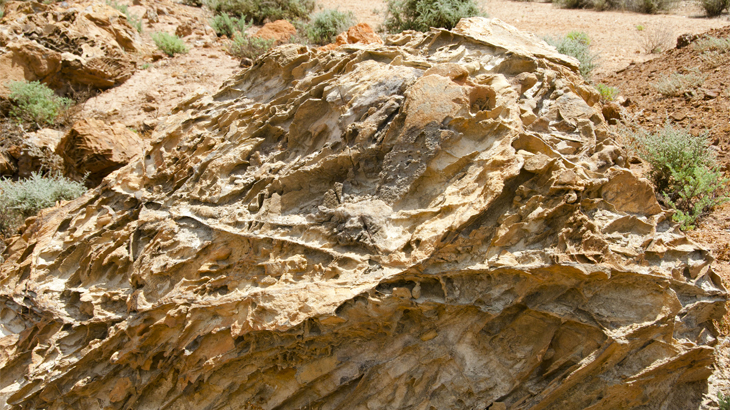 (formerly Archaeozoic) is a geologic eon between the Hadean and Proterozoic eons. The Archean Eon begins at roughly 3.8 billion years ago (Ga) and ends at about 2.5 Ga. But unlike all other geological ages, which are based on stratigraphy, The Archean eon is defined chronometrically. The lower boundary of 3.8 Ga has also not been officially recognized by the International Commission on Stratigraphy. The name Archean is derived from the ancient Greek (Arkhe), meaning beginning or origin.

The Archean is one of the four principle eons of Earth history. When the Archean began, the Earth’s heat flow was nearly three times higher than it is today. It was still twice the current level when the Archean transitioned to the Proterozoic. The extra heat was the result of

Most surviving Archean rocks are metamorphic or igneous. While volcanic activity was waning from the Hadean eon, it was still considerably more active than it is today, with numerous lava eruptions, including unusual types such as komatiite.

The early Archean may have supported strong tectonic movement unlike that seen in the present. Some scientists argue that, because the Earth was much hotter then, tectonic activity was more vigorous than it is today, resulting in a much faster rate of recycling of crustal material. This may have prevented continent formation until the mantle cooled enough slowing down convection.

But others argue that the oceanic lithosphere was too buoyant to subduct, and that the rarity of Archean rocks is a function of erosion by subsequent tectonic events. The question of whether plate tectonic activity existed in the Archean era is an active area of modern research.

The exact amount of continental crust present during the Archean is debated by two separate theories. One maintains that no large continents existed until late in the Archean, only smaller proto-continents, prevented from forming larger landmasses due to the high rate of geologic activity. The other theory follows that of Richard Armstrong, who argued that the continents grew to their present volume in the first 500 million years of Earth’s history, recycling of continental material crust back to the mantle in subduction or collision zones balances crustal growth. Opinions over Armstrong’s theory are divided.

Despite which theory is more accurate, it is generally accepted that rocks from the Hadean eon (older than 3800 million years old) had been either recycled back into the mantle or obliterated any isotopic record of their antiquity. All rocks in the continental crust are subject to metamorphism, partial melting and tectonic erosion. This occurs during multiple orogenic events and the chance of survival at the surface decreases with increasing age. Also, a period of increased meteorite bombardment from 4000 to 3800 million years ago pulverized all rocks on the planet during the period.

The atmosphere during the Archean eon is thought to have lacked free oxygen. Most astronomers believe that the sun had about 70-75 percent of its present luminosity. Yet temperatures appear to have been near modern levels even within 500 million years of Earth’s formation, which perplexes most experts. Certain rock structures and sedimentary protoliths from the time period indicate liquid water was largely present at least through part of the Archean eon. By the end of the Archean (c. 2500 mya) it is known that liquid water was largely prevalent, with deep oceanic basins. Geologists have found this evidence through the presence of banded iron formations and pillow basalts, among others.

Although only a few mineral grains are known from the Hadean era, all rock formations exposed on the surface are from the Archean period. Geologists have found Archean rocks throughout the world, in Greenland, Scotland, Brazil, India, Australia, and other regions. While the first continents were formed during the Archean, rocks of this age made up only 7 percent of the world’s current lithosphere.

The Archean eon, despite limited oxygen supplies, did carry early life. Stromatolites were instrumental in creating the first signs of free oxygen in the atmosphere. They can be found throughout the Archean, becoming increasingly common late in the eon. However, a limited number of bacterial fossils are known from this period. While life was most likely present throughout the Archean, it was mostly limited to simple non-nucleated single-celled organisms (Prokaryota). There are no known eukaryotic fossils, although experts think they may have evolved during this eon without leaving a fossil record. Also, no fossil evidence of ultramicroscopic intracellular replicators such as viruses has been found.