What is Californium? • Earth.com 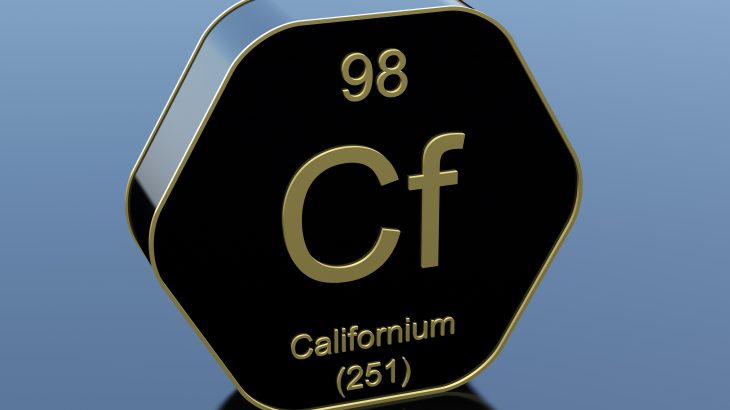 is a metallic chemical element. It has the symbol Cf and the atomic number 98. This is a radioactive transuranic (atomic number greater than 92) element. Californium is used for starting nuclear reactors, optimizing coal power plants, the treatment of cancer, and oil drilling. It was first produced by bombarding curium with helium ions. It was first synthesized in 1950 at UC Berkeley. Californium was the 6th element found with an atomic number higher than 92. It was named after the American state of California and for UC Berkeley. Since the discovery of Californium in 1950, only 0.28 ounces of the compound Cf-252 have been produced in the USA. In 1958, the United Kingdom supplied the USA with plutonium which was used for producing the compound.

Californium also has 20 known isotopes. The most stable is Cf-251 with a half-life of 898 years. Cf-249 has a half-life of 351 years, and Cf-250 has a half-life of 13 years. The remaining isotopic compounds only have half-lives no greater than 2.7 years. Most of those only have a half-life of less than 20 minutes. The isotopes of californium range in atomic mass from 237.062 ( Cf-237) to 256.093 ( Cf-256). Although californium is not found naturally on Earth, it occurs elsewhere in the universe. Californium was included in the fallout of a United States hydrogen bomb test on November 1, 1952. Other elements that were among the fallout were plutonium and einsteinium.

Cf-252 is highly radioactive and very harmful. Cf-249 and most of the other isotopes of californium are produced by exposing berkelium to intense neutron radiation in a nuclear reactor. There is no biological role for californium, and few compounds have been produced and studied. Californium oxide, californium trichloride, and californium oxychloride are a few of the produced compounds.

There are some applications that readily use californium’s radioactive nature; however, due to its difficulty of being produced on a large scale, widespread use is quite rare. Some of its uses are ignition of some nuclear reactors, calibration of instrumentation, treatment of certain cancers, radiography of aircraft structures, and portable metal detectors. It is also used in neutron moisture gauges and analytical equipment in gold prospecting. The compound Cf-252 is used for detecting ground water movement. In October 2006 it was also announced that there were made attempts to produce ununoctium by bombarding Cf-249 atoms with calcium-48 ions. This became the heaviest element ever synthesized.

The compound Cf-251 has been seen as a potential use for nuclear weapons as it has very low critical mass, high lethality rate, and short period of toxicity to the environment as opposed to other radioactive elements. Some of its possible uses in weaponry are seen as inhumane and therefore may not be implemented.