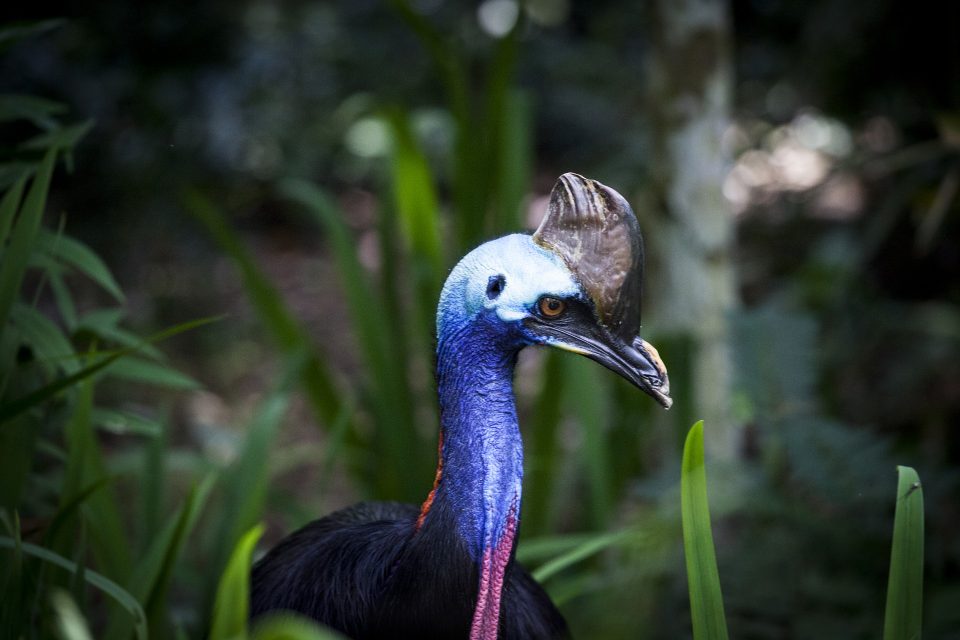 Cassowary Birds Are Not Friendly Pets

While all bird species are modern-day dinosaurs, cassowaries need a little less convincing. Despite their striking appearance and similarity to often domesticated species like emus and ostriches, we must face a powerful truth. Cassowaries do not make friendly pets. In fact, cassowaries are rumored to be one of the most dangerous animals! But is this ferocious stereotype true? Yes…and no. Read along to learn more about these avian giants and why they’ve garnered such a  fierce reputation.

Monsters! Dinosaurs! …Birds? What Are Cassowaries?

A dazzling triad of birds, cassowaries live in a relatively small part of the world. They are only found in New Guinea and on a few surrounding islands with a couple of subpopulations of the southern species in Northern Australia. Similar to ostriches and emus, cassowaries are large, flightless birds. 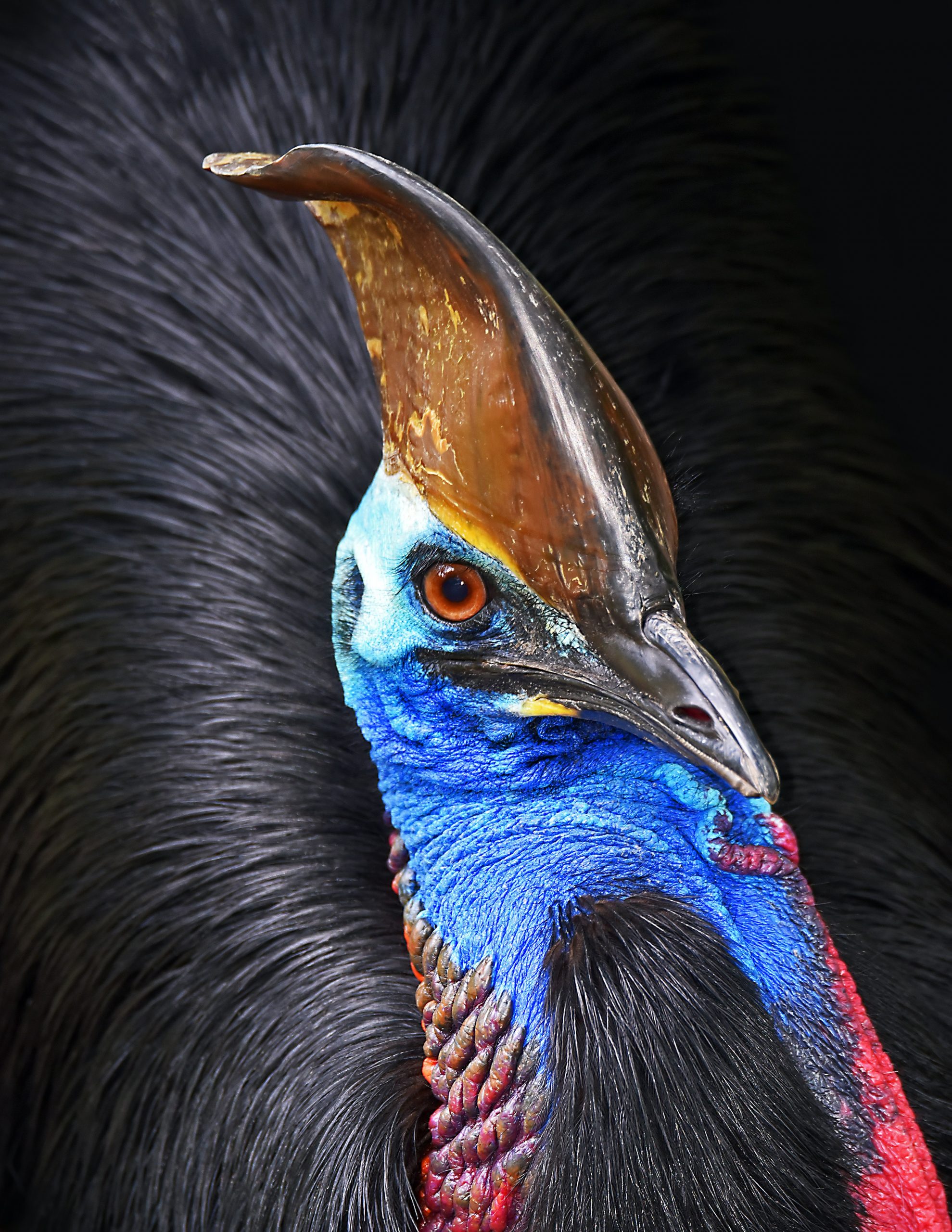 Cassowaries have large casques on their heads. [Image by David Clode on Unsplash]

With vivid color choice and a statement headdress, cassowaries are nothing short of fashionistas. Three of their attributes make them truly unforgettable.

There are three species of cassowary. Learn more about the unique characteristics of each below:

Fun Fact: Cassowaries make an array of different sounds from hisses to grumbles. Their low rumble is the lowest frequency sound of any bird species. Humans can barely hear it! 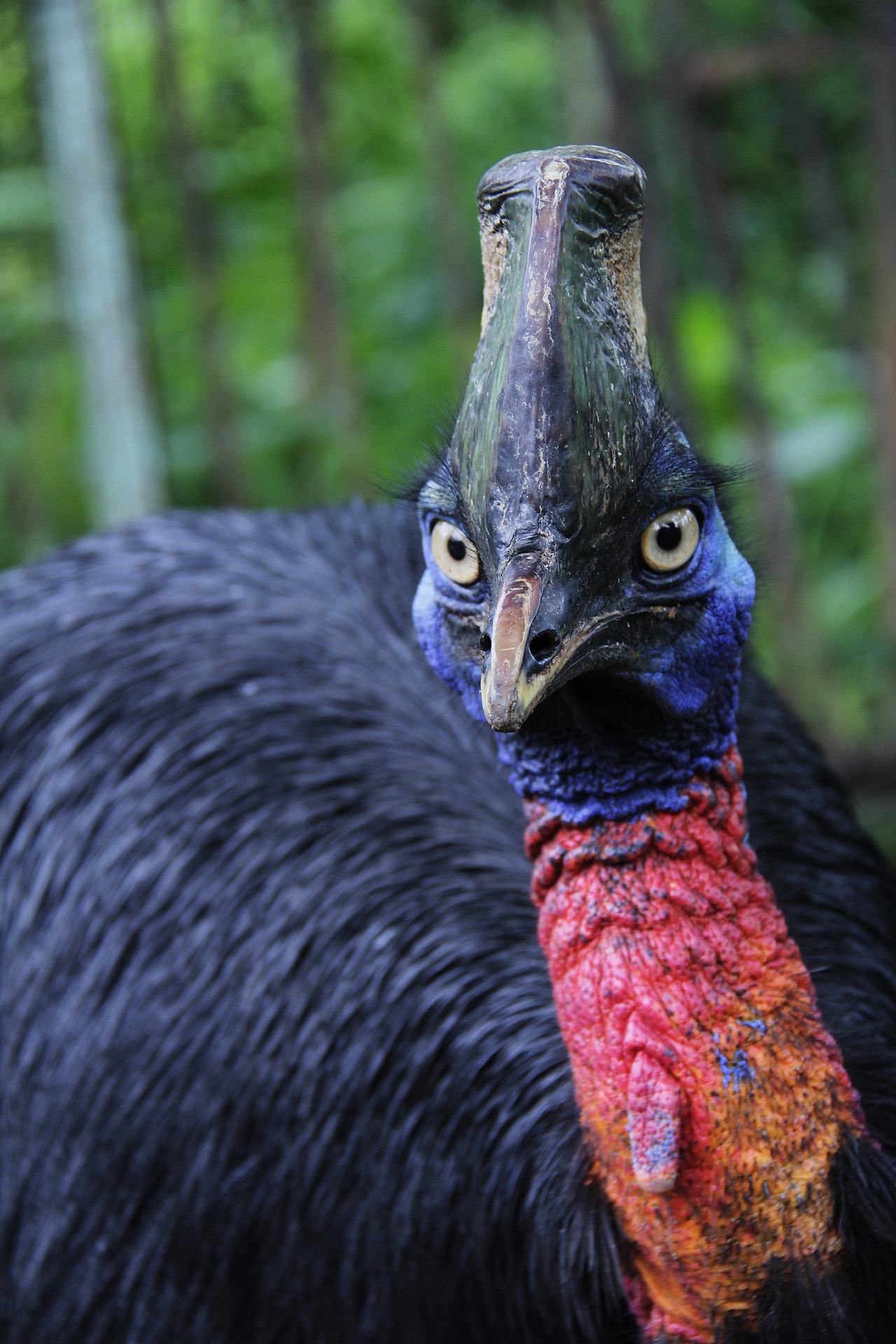 [Image by Panji Arista from Pixabay.]

Romping in the Wild

Before we get into why you shouldn’t keep one of these fabulous birds as a pet, let’s take a closer look at some key aspects of their ecology.

Cassowaries are frugivores, meaning they eat the fruit, seeds, and nuts that are plentiful in their rainforest homes. As some of the largest frugivores in their ecosystems, they are able to eat larger fruits than other animals in their community.

Fun Fact: The seeds of some tree species are much more likely to sprout after passing through the digestive tract of a cassowary!

For most of the year, cassowaries are solitary. They prefer to amble the forest alone rather than socializing with other avian giants. Notably, females are larger than males. If two males run into each other in the forest, they may scuff and grumble until one decides to back down. However, if a male encounters a female, he’s going to run away as fast as he can. Often 40lbs heavier than the males, females are a force to be reckoned with!

The only exception to this fear-response is during the breeding season. The females tolerate the males for a couple of weeks until they lay a clutch of eggs. Then it’s back to roaming the forest! They leave the males to incubate the eggs and care for the young.

The Dangers of Cassowaries

It’s clear that these dazzling specimens prefer to spend their time in solitude. So what’s with their notoriety? Cassowaries have garnered the reputation of being one of the most dangerous birds. Apart from a freak incident with a rooster, cassowaries and ostriches are the only birds known to have killed humans. But with humans infringing more and more on cassowary habitat, we are left wondering if these attacks are malicious or out of self-defense? 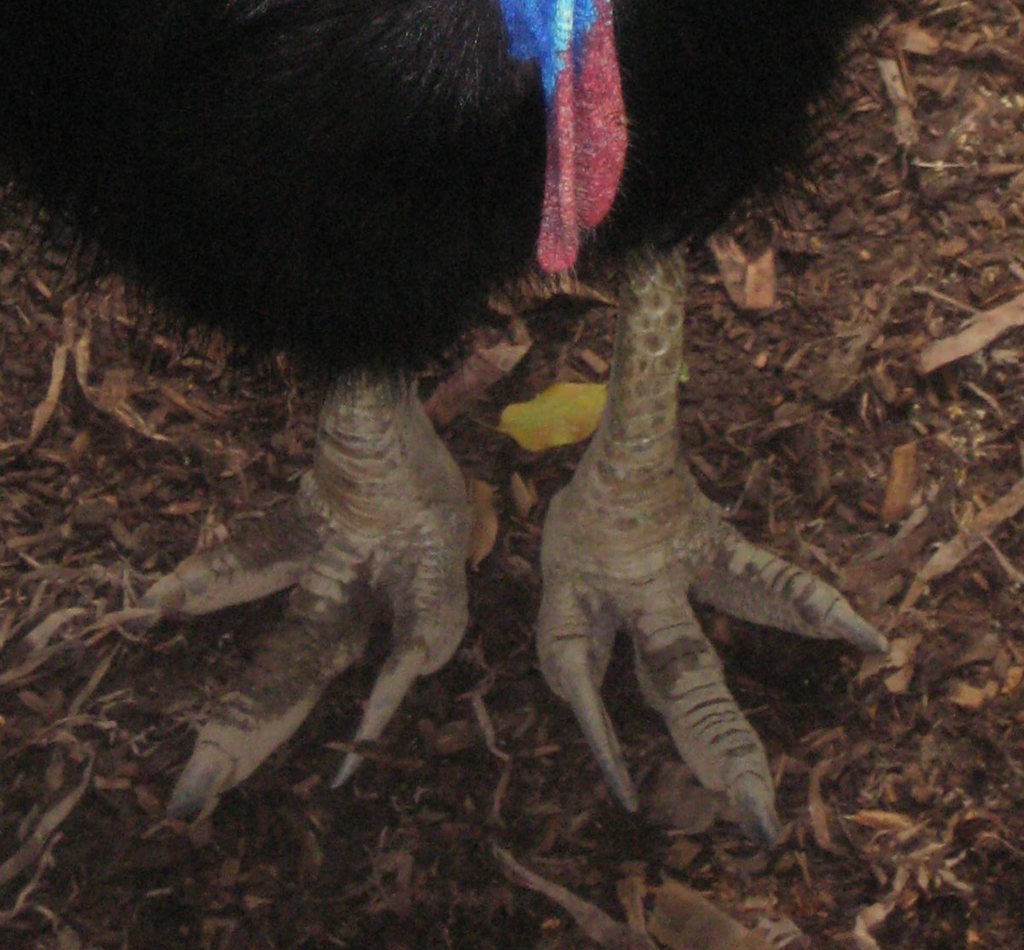 The inner toe on each foot has a four-inch-long claw. [Image by Stephan Schulz from Wikipedia Commons]

A Sharp Claw and a Swift Kick

To put it bluntly, cassowaries have daggers on their feet. One toe on each foot has a four inches long claw! Powering those claw are strong legs that can deliver swift and bone-breaking kicks. Beyond that, cassowaries can sprint up to 30 miles per hour, so don’t plan on out-running one in a foot race.

Running isn’t where their superpowers stop. They are agile swimmers and can jump upwards of 6 feet in the air.

Fun Fact: Aside from a defense mechanism, cassowaries’ giant claws are especially useful when foraging. They can dig through leaf litter and roots to find the tastiest snacks.

The Attack of the Cassowary

The fear of cassowaries stems from a blood-stained history of attacking people, dogs, and sometimes even horses. There have been upwards of 150 documented attacks on people, with a few even ending in death. However, it’s important to note the trends behind these attacks. Here are some of the reasons behind the attacks along with some tips to keep yourself and the birds safe.

Overall, cassowaries will attack humans, but fatalities are rare. However, the increase in altercations seems to result from the mirrored increase in exposure. So keeping cassowaries as pets is far from a good idea.

Further, humans pose even more of a danger to cassowaries than they do to us. Many are killed by traffic and feral dogs, and even more are threatened with the loss of habitat due to human development. Since we can’t keep these giant birds as pets, we should do as much as possible to help keep cassowaries thriving in the wild.